Since I’m a lawyer and I like video games, I figured it would be a good idea to start a new series in which I analyze hot legal issues in the gaming world. My focus will be on American law, since that’s what I’m trained in, though I won’t ignore foreign law when it enters the picture. 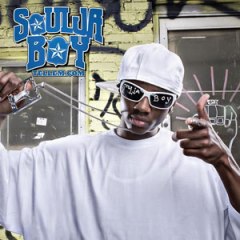 This album sucks. I give it a 1. That counts as a full review, right?

In this first edition, we’ll be taking a look at a real gem: Soulja Boy. It’s long been an axiom that Soulja Boy’s music sucks, so much so that scientists are still working around the clock to determine how it hasn’t yet created a black hole large enough to swallow most of the inner Solar System. But this post isn’t about Soulja Boy’s music – it’s about his possible lack of knowledge of copyright law.

I don’t blame a guy for not understanding the ins and outs of US copyright law. It’s a complicated field. I do blame a guy, however, for not at least understanding that selling a console packed full of ROMs that are indisputably the intellectual property of first- and third-party publishers without a license to do would amount to criminal piracy under United States law. I assume Soulja Boy has attorneys to deal with the protection of his own intellectual property who are available to advise him of that. Maybe his legal team secured licensing agreements with every one of the copyright holders of the supposed 800+ preloaded games on his SouljaGame console and the supposed 3,000+ preloaded games on his SouljaGame handheld. That’s entirely possible, and I’m not saying it didn’t happen. But considering how defensive our dear Drako has been getting on Twitter… well, just read the following:

For anyone that thinks Nintendo is going to sue me you’re retarded. Nothings going to happen everything is legit. My console isn’t going anywhere trust me 😁

In a now-deleted tweet, Soulja Boy also noted that he’s “not afraid of Nintendo” nor of “faggot nerds” (his words, not mine.)

Not really the kind of thing you’d say if you had secured a licensing agreement with Nintendo, is it? Again, maybe he did and he’s just acting like a dick on Twitter for no reason.

Hey, to change the subject completely, were you wondering what the United States Code has to say about monetarily profiting off of someone else’s intellectual property without a license from the copyright holder? 17 USC § 506(a)(1)(A) states that “[a]ny person who willfully infringes a copyright shall be punished as provided under section 2319 of title 18, if the infringement was committed for purposes of commercial advantage or private financial gain.” The statute requires a finding of willful behavior – basically meaning that the subject of prosecution knew what he was doing and intended to do so – but establishing knowledge and intent in a case like this isn’t too difficult. And what kind of punishment does section 2319 provide?

The above-mentioned fine is set forth in 18 USC § 3571(b)(3) at not more than $250,000.  None of this counts the civil penalties that can be levied against the copyright violator in a separate proceeding.

Sorry for going off on a totally unrelated tangent like that. I just thought it was interesting.

By the way, these “SouljaGame” lumps of plastic dogshit seem to be pretty much identical to the myriad bootleg multigame consoles and handhelds that are manufactured and sold in Chinese and southeast Asian markets. Those systems are definitely illegal to sell, and the only reasons they continue to sell are the sheer number of different types of bootlegs sold and the difficulty of suing/prosecuting violators in the countries they flourish in. Hell, they even sell on Amazon. Like this fifteen dollar handheld containing hundreds of NES ROMs. There’s no way Nintendo signed off on this, but I can’t imagine they care too much about some podunk company selling crappy cheap handhelds with 30 year-old games on them, even if they are Nintendo properties. Soulja Boy’s products, on the other hand, have garnered attention all over the world. And if that sales figure of five million Soulja himself cited on Twitter is anywhere close to accurate, I can’t believe Nintendo (or SEGA, or EA, or Activision, or fill in the blank) is going to ignore them.

Just to be clear, I’m not saying that Soulja Boy is a pirate. I am legally allowed to call Soulja Boy a talentless asswipe, because that’s a statement of opinion and not a statement of fact or a legal conclusion. But I’m not saying he’s a pirate. Yes, it seems like he’s profiting off of the sale of what looks suspiciously like a pair of bootleg game systems containing a few thousand games, but again, it is entirely possible that he and his legal team ensured everything was legit by securing licensing agreements with each one of those games’ copyright holders. Here’s hoping they did for his sake.