A review of Asobi Asobase

I’m back! More or less, anyway. The hiatus I planned was much shorter than expected for various reasons. These mainly have to do with changes to my life that I can’t really ignore anymore, though thankfully they won’t prevent me from writing here or anything like that. Just the opposite, in fact, but it’s a bit complicated. I might get into it later. And I will be posting an extra-long month-end post for July to make up for skipping the last month’s, I promise.

For now, though, I have anime to write about. Because I spent the time in between work and dealing with other unpleasant business this last week and weekend binging the fuck out of anime series, one of which was Asobi Asobase.

Back in the mid-2000s, there was a spate of anime series released that fell into a newly created genre titled “Cute Girls Doing Cute Things.” Sometimes just shortened to CGDCT, this is a widely recognized genre among anime fans, and one that I don’t think really exists outside of anime and manga. And it’s just what it sounds like: a CGDCT series involves a cast of cute girls, and they’re doing cute things. Like playing games, for one example.

From looking at its poster and synopsis, I thought Asobi Asobase fell into this category, so I passed it by. Cute is fine and all, but these shows tend to be a bit boring to me. But something about this show in particular drew me back. Not sure what exactly did it; maybe I was curious about it because it came out in 2018, long after that CGDCT craze died down, or maybe it was a few of the strange-looking thumbnails in the episode list. In any case, I decided to watch the first episode.

And then I realized I’d been tricked. At first, I wasn’t sure whether what I got was better or worse than what I’d expected, but then I ended up watching the rest of the 12-episode series over the course of two days, so there’s the answer to that question I suppose.

Wait, this wasn’t what I expected at all! Help!

The creators did a great job of hiding the show’s true nature, at least until a few minutes into episode 1. The OP is charming and cute with a slight yuri vibe, giving the impression of just the kind of CGDCT show I was expecting. Right away, however, we’re introduced to our main cast, and it’s obvious that something is off here. We open on Kasumi Nomura (right w/ glasses), a student at an all-girls middle school, explaining why she hates playing games with a flashback involving her shitty older sister forcing her to buy ice cream when she loses at a board game.

Much to her irritation, this flashback is interrupted by two of her classmates, Hanako Honda and the blonde transfer student Olivia. The pair are playing a game that involves slapping your opponent (at least according to Olivia it does) if they look in the direction you’re pointing.

Kasumi is dragged into their game by Hanako out of a desire to avoid further beatings, and Olivia gives Kasumi a good slap when she loses (or doesn’t lose? Because I think Olivia is slapping all her opponents no matter what they do.) However, Olivia screws her aim up, slapping Kasumi slightly lower than intended in a more sensitive area, and pissing her off to the maximum. So when Kasumi wins the next round, she decides to teach this new girl how to play this game properly.

Not the smoothest introduction. However, Kasumi approaches Olivia soon after to try to get her help with English, which she’s terrible at. Olivia’s parents are from overseas, and her Japanese so far has been pretty slow and broken, so everyone assumes at this point that she’s fluent in English.

This puts Olivia in a tight spot, because the opposite is true: she’s actually fluent in Japanese, having been born and raised in Japan, and she can barely speak English. She’s just been fucking with Hanako and the rest of the class because she thought it was funny. Now that she’s actually being asked to help with English, she’s afraid to drop the act she started, so she agrees to help Kasumi — as long as Kasumi teaches her about more games and pastimes. Olivia’s picked up on the fact that Kasumi hates games, so she thinks her demand will be refused, but to her shock, Kasumi accepts the deal. And before the end of the episode, the three decide to start a school club dedicated to playing games (and/or studying English?) called the Pastimers’ Club.

A few minutes past the OP of the first episode, then, it’s already obvious that Asobi Asobase isn’t quite what it claims to be at first. On the cover, it pretends to be one of those old CGDCT shows, but it’s actually a surreal comedy with a dirty streak. What follows is a 12-episode run full of mind games, revenge, blackmail, power struggles with the student council and rival clubs, competitions ending in humiliation and severe injury, and a man who shoots laser beams out of his ass. The series adds an entire cast of bizarre supporting characters to help play these bits out (including ass laser man; you’ll see how he fits into the equation if you watch.) But the focus is always on the main three Kasumi, Hanako, and Olivia and their games, which too often turn into larger, usually idiotic, schemes.

This kind of bizarre stuff doesn’t always work for me, but as I’ve already more or less given away, Asobi Asobase did very much work for me, and I think a lot of that had to do with this central cast. Kasumi, Hanako, and Olivia quickly become friends, but they also have to deal with each other’s strange quirks. That’s where most of the comedy here comes from for me. Kasumi is studious, neurotic, and usually shy and quiet except when she gets pissed off (see above), and Olivia is carefree and generally out of it except when her public image might be at risk, in which case she panics.

But the most out-there character is Hanako. So out there that she might be the one who either pulls you into or shuts you out of Asobi Asobase. At first, I found her to be a bit much, but she quickly grew on me even if I’m still not sure why. Hanako is subdued (relatively at least) in the very beginning of the show, but we soon see how much of a weirdo she is — so much so that despite making high grades and being from a rich family with such a privileged upbringing that she has a butler, she’s shunned by the popular girls. 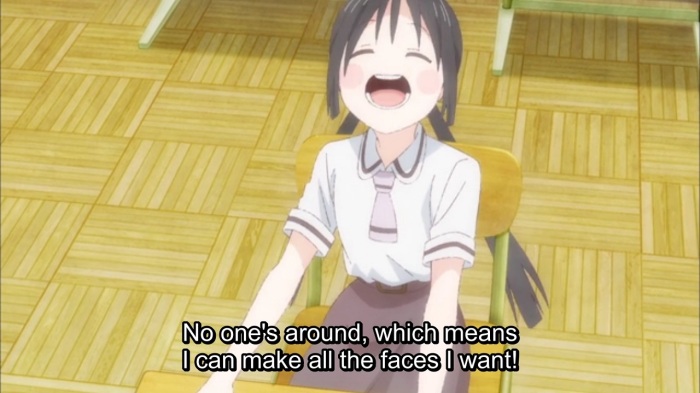 This is a serious problem for Hanako, who desperately wants a boyfriend and both envies and hates the popular girls at her school for getting to go to mixers while she’s shut out of the fun. She’s also a bit of a complete and utter nutbar, though judging from my own middle school experience and my blessedly brief time as a sort-of-teacher she’s not actually that unusual for a kid her age.

Unfortunately for Hanako, both she and her clubmates are sort of weirdo misfits — the difference between them and Hanako is that Kasumi doesn’t really care and Olivia is seemingly too oblivious to even notice. So Hanako lets herself go around them, resulting in some of the strangest (and loudest) sequences in the show. I’ll admit she screams a little bit too much for me, but I enjoyed some of her freakouts, and especially her friends’ reactions to them.

The other two also have plenty of moments.

There isn’t much of a plot to Asobi Asobase. There are a few running storylines that come up now and then, but each episode is broken into four segments that are usually not connected to each other, which I think fits the type of fast-paced weirdo surreal comedy it’s going for well. The show as a whole is crazy, but there’s enough sense left in it to prevent things from going off the rails completely, which is where it would probably lose me, and I think this quick four-part format has something to do with that. These segments often end with a punchline and occasionally with a character breaking the fourth wall, but thankfully the fourth-wall-breaking doesn’t happen so often that it gets irritating.

There isn’t a type of humor that works for everyone, and that’s just as true of comedy anime series as it is of western TV comedies. Asobi Asobase is sometimes loud and often insane, but it fits really well with some of the sort of comedy I like. It feels stupid but at the same time clever and thoughtfully put together if that makes any sense. Something like Beavis and Butthead or South Park. The presentation is similar in the sense that it can be a bit shocking at times (and serious credit to the voice actors as well, because they contribute a lot to that) and the tone is pretty similar.

Or maybe I’m going way too far out on a limb with these comparisons, but this is just the vibe I got watching this. I think if you’re into the above shows, you’ll probably enjoy this series as well. And if you can’t stand Cute Girls Doing Cute Things, don’t worry, because that’s not really what Asobi Asobase is — at most it’s a surrealist take on that genre. So maybe people who are into CGDCT can appreciate Asobi Asobase even more than I can in that sense.

And as a look into the pure chaos and terror that is middle school, Asobi Asobase might be the most realistic anime ever created.

So I guess that’s a recommendation too. This currently one-season show didn’t have a proper finale really, simply ending on yet another weird joke, but the manga it’s based on is still running, and there’s talk about a second season possibly, maybe, who knows. I’m hoping for a second season myself, because I can use more of this strange brew, but anime watchers know how these things can go. I’m not holding my breath, but I’ll keep an eye out.

4 thoughts on “A review of Asobi Asobase”