What the fuck did I just watch? 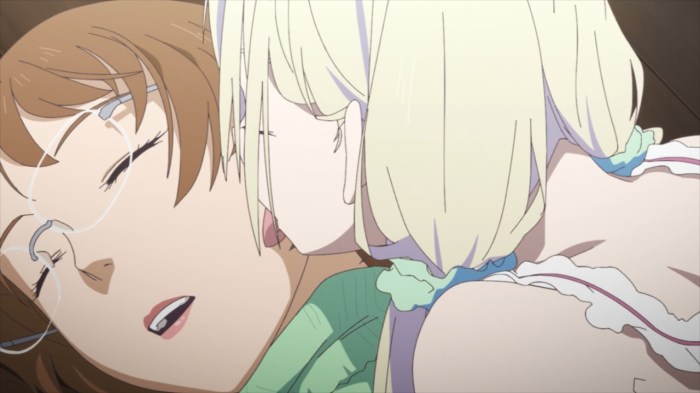 I know how this looks, but it’s not what you think

Summary: Tilarna and Kei confiscate a shipment of illicit Semanian goods.  While Tilarna inspects them to sniff out any latena that might be in there, Kei’s cat Kuroi accidentally shoots Tilarna in the arm with a miniature crossbow in the collection that somehow transfers her consciousness to Tilarna’s body and Tilarna’s to hers.  “Tilarna” wakes Kei up the next morning by crawling into bed with him and trying to lick his face much to his confusion, but the real Tilarna in cat form freaks out and stops her.

Kei thinks Tilarna has just come down with a weird illness and leaves her to sleep it off while taking out the trash on the way to work (the crossbow also toppled into the trash can, so now it’s out in the dumpster.)  In a panic, cat-Tilarna texts Cecil that she and Kuroi have switched minds and asks her to come over and get the crossbow out of the trash, because she needs it to return to her own body, but not to tell Kei anything.  Cecil gets the gist of what’s going on after cat-Tilarna frantically gestures for a few seconds and uses her cell phone to write out messages.  Unfortunately, when Kuroi sees Cecil, she leaps on her, accidentally knocking her out.  When Cecil awakes, the dumpster is empty.  Cecil and cat-Tilarna take off to follow the garbage truck, but not before Cecil is forced to run back inside to close the blinds because Kuroi in Tilarna form is currently roaming around Kei’s apartment half-naked. 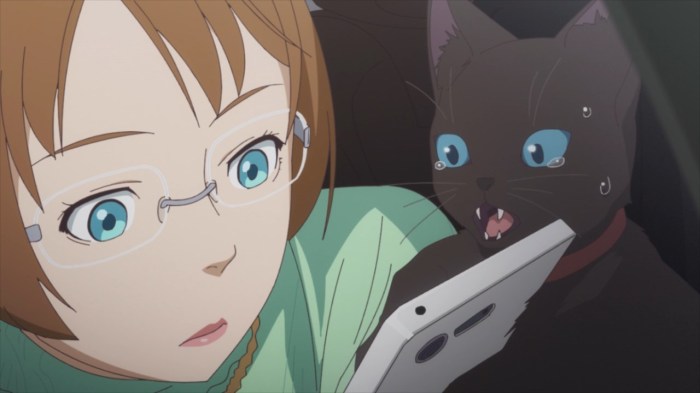 MY ASS IS HANGING OUT OF THE WINDOW, PLEASE FUCKING CLOSE THE BLINDS

And would you believe it?  For this episode, there’s a fucking cliffhanger ending as the garbage truck passes by their car while Cecil is in Kei’s apartment, and then she drives in the opposite direction.

Analysis: It’s not much of a cliffhanger if you ask me.  There were certainly a lot of stupid coincidences that came together to cause this problem, but we know Tilarna and Kuroi are going to get back into their own bodies in the end.  Unless this is going to become a show about a cop and his cop cat partner.  Like Turner & Hooch, only Hooch is a cat.  Now that would be a shitty twist.

I guess this episode, and probably the next one where Tilarna and Kuroi switch places again, are the big fanservice episodes of the season.  I have to admit I didn’t see this coming at all.  I was thinking more like a beach episode, not Tilarna crawling around like a cat in her underwear and taking a dump in a litter box (this actually happens in the episode, though the camera tastefully pans away while cat-Tilarna looks on in horror.)  I know I’ve pretty much admitted to being a weirdo who likes catgirls, but this isn’t what I had in mind.

Wait, the cat’s name is Chloe? The subtitles call her Kuroi.  Whatever, I’ll keep going with Kuroi since I’ve been using it this whole time

I don’t have much else to say this time.  I can see some people being put off by this episode, I guess.  I’m still on board, of course, but it was definitely a strange one.  If you’re still on board too, I’ll see you next episode.  Until then, stay safe, and try to avoid getting shot by a magical crossbow that can switch your mind with a cat’s mind.