Avoiding the Poochie Effect, or why I’m slightly nervous about Persona 5 Royal

I guess this post won’t be of any interest to you if you haven’t already played or were never planning to play Persona 5, but either way, you’ve likely heard that it’s getting an expansion/director’s cut in the form of Persona 5 Royal, to be released next year.  See above for the new trailer released during E3 this week complete with English dubbing.  This is nothing new for the Persona series; Persona 3 and Persona 4 went through the same process.  The results have been good so far: Persona 3 FES and Persona 4 Golden were both excellent games that added to the experience of the originals, and I believe Persona 5 Royal will be just as good.  However, any time a new character is announced to be added to the main cast, there’s a risk that character will fall victim to the Poochie Effect.

I guess I can’t just assume everyone knows what I’m talking about.  Especially if you’re in your early twenties or younger and you don’t remember a time when The Simpsons was funny or relevant.  To find such a time, we have to go back to 1997 and Season 8 of the series (well, Seasons 9 and 10 had their moments too) to the episode “The Itchy & Scratchy & Poochie Show”.  This episode is centered around The Itchy & Scratchy Show, an in-universe popular and extremely cartoonishly violent show that I think was meant to be the writers’ take on Tom & Jerry and similar stuff.  The TV executives in charge of the show decide to spice it up with a new character, a talking dog named Poochie, to add to the original ultraviolent cat and mouse duo (of course voiced by Homer, despite Homer being a pretty lousy voice actor.)  However, the audience reaction to Poochie isn’t quite what those executives expected.

Poochie ends up backfiring on the studio so badly that the executives famously axe the character in the following episode by sending him to his “home planet” and saying he died on the way just for good measure.  The audience hated this character so much that they cheer his death, and Itchy & Scratchy immediately wins that audience back as a result.

This Simpsons episode addresses the pitfalls of adding a character to an already established and beloved cast.  Said new character has to prove that they’re just as worthy of the audience’s love as the rest of the cast, so character traits that could be perceived as annoying or obnoxious work against them even more than they would had they been around from the beginning.  Even worse if members of the original cast spend time with and fawn over the newcomer for seemingly no reason other than that they’re a new character who needs screen time.  For a real-life instance of this very thing, look up Scrappy-Doo, Scooby-Doo’s annoying puppy nephew who Hanna-Barbera inserted into the existing cast of Scooby-Doo and who the actual real-life audience hated.  In fact, it seems likely that Poochie is a direct reference to Scrappy-Doo, since that show was airing when some of the Simpsons writers would have been kids.  In any case, the warning is clear: if you’re going to write a new character into your story, make sure they don’t come off like a writer’s pet who only exists to be praised by everyone around them for no reason.

So what’s any of that got to do with the Persona series?  It’s probably obvious at this point that I’m talking about Marie from Persona 4 Golden.  Marie was a completely new character who wasn’t even mentioned in the vanilla version of Persona 4 because she almost certainly didn’t exist at that time, not even as a concept.  Despite first meeting her in Inaba, the town P4 is set in, the protagonist discovers that Marie is actually connected with the Velvet Room, an extra-dimensional space managed by Igor and his assistant Margaret where he can fuse Personas and all that business.  However, Marie isn’t exactly a Velvet Room attendant like Margaret or her siblings.  Her role in Persona 4 Golden is quite different.  I won’t get into what it is exactly, but Marie does figure into one of the side-plots inserted into P4G, and also the protagonist can romance her, because it’s a Persona game and of course he can. 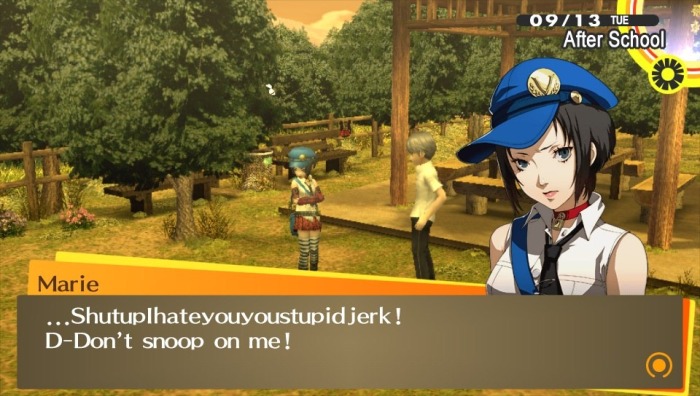 It’s just not worth it, Souji.  Trust me.

While Persona 4 Golden turned out to be a hit – seemingly one of the few on the Vita – Marie was most definitely not a hit.  She’s one of the very few characters in the Persona series who’s outright hated by a lot of fans.  Why?  It could have to do with the fact that she acts like a temperamental teenager throughout most of the game, or that she writes poems of exactly the type a temperamental teenager would write that you’re forced to read every so often when you enter the Velvet Room.  Or that despite her irritating qualities, the members of the Investigation Team who make up the main P4 cast all seem to like her for no real reason, other than that she’s hanging out with the protagonist.

Whatever the case, a lot of fans really disliked Marie.  The only other major character in a Persona game who draws this much ire from the audience is probably Yukari Takeba from Persona 3 because of her haughty attitude, but Yukari is around from the very beginning of Persona 3, while Marie is a newcomer to the cast in Golden.  So Yukari more or less gets a pass, while Marie doesn’t.  The funniest part of all this is that unlike the studio executives in The Simpsons, Atlus hasn’t sent Marie back to her home planet.  She’s appeared in almost every P4 spinoff released since, including Persona Q, Persona Q 2, Persona Arena Ultimax, and Persona 4: Dancing All Night, either as a DLC character or a character in the game proper.  Maybe the Japanese fans who make up the primary market for these games don’t hate Marie at all, or maybe Atlus just doesn’t care.

That brings us to Persona 5 Royal.  Almost all of the buzz surrounding P5R is centered on Kasumi Yoshizawa, the new cast member.  Not much is known about Kasumi aside from what we’ve seen of her in the trailers: that just like Akira, she’s a transfer student to Shujin Academy who has Persona-summoning abilities.  It’s pretty obvious that Kasumi joins the Phantom Thieves at some point in P5R, but what’s not clear is whether she’s a true friend or an enemy planning to betray the group.

She also has a huge appetite.  Just look at that lunch, it’s practically packed in a damn shipping container.

Since this character was made public, she seems to have gotten nothing but love from the fans.  However, since we don’t really know anything about Kasumi’s characterization or her role in the story yet, who’s to say she won’t fall into the same trap Marie did?  Character quirks that would normally be endearing can become irritating under the wrong circumstances, and Marie’s quirks fell into that latter category for a lot of players.  Just like Marie, Kasumi has to convince the player that she’s worthy of joining a beloved cast of characters.  The fact that the fans like her now might turn out to be a moot point.

Hell, this whole post might be moot.  Kasumi looks like she’ll be a cool character.  She seems to be a cheery, spunky kind of girl, and people like that.  Either way, I’ll be preordering Persona 5 Royal.  Because I’m an idiot who will buy anything Atlus puts out, but also because Persona 5 was really good, so the expanded version of P5 has got to be good as well, even if Kasumi ends up falling flat on her face in terms of fan reception.

School counselor Takuto Maruki is also a new character, but because he’s not a cute girl, nobody cares. Sorry, man.

So either Kasumi turns out to be a hated character and this was prophetic, in which case I won’t be happy because I want to like her, or she doesn’t and I just wrote 1,300 words about nothing at all.  This is what happens when I have a sick day and can’t go to work: I drink Robitussin and write nonsense.  Hell, I didn’t even hate Marie that much myself, and I’m sure there were players who liked her.

I’m going back to bed.  You can chalk this one up to a case of delirium.  Do your best to avoid summer colds, everyone.

7 thoughts on “Avoiding the Poochie Effect, or why I’m slightly nervous about Persona 5 Royal”