For those of you who were wondering, I’m still alive (I know one of my recent posts might have put that into question.) Since I quit my last job, I’ve been working as a contractor, which a lot of people don’t realize is something a lawyer can do. I’ve been told this work will be a black mark on my resume, but I don’t care. I’m not that suicidally depressed anymore, and I’m making just as much money as I was making before. What the hell is wrong with that?

Since I’ve been driving around a lot, that time mostly spent sitting in big city rush hour traffic, I’ve also had time to listen to a lot of new music. And since I attended a con last month and bought a stack of imported albums, this arrangement has worked out nicely for me. I’ll be writing some posts about the albums I picked up and why you might or might not want to check them out yourself, but first I’d like to share a list of video game BGM tracks that hold a lot of nostalgic power for me. These aren’t my favorite game tracks ever, but rather those that take me back to a simpler time when I was still pretty miserable, but in a different way than I am now.

Anyone who played the Dreamcast MMORPG Phantasy Star Online has this song permanently stored in his head like I do. It’s one of my favorite character creation menu themes ever (or at least one of the few I remember, which says a lot in itself.) The soundtrack to PSO is an all-around great one, especially for the level of pure atmosphere it adds to the game’s environments.

BONUS SONG/GAME FACT: The first character I made while hearing this song for the first time was a FOnewearl (basically PSO-speak for a female elf mage) because I thought she was cute. Turns out she was perhaps one of the hardest characters to figure out how to use, so I switched over to the boring default HUmar. The FOnewearl is still cute, though. Especially in PSO2, which I can’t fucking play because it’s all in Japanese and you have to run it through a Japanese proxy and I can’t figure that shit out.

I’ve written about the OutRun BGM before, but this particular piece packs the biggest nostalgic punch for me, maybe because it’s the default track that plays when you start a race. The other two racing tracks on the BGM are just as good, though. There’s something about the Genesis sound chip that gives the best music made with it this classic 90s feel. There’s also plenty of really godawful shitty Genesis songs that are trying to be funk and failing miserably for some reason.

BONUS SONG/GAME FACT: A vocal version of “Magical Sound Shower” was included in the PS4 rhythm game Hatsune Miku: Project DIVA Future Tone sung by Miku herself. SEGA owns both properties, so they presumably didn’t have to pay for the rights. Here’s to saving money on licensing fees.

Final Fantasy VII is not my favorite game ever. It’s not even in my top ten or top twenty. It’s a good game, but it’s not the best FF title, and it’s definitely overrated. But I still listen to FF7’s soundtrack. Uematsu is a damn genius, and watching my older cousin play this game on Christmas 1997 was the first I heard his work. I have a special love for this track, basically the game’s midboss theme. Sounds extremely early 70s proggy, somewhat like Emerson, Lake & Palmer. I’d say that Final Fantasy music even played a part in getting me into 70s prog and fusion in high school. Yeah, I was a pretty popular kid.

I’ve written about this song in particular before, but I’m doing it again. The classic Genesis Sonic games (1, 2, 3&K – Sonic Spinball is a mediocre mess with a bad-to-middling soundtrack) will always hold a special place in my heart.* These are some of the first video games I ever really played in a meaningful way, exploring levels and finding ways to exploit the mechanics. Each game also has fantastic background music. The BGM for Sonic 1 and 2 was written by Masato Nakamura, songwriter for Dreams Come True, a Japanese pop/rock band, and he clearly put a lot of work into projects that might have been otherwise dismissed as music for some dumb kid’s games. “Chemical Plant Zone” is maybe the piece of his that’s most ingrained in my mind.

BONUS SONG/GAME FACT: Michael Jackson did not write this song, in case you didn’t read the above paragraph. Mike is rumored to have written some of the Sonic 3 soundtrack, though.

EXTRA BONUS SONG/GAME FACT: The background to Chemical Plant Zone is used in the intro of Red Letter Media’s parodic “Nerd Crew” Youtube videos. It also makes for a good wallpaper, courtesy of this guy on Reddit: 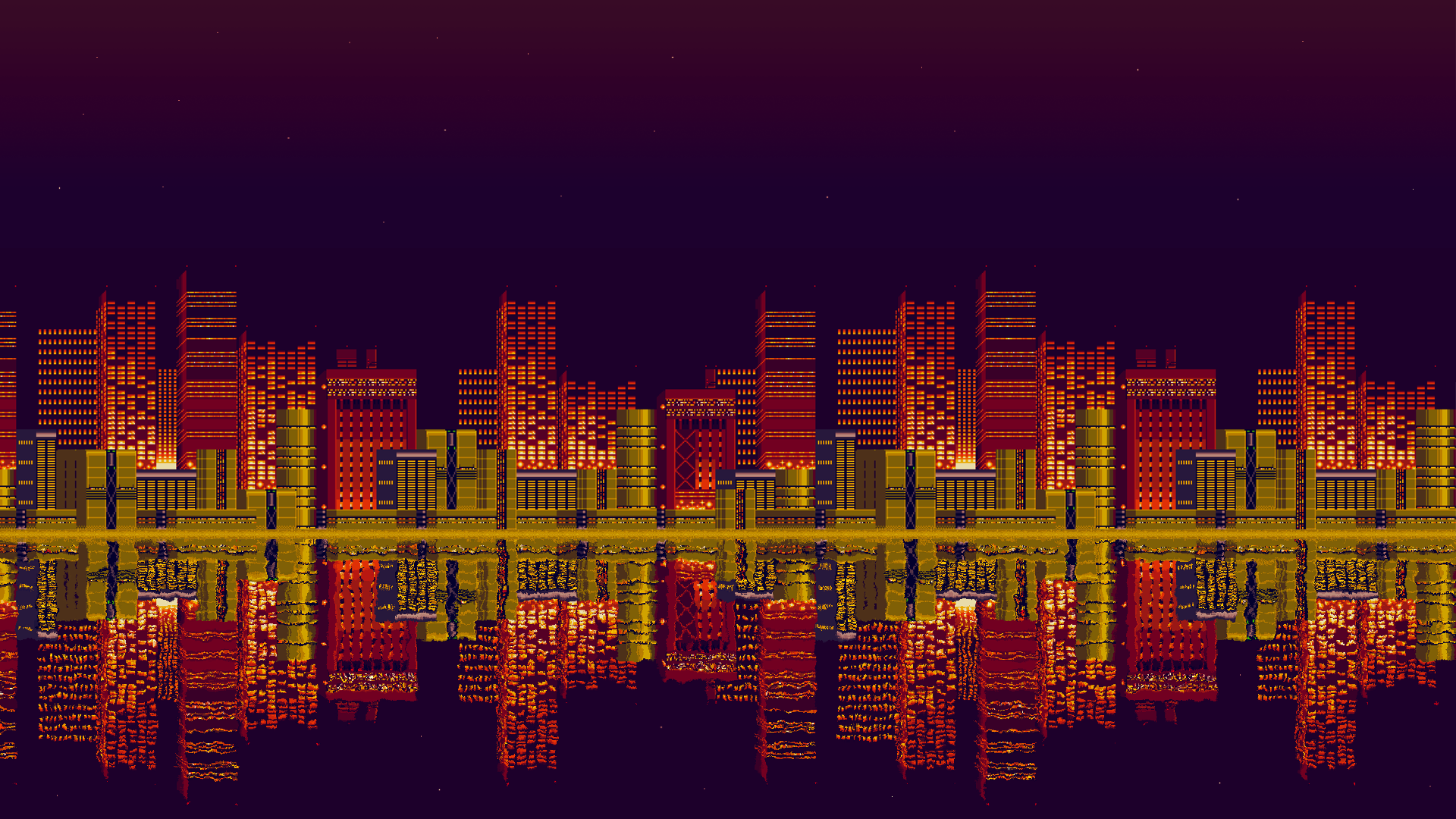 Is this vaporwave? I can’t tell anymore

This last entry is a little different from the rest in that it’s a vocal piece. The limited technology of the late 80s/early 90s consoles wouldn’t have allowed for this kind of track in a game, but the Dreamcast did. This piece is very closely tied to the plot and characters of Grandia II, a god damn classic that I reviewed here – it’s a hymn sung by Elena, one of the game’s central cast. In fact, it’s player character Ryudo’s first introduction to Elena, which turns out to be a real “jaded sarcastic bounty hunter meets bright-eyed innocent girl” kind of situation. The lyrics of “A Deus” are in Portuguese, which from what I understand is mangled pretty badly by the Japanese singer. But she still has a beautiful voice, and it’s still a beautiful song.

Later on in the game, this happens. I don’t remember the context.