Currently watching: The Maid I Hired Recently Is Mysterious

How’s this for some tonal whiplash from yesterday? But this post was coming either way. I’m only watching two currently aired anime series right now, and since I’ve already written about and recommended Call of the Night, I may as well write about the other one.

The Maid I Hired Recently Is Mysterious (or Is Suspicious depending on the title translation you read) is an adaptation of a manga by Wakame Konbu. She’s also the writer and illustrator behind The Great Jahy Will Not Be Defeated! and I liked Jahy-sama a lot, pockmarks and all — it wasn’t perfect, but I enjoyed the characters and the comedy even if it got a bit repetitive with its jokes. But two episodes into Mysterious Maid (as Dopey-kun is calling it, and I’ll follow that standard too) I can say that so far it’s even more repetitive than Jahy-sama. This series so far has used the same joke setup maybe a dozen times in the space of just about 40 minutes. It’s a fine joke, but it might start wearing thin soon if the story doesn’t mix it up.

The setup is pretty simple: Yuuri is the newly orphaned master of his parents’ estate after their tragic deaths in an accident. Despite his youth, Yuuri decides to reject a guardianship and takes control of everything himself. However, the estate is short on money, and without a source of income he can’t retain his family’s small household staff, so he regretfully lets them go and tries to do all the cooking, maintenance, and cleaning on his own.

This doesn’t work out for Yuuri since he has no experience in household upkeep. As he wonders how to handle his situation, a mysterious young woman in a maid outfit enters his mansion and offers her services, saying she’ll work for him just for room and board. Yuuri is naturally wary of this stranger, but without much of an alternative he accepts her offer.

This new maid, Lilith, is an expert at cooking and cleaning and is supremely courteous — the perfect maid. She’s so perfect that, together with her mysterious origins that she refuses to let on about, Yuuri becomes extremely suspicious of her and her intentions, and he confronts her directly time and time again asking her what she’s planning. 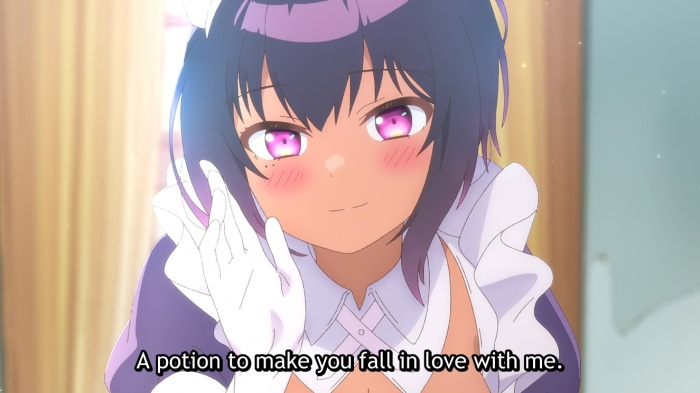 Here’s the routine: Lilith decides to tease Yuuri by jokingly admitting he’s caught her, that she’s a witch or whatever it is he’s accusing her of being and that he’s fallen into her spell. Then Yuuri, completely believing her and not picking up on the joke, announces that this proves why he thinks she’s so perfect, why his heart races when he sees her, and why he can’t even sleep at night because he’s thinking about her.

And the tables are turned!

Then Lilith, realizing Yuuri is confessing his feelings for her without him really understanding the gravity of what he’s saying, gets flustered and embarrassed and runs away, leaving the poor kid convinced that she really is some kind of sorcerer.

That’s the basic joke. Again, it’s fine, a nice cute exchange between these two characters, but that’s really all that’s happened so far. The second episode does open things up between them a bit, with Lilith helping Yuuri get over his fear of cats (which I’ve never heard of, but sure, cats can be tricky to deal with) but so far the series feels pretty one-note. Then again, it is only two episodes in — Mysterious Maid got an unusually late start this season, and it’s skipping a week already, so we’ll have to wait another week or so as of this writing for the third. That old “three-episode rule” might be a good one to follow in this case if you’re not sure about whether to keep up with it, since it also seems from the title that the third episode will introduce a new character to the mix.

I plan to keep watching Mysterious Maid myself, at least for a while. I like the two leads and especially Yuuri’s reckless boldness (not that he seems to even realize it himself.) And Lilith, well — there’s plenty of reason to like her, though her origins are still mysterious or even possibly suspicious.

Lilith alone in her room in the post-end credits of the second episode. Yeah, it just went right there

Yes, Lilith herself is clearly a huge part of the show’s intended appeal. I’m not that surprised considering it’s a series all about a cute maid and all that but we didn’t really get this kind of material in Jahy-sama. Even if Lilith does look a lot like adult Jahy, the feel to her and to this series is very different.

There’s also the question some people have raised about an age gap between her and Yuuri, just like with Call of the Night, and with both being romance-themed stories too. However, we don’t really know the size of the gap — maybe Yuuri just hasn’t hit his growth spurt yet. And anyway, it’s not like a boy crushing on a young woman like Lilith is unusual if nothing actually romantic comes of it. That sort of thing happened to me once, though I never had the guts (or obliviousness) to come right out and tell her I wanted to marry her. But who knows where Mysterious Maid is going? Aside from Wakame Konbu, and maybe even she doesn’t know herself considering how long some of these series tend to run.

Yuuri confronting Lilith for the nth time, but it looks like there’s a little more trust between them now.

There’s my take so far on The Maid I Hired Recently Is Mysterious. It’s about as substantial as cotton candy so far, but as long as it mixes its routines up, I may just stick with it as one of my escapist stress-relief series this season.

4 thoughts on “Currently watching: The Maid I Hired Recently Is Mysterious”