After several months, I’m back with the anime shorts. I haven’t had a great track record with the series on the shorter side, but I always try to keep an open mind about anything new. Luckily I didn’t have to open it too much this time — I was already all too familiar with the source material this series is based on.

I might have stopped playing Azur Lane a while ago, but I still like its bizarre shipgirl concept and have some favorite characters from the game that I was happy to see in this short series. Slow Ahead is formatted into 12 roughly 8-minute episodes, so about a third of the usual episode length — not an episode length I’ve ever seen before. I’m not even too sure about how an eight-minute time slot would fit into scheduling on Japanese TV, since I’ve never had a chance to watch it anyway — all my watching has always been done online. 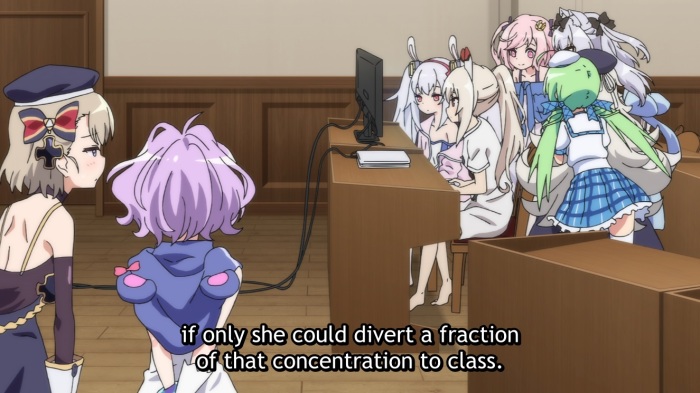 Slow Ahead! follows four characters based on the real-world WWII-era destroyers KMS Z34 (aka Niimi as she’s usually called by everyone else), HMS Javelin, USS Laffey, and IJN Ayanami. In the game and this anime, they’re not actual ships but rather girls who strap on rigging with guns, torpedoes, and other weapons and defenses when they go out to battle. But there’s no battle in Slow Ahead! — it’s just a cute slice-of-life show about these girls attending a military academy with their colleagues.

Some of their colleagues are maids, but the maids are also ships like the British cruiser Belfast and her clone here. Man I don’t know, you just have to accept this stuff if you’re going to watch it

That’s the whole story in Slow Ahead! There’s no real plot, just those slice-of-life antics with a few comedy bits and some fanservice. The fanservice makes sense this time too, since the game itself is shoved full of it — a few of those costumes you can buy with real money (God help you if you fall into that hole) make an appearance in the show. 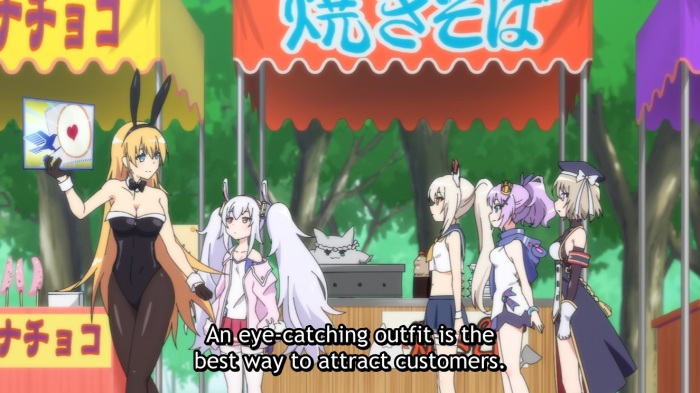 Like this one, thanks to the USS North Carolina’s strange obsession with bunnygirl outfits. But she’s not wrong — putting a hot lady in a bunnygirl outfit outside your stall is a great way to attract customers. Or a guy too, why not (but there are no guys in Azur Lane aside from probably the Commander/player character, which is extremely purposeful.)

Speaking of the Commander, he (or she if you like) is designed purely to be the self-inserted player character. That’s the whole point of the Commander — in the game itself, these ladies will all talk to you directly, addressing you as Shikikan or Shikikan-sama, or maybe something casual or actually insulting or disrespectful depending on their personalities. It’s a gacha game driven by in-game purchases, so naturally the makers are going to pile on these immersive aspects (as much as a mobile game about anime waifus can be immersive at least.)

I like how the Commander is handled in Slow Ahead! — mentioned a lot, since some of these girls are seriously going after his heart/crushing on him as you’d expect — but never showing up. It’s the perfect solution, since it gets about as close to that self-insertion the game provides as the anime can probably get. You might think that’s weird or a bit sad, but hey, if that’s what you’re going for may as well do it right. There’s another short series I’ve watched that attempts a POV sort of self-insert silent main character and it’s amazingly awkward. Maybe I’ll write about that one sometime soon.

Azur Lane: Slow Ahead! is a nice series to check out if you need a break, especially if you’ve played the game. You will probably get a lot more out of it if you’re already familiar with these characters (personal opinion: Laffey is best girl aside from Yamashiro of course — okay, best destroyer) but they’re all fun to watch, so I wouldn’t say it’s necessary to play the game to enjoy Slow Ahead! I can’t in good conscience recommend that anyone play a gacha game anyway.

And if you’re going to watch one Azur Lane-related anime, it seems like it should be this one, since this short series is rated far more highly across every platform than the main full-length anime adaptation, which I’ve heard was a mess. I can’t speak to that myself, though. Maybe I’ll watch the first episode if I have it available just to see for myself.