This isn’t going to become a regular feature. It’s more of a situational thing. I just happen to be stuck in the middle of some very long games right now, and so I thought I’d cover where I currently am in them along with my thoughts so far. All on the PS4, because yes I’m a console peasant with a shit PC that can only run VNs and then just barely.

These also aren’t the only games I’m playing — I have two or three shorter ones lined up that I’ll very likely get through first, but I’ll save those for their own reviews. For now, let’s start with:

I really like this game so far. But I’m still only on chapter 5, and here I’m going to talk about why. 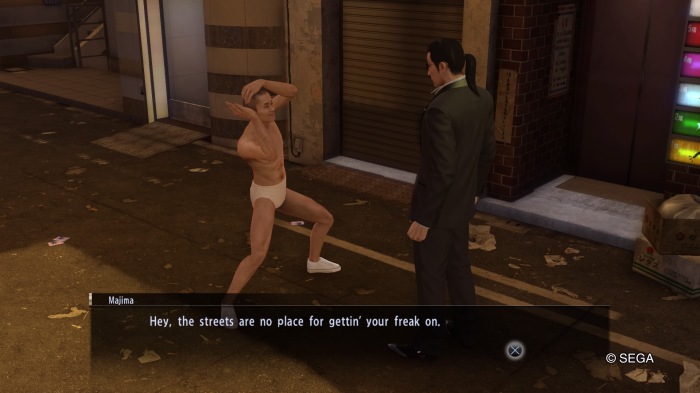 And then there are the side characters you run into around town who don’t necessarily connect to that main plot at all. The lady-crazy Mr. Libido up there is just one of the more out-there characters you can meet around the streets of Tokyo and Osaka. The two main characters Kazuma Kiryu and Goro Majima have their own particular ways of approaching these people, and they’re both entertaining — there’s a lot of “why the hell am I going along with this…” sort of talk from them, especially from the serious Kiryu, but in the end they are actually helpful guys despite being dangerous (ex) Yakuza types. 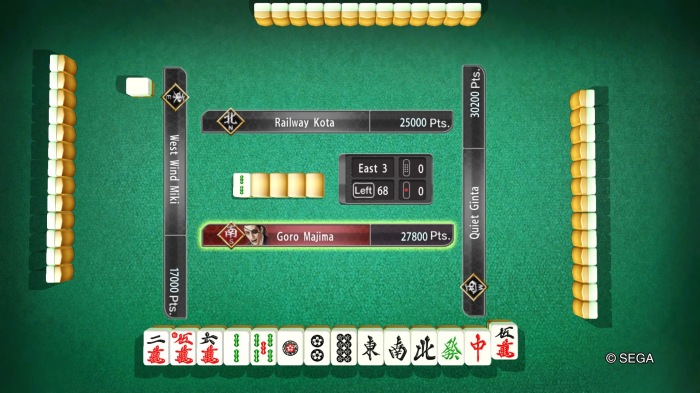 Finally, the minigames. I spent a lot of time in the Tokyo and Osaka mahjong parlors losing my money to these assholes. Of course, it’s not such a big deal to lose when you can step outside, get called out by a group of thugs, and then beat a few hundred thousand yen out of them to immediately recoup your losses. It’s still frustrating to get beaten at the mahjong table in the last round when you’re in the lead, though. One day I’ll get a daisangen and then quit playing this shit.

For now, though, I need to make progress in the main plot. I’ve just shifted back to Kiryu’s perspective, and he has plenty of work to do in his new position as an agent for a shady real estate developer while he continues his hunt for clues about the murder he was framed for. I’m sure some beatings will be in order soon enough.

Atelier Ryza: Ever Darkness and the Secret Hideout

Continuing my trek into the long ass Atelier series, I’m now in the middle of Atelier Ryza. And I’m really liking it so far. This is the newest iteration of the series, which has gone through a lot of changes over the last 12 years since it moved into its “modern era” (at least as far as I can tell, this is how fans talk about the series) with Atelier Rorona. 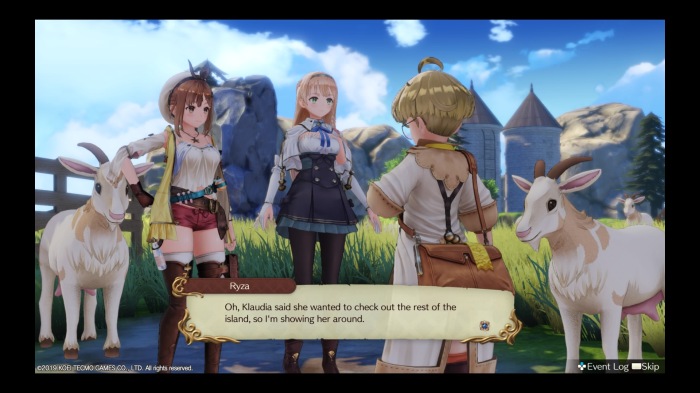 Hanging around the farmland near Ryza’s sleepy hometown of Rasenboden. Ryza wants to go out adventuring, but all I want to do is retire and feed the goats. I really am getting old.

Ryza features a completely new lineup of characters in a new universe distinct from all the previous ones and is quite a bit more slice-of-life and relaxed than the Atelier Dusk trilogy I reviewed earlier this year. It does have a plot about saving your hometown from a long-dormant evil lurking around, but it’s all more or less driven by the protagonist Reisalin Stout, or simply Ryza, wanting to get the hell away from her parents’ farm and her island hometown to explore new lands. She brings/drags along her friends, the warrior Lent and the nerdy mage Tao, and along the way she runs into more future friends including an alchemist who reveals the secrets of his craft to her, after which Ryza commits to learning alchemy herself.

But that’s not the only difference from the Dusk series. The old traditional turn-based combat system has also been replaced with one that combines elements of turn-based and real-time battle. As a consequence, battles in Ryza are a lot faster than in previous games, and with a stronger emphasis on identifying and exploiting enemy weaknesses. If you haven’t synthesized the right attack item for a particular boss, you’ll likely get wiped out in under a minute, but you can just as easily tip the scales in your direction by spending time in the atelier. I don’t even know what this does.

Speaking of synthesis, Ryza would not be a proper Atelier game without a heavy emphasis on crafting items, weapons, and armor with alchemy using ingredients you can find in the field. The new alchemy system is again very different from the previous ones, but it’s pretty intuitive. I’ll go into far greater, and probably very boring, detail when I actually review this game.

And hopefully that review isn’t too far off, because I’m making good progress in Ryza. Not sure how far I am in the story, but my adventurer level is in the high 30s and my alchemist level is in the high 40s, so I’m at least pretty far along with the character development in that sense. That said, I’m currently having my ass beat by a dragon boss so I’ll have to go back to the drawing board until I can figure that fight out.

From now on simply NieR Replicant, though that long version number does set this game apart from the original PS3 Replicant. Then again, we never got the original Replicant here in the States — instead we got NieR Gestalt, simply titled NieR (or Nier as it was written on the NA cover — still not sure about the deal with that capital R but I guess Yoko Taro has his reasons for it.)

Look, if Devola asks me this question, the answer is yes.

Anyway, I’m a bit into the second part of Replicant, and it lives up to its strong reputation so far. The soundtrack is amazing of course (I do prefer the original “Gods Bound by Rules”, but the new one is good as well) and the gameplay is fun, with plenty of special moves to learn and weapons to pick up. In terms of the mechanics, it’s not very different from its semi-sequel NieR:Automata, so at least the style didn’t take much getting used to.

One aspect of NieR Replicant I especially like is the character interaction. Automata had some great moments in this sense, especially in the friendly but tense relationship between 2B and 9S, but Replicant does even better. The setup of the story is pretty basic: you’re a young man (canonically named Nier, but you can pick any name for yourself) determined to save your deathly ill little sister Yonah. But Yonah isn’t just “sick little sister” — she has a lot more character to her and is determined to help out Nier despite his insistence that she simply rest and try to feel better.

Kainé giving Weiss a piece of her mind.

The banter between Nier and the powerful magical talking book Grimoire Weiss, who quickly becomes your ally, is also great. This ancient tome is tired of all the bullshit and just wants people to give him the respect he’s owed. He doesn’t get all that much, though, and especially not from Kainé, now one of my favorite supporting game characters.

Finally, that injury I got a while back has finally healed, so I can actually play these action games again without awkwardly not using my left thumb to manipulate the controller. Took long enough. Apparently I don’t heal nearly as quickly as I used to; probably yet another effect of getting older. What a fucking life this is.

But I’m not quite done with these preview posts yet. Next up in just a few days will be a similar one covering two currently airing anime series I’m watching. They’ll be running for quite a while, all the way through the fall season, so there’s still plenty of time to get on board and get current with them if they appeal to you. Until then.