Well look, it’s December already and cold as fuck suddenly. I like winter better than summer, but that still doesn’t mean I like below freezing temperatures. I’m not that much of a masochist.

But what better time than to listen to some nice unplugged music, maybe around a fire with coffee spiked with at least 1 part whiskey out of 4? No, not even Irish cream, I mean whiskey. This month I’ve picked a few albums that I think fit that setting, along with the usual great, insightful posts from around the community here. 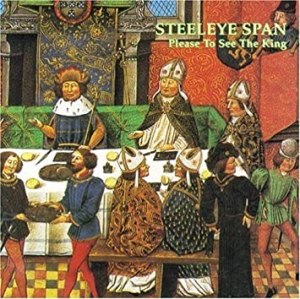 Last month, I started my post by recommending Steely Dan, and this month I’m recommending Steeleye Span. The names are remarkably similar, but these guys have absolutely no resemblance otherwise, because Steeleye Span was an English band playing originals and adaptations of old English/Scottish/Irish/Welsh/etc. folk songs.

Please to See the King mainly features singing and a bunch of acoustic instruments (but no drums, weirdly enough — even though “Female Drummer” is a song on this album.) Most of the songs are pretty catchy and memorable, with plenty of energy behind them. And they seem to deal with common problems from the old days, such as being a young woman disguising yourself as a man so you can join the military (“Female Drummer”), getting knocked up by a knight who runs away from his fatherly duties (“Cold, Haily, Windy Night”), and meeting the Devil (“The False Knight On the Road”.) And there’s even a nice innocent-sounding song about a bird that’s actually about something else entirely (“The Lark in the Morning”.)

I really don’t know anything about the folk music of Britain and Ireland — all I’m familiar with are these songs and Thin Lizzy’s version of “Whiskey in the Jar”, so I’m a total novice in this area. But I know I like this album. It’s good music, that’s all. A few good songs to drink and sing along to as well if that’s your thing. 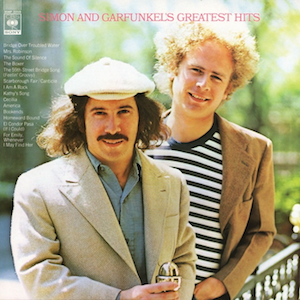 Highlights: I Am A Rock, Bridge Over Troubled Water, Scarborough Fair, and most of the rest of it

Does recommending a greatest hits album fuck up all my credibility and kick me out of the serious music critic club? I guess it probably does, but hey I don’t care, because I was never in it and wouldn’t want to be anyway. And Greatest Hits is the only Simon & Garfunkel album I ever owned, and I’ve owned it for a very long time now, so I’m putting it up here. If you don’t know them, Paul Simon and Art Garfunkel were an American folk-rock duo who put out some great music back in the late 60s/early 70s. Simon was the music guy and Garfunkel the vocals guy, but they both sang in a lot of their songs and captured a sound that nobody else could imitate.

The songs are mostly really good as well, with some absolute classics you’ve probably heard like “Bridge Over Troubled Water”, “Scarborough Fair” (the “parsley sage rosemary and thyme” one), “Mrs. Robinson”, and “Sound of Silence”. “I Am A Rock” is a great one too — I can really connect to the protagonist of that song, what a surprise. A couple of the songs here don’t do anything for me, but I like most of them, and I think these guys are well worth checking out.

I do have to single out one song with a terrible message, though: Cecilia. Your girlfriend cheats on you and you beg her to come home and then rejoice when she does? Personally, I’d change the locks and tell her to go to hell — and I’d expect to receive exactly the same treatment if I did that to her. You’re just asking for trouble otherwise, aren’t you? Maybe I’m the weird one in this case, I don’t know. I did mention I’m not a fan of NTR recently, so it’s no wonder I don’t like this song. (edit: I just found the other interpretation of “Cecilia” and I like that one a lot better. I had no idea about it until now, but then I wasn’t raised Catholic — if you were, maybe it would have occurred naturally to you. Okay, this is enough about one song, on to the next album.)

Okay, so maybe this one doesn’t fit the theme so much. Really, I’m just posting Das Lied von der Erde (or The Song of the Earth) here because I’m tired of some people dumping on late 19th/early 20th century Austrian composer Gustav Mahler.

Well fuck that. Just listen to this work of his, apparently produced at a depressive period of his life (which really comes through in the lyrics.) The song itself is supposed to be based on some old Chinese poetry that was translated into German and adapted to be set to Mahler’s orchestral compositions. The various parts hits all kinds of tones, starting with “The Drinking Song of the Earth’s Sorrow” which sure sounds like a depressed drunk dude yelling about the sorrows of the Earth, and then moves on to quieter, more contemplative sections, and then back to the sweeping material.

The performances in the modern recordings we have are usually great and the whole thing feels like a ride, even if I still don’t have much of an idea about what the point of it is. I guess to lament about how life sucks and we’ll eventually die anyway? If that’s the message, then I can completely understand it, but as with Magma’s Mekanïk Destruktïẁ Kommandöh, there’s probably something deeper going on here that I’m not getting. Anyway, this is one work to use if you want to show someone that classical music isn’t all stodgy, boring stuff. Maybe it still won’t work, but that is a misconception I’d like to blow up completely.

Now on to the featured posts:

Revisiting my view on Anime Gatekeeping (I drink and watch anime) — Irina again examines the issue of gatekeeping in the anime fandom(s). It’s a complicated problem, and one that I have my own opinions about (more on the game side, but some of the problems there are similar.) Whether you agree with her approach, Irina takes on the issue with a lot of care and insight, so be sure to check it out.

#Controversed: Don’t Attack Actors and Voice Actors, Be a Force of Positivity (Mechanical Anime Reviews) — Apparently some people have attacked voice actors online because they don’t like certain characters they voice, which is completely insane. Scott addresses this problem and calls for civility and positivity in this post.

Autumn Adventures in Kyoto (Part 1) (Resurface to Reality) — A tour of some beautiful parts of Kyoto in the autumn from browsercrasher. Again, I wish I were there. And it’s more than just the virus keeping me from traveling. But maybe one day. At least great travel posts like these can let me go there in my mind.

Why I love autumn (A Richard Wood Text Adventure) — Continuing the theme, Wooderon expresses his love for autumn. It’s my favorite season as well, but sadly it’s finished where I live because we’re below freezing here now. At least we actually had an autumn this year — it’s not a given where I live that it will last more than one week from blazing hot to freezing cold. I hate this place.

Watch Out, They Move, They Diss You Loud! The Persona 3 Retrospective, Part 6(c)-Characters: Akihiko and Mitsuru (Lost to the Aether) — Aether continues his ongoing Persona 3 analysis series with this look at two of my favorite characters from that game, Akihiko and Mitsuru. If you only know Akihiko from his appearances in the Persona Q and Persona 4 Arena, read Aether’s analysis to discover how much deeper of a character he is than the cardboard cutouts those games present.

I Love Meta-Gaming (in Hades) (Frostilyte Writes) — Frostilyte uses Hades and Monster Hunter World to illustrate how meta-gaming can add a lot of value to your gaming experience. It’s the kind of thing you might not actively think about too much, but it makes a difference!

Knives Out (Rian Johnson, 2019) (Extra Life) — Is the newest Rian Johnson film better than The Last Jedi? Red Metal gives his answer to that question in this thorough, indepth review of Knives Out.

The Anime Encyclopedia – A review (Reasons to anime) — If you were wondering whether The Anime Encyclopedia is worth buying, read Casper’s review. Really, any reference book that craps on anything Disgaea-related without even bothering to know who the characters are is fit only for $1 bargain bin hell, or better still a garbage dump.

Atelier Meruru: The Apprentice of Arland – Meruru, Warrior Princess (MoeGamer) — And finally, if my review of Atelier Meruru DX didn’t convince you to buy that game right away, check out Pete’s feature on it. Anyone who thinks video games are lacking in strong but realistically flawed female characters needs to play an Atelier game, because the series is full of them, and Meruru is one such protagonist. (Now I just need to find the time to play Atelier Totori…)

And now for the final month of this cursed year. I have a few more post ideas to work on, and I’d like to finish 13 Sentinels: Aegis Rim before the year is up — but no guarantees, since it seems like a very long game with a lot of twists and turns. It’s great so far, though. I also have a few VNs I’m still working through, including a certain newly released kinetic novel about catgirls working in a bakery. What could I possibly be talking about? Maybe you’ll find out soon. Until then!