A review of Muse Dash (PC)

Sure, I like playing my hardcore simulation games and JRPGs and all that, but I also like to have a few casual games to mix things up. Especially these days when I have so much work to get through, being able to pick up a game for half an hour or even a few minutes can be useful. So I’ve been getting a lot of use out of Muse Dash, a rhythm game out for PC, Switch, and mobile platforms. I say casual, but in some sense, Muse Dash is extra-casual. Unlike other rhythm games I’ve covered here like Hatsune Miku: Project DIVA Future Tone and the Persona dancing titles that feature four tracks to keep up with corresponding to the four buttons on the PS4 controller, Muse Dash only has two. There’s no story to the game either, at least not one I could find.

But that’s fine. This was just the kind of game I needed for these bullshit times we currently live in. It’s colorful and fun, and you don’t really have to think too much about it.

Muse Dash in its base form features a few dozen tracks to play through. The player can pick one of the three muses Rin, Buro, or Marija to play through these rhythm-based courses with, beating up enemies and dodging obstacles to the beat of the song. Each course includes a “boss” sort of enemy who will shoot more shit at your muse that she has to dodge/hit to maintain her combo. Missing an enemy breaks that combo, and getting hit by an obstacle or enemy deals damage and drains her health bar. And naturally if that bar gets to 0 HP, the stage is failed.

So the basic gameplay is pretty simple, intuitive enough to pick up and start playing right away. One of the nice things about Muse Dash is that it offers a wide variety of difficulty levels rated by number. Even if you’re someone who’s not very good at rhythm games (for example: me) there are plenty of songs from 1 to 4 in easy and even hard mode that aren’t too much trouble to master. 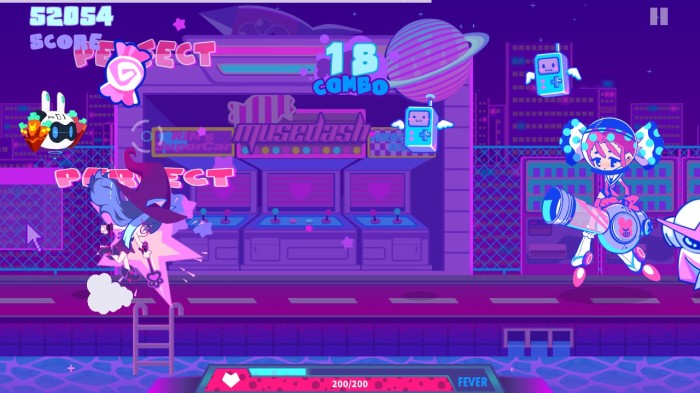 Don’t get hit by her peppermint candy cannon, it hurts

If you greatly improve your skills or you have naturally amazing reflexes, there are also higher-rated hard and master mode levels that provide a nice challenge. However, Muse Dash is also considerate enough to let the player level up quickly by playing through courses no matter what difficulty they’re set to, meaning even a crap player like me can unlock most of the content in the game.

And there is quite a lot of content that’s initially unavailable. These include most of the game’s songs, useful helper characters called Elfins who can be paired with your muse, and a variety of costumes for Rin, Buro, and Marija that change their HP and abilities. Most of these costumes took hours upon hours of grinding through songs to unlock, but most of them are worth getting for the benefits they provide. Anyway, those hours didn’t feel like grinding; they just passed naturally as I played the game.

She’s not the best character to use, but my favorite one is still catgirl witch mode Marija.

The base version of Muse Dash sells for only three dollars, and the few dozen songs it includes offer some nice variety in speed and style. However, there’s a heavy emphasis on sweet-sounding poppy material. The game also features some harder-edged rock and electronic tracks, some jazzy stuff, and a few classical/orchestral-sounding pieces. But between all the J-pop/cute anime theme-style music (a lot of it seems to be Chinese as well, but it’s also done in that style) and the game’s cute visuals, Muse Dash might be too extra-sugary for some players. At least it won’t affect your blood glucose level, but you might feel the same way playing Muse Dash as you would eating a bunch of cupcakes or those horrible glazed Krispy Kreme doughnuts. I’m not a fan of every track I’ve played so far, but I enjoy most of the music, especially the more relaxed chilled-out stuff.

However, that’s just the base game. Muse Dash also comes with a DLC package that sells for $30 and piles several dozen more songs and courses onto the tracklist. I know I’ve complained about overpriced DLC already, but this time the price feels more justified, especially since it acts as a sort of “season pass” that applies to future DLC. It also looks like the makers are actively releasing new songs and characters. It’s entirely possible to get a lot of play out of the basic three-dollar version, enough that you might be satisfied with that alone — the $30 version seems made for players who really get into the game.

How the hell are you standing on top of a limo and shooting missiles out the back? This is definitely a traffic violation!

The only problem I’ve had with Muse Dash so far is some occasional slowdown and stuttering in the tracks. When this happens, the song and course fall out of sync and then you may as well quit and restart, because your run will probably be completely screwed up if you can’t rely on the beat to guide you. This has only happened to me a few times when I had too much other crap running in the background, so it’s likely just an issue on my end.

So I don’t have much to say about Muse Dash, but in this case, that’s not a bad thing. I’ve been playing the Steam version off and on for a while now, and it’s been a great break from my work schedule, especially considering how easy it is to break into five- and ten-minute runs. Like pretty much every other game out there, it’s not for everyone, but it’s certainly for me. Even if it is pandering a bit with those costumes. Why aren’t there more catgirl witch characters around anyway? Someone needs to work on this deficiency as soon as possible.