The worst season of the year is finally here, which is nice, because it means we can now look forward to fall in a few months. To commemorate this summer, I’ve decided to start a special series of posts. I have a few short games that have been in my Steam backlog for years now, and a few others that I very recently bought for barely anything in a huge bundle on itch.io, and a couple of others still on a hard drive that I don’t know the source of.

I wanted to get through these while I had the time (i.e. while most of my country continues taking work-from-home quarantine measures) but I also thought I’d rope these reviews off into a special series to excuse how short some of them will be. If I end up having enough to say about one of these games that it will take more than a few minutes to read, I’ll set it aside for the full review treatment. And if you like my usual long-winded style, don’t worry, because I’ll be posting the usual overlong pieces this summer as well. Those full reviews and deep reads are still on their way.

On to the first game down: Qora. 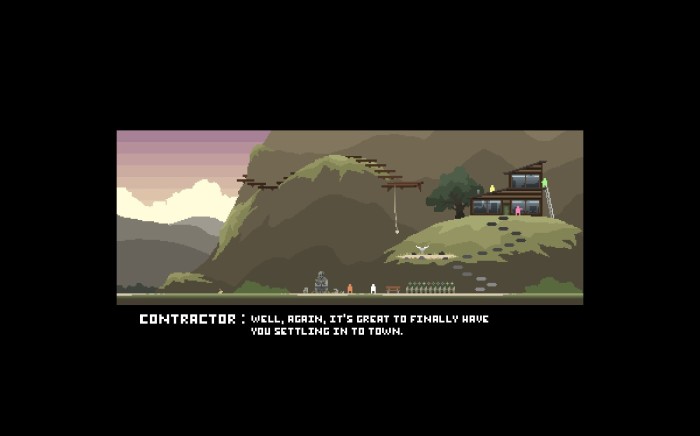 This was released way back in 2014, and I’m positive that it was one of those games I bought during a big Steam sale. I know I’m not the only one who buys games just because they’re cut in price 80 or 90% and then forgets about them in his Steam library for years on end, and that was the fate of the copy of Qora I bought. Despite how it looks, this isn’t some kind of platformer or minimalistic RPG. It’s instead an extremely linear exploration game without much of any gameplay. In other words a walking simulator, only in 2D instead of the 3D environments such games are usually set in (see Gone Home, Dear Esther.)

So it’s maybe not a big surprise that I didn’t like Qora. The whole experience lasts maybe an hour or two and consists of the protagonist, a nameless, featureless, characterless figure made of several pixels, going on a mystic walking quest to discover the ancient secrets of the land he or she just moved into after receiving a message from one of the local gods along with the ability to see the dead souls of the former inhabitants of the land.

That might make the game sound interesting to you, but the concept doesn’t translate into much of anything in practice. Qora has some nice backgrounds and settings that feel atmospheric and probably would have gone very well with a game featuring an interesting main character doing something that they had an actual motivation to do, but that isn’t the case here. Your only job is to get your pixel figure all the way to the right across dozens of screens by using the tools you get from talking to all your new neighbors in town. Including a set of incense sticks to burn at each shrine you come across, otherwise you’ll probably get a bad ending because you pissed off the gods, but I can’t be bothered to find out.

There are a few amusing parts, like the ancient monstrosities you run into during your journey that are totally harmless and even friendly and gladly get out of your way so you can continue. But by the end of the game, when the big secret was revealed, I was just tired of it and didn’t give a shit. There’s also a lot of that sort of wacky humor at the very end that I don’t care for. Call me a hypocrite if you want — I like Wes Anderson movies, but that kind of “quirky” stuff has to be done just right, and this didn’t work at all for me. Also, after an hour plus of moving along at a slow walk to reveal a secret I didn’t care about and had no investment in, my patience was already worn pretty thin.

So I don’t recommend Qora, and certainly not at its sticker price of ten dollars. It reminded me a lot of a game I played years ago also featuring some interesting backgrounds and atmosphere and not much else called Mandagon. I had much nicer things to say about that game, but it was also free and only took half an hour to get through, so even if it was nothing much, that wasn’t such a big deal (and it also had some sort of Buddhist theme, so if you’re a Buddhist maybe you’ll get a lot more out of it than I did?) I recommend you play Mandagon instead of Qora if you’re looking for this kind of experience, because then you won’t have to complain too much if you thought it was boring.