I don’t know if I’ve seen an upcoming release as controversial as The Last of Us Part II in a while. It’s received almost entirely excellent reviews from the professional game press, who are declaring it a triumph of storytelling and a deep, affecting experience. Meanwhile, consumer opinion seems to be split — people are somehow already bitterly arguing about the game’s quality even though the damn thing isn’t out for another week. Granted, we have the first game to compare it to, but it still seems hasty to call the sequel a piece of shit on that basis, or even to call it a masterpiece based merely on the word of a bunch of professional reviewers.

I won’t be playing TLOU2. Not because I hate Naughty Dog or anything; I don’t care about them one way or the other, and I don’t really have it out for any game developer at all for that matter. Based on what I’ve seen, the game just doesn’t interest me. However, there is a question raised by all the back and forth fighting over TLOU2 that I do find interesting, and one that I was already thinking about before this controversy blew up — should a good game be fun to play? The reviews of this game I’ve read pretty consistently describe a miserable experience fighting through and hiding from both undead and living human threats and requiring the player to make potentially morally uncomfortable decisions. Yet those reviews also declare TLOU2 a triumph, with one guy comparing it to Schindler’s List and causing yet another uproar for it. 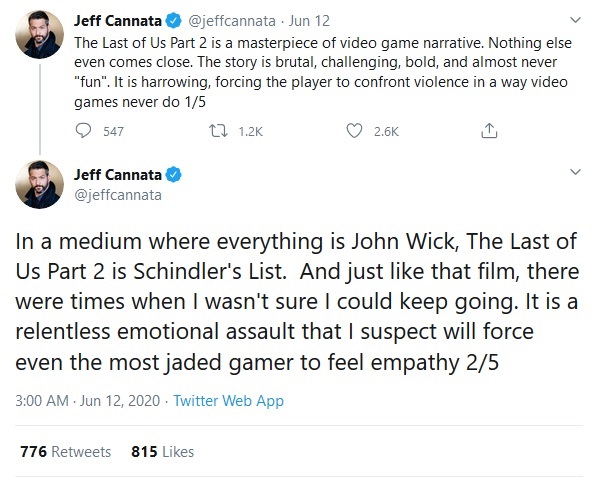 It goes on in this fashion

Setting aside Mr. Cannata’s weirdly narrow definition of “everything” being John Wick when it comes to games (I’m currently playing a game about a princess who makes items with alchemy, beats up dragons, and eats pie with her friends and it’s not much like John Wick1) I find his view interesting. The game wasn’t “fun” at all, but it was still an amazing experience. This isn’t a new take on video games, either. See this 2015 piece from Vice titled “The Value of Video Games That Aren’t ‘Fun'” that expresses a very similar view. The idea seems to be that a work of art that puts the player through hell as Cannata writes of TLOU2 can be inspiring and profound, and that such a game’s lack of fun elements can even work in its favor in that sense.

I don’t want to completely dismiss this idea. If video games are an artistic medium, and I think they are, then they can certainly affect the player emotionally and challenge their views of the world just as some of the great novels, plays, films, and music out there have done. To pull an example straight out of that Vice article, 1984 was a very depressing novel to read, but I thought it also totally achieved its goals in getting the reader to really care about a few people living in this unbelievably oppressive society. If a novel like that weren’t kind of hard to read, it would defeat the purpose. The same goes for Schindler’s List for that matter — a film about trying to save people during the Holocaust can’t really be called “fun” either, but it is profound, emotionally affecting, and very worth watching. So then why can’t a game also be depressing and hard to play, therefore making it way more profound and effective in challenging the player’s views of the world?

I see a few problems with the views expressed by these critics and writers. One is that they seem to be ignoring interactivity, an element of video games that isn’t shared by older media. When you sit down to watch a movie or read a book, you don’t expect to take an active part in it; you’re just taking in a story. With a game, however, unless it’s a visual novel or something similar [edit: and one without much player input either, like a kinetic novel] there’s an expectation that you’re going to get to interact and have some gameplay elements. So if you’re making a game an absolute misery to get through, you’re not just asking for the audience to passively sit and watch or read — you’re asking them to take an active part in struggling through a difficult mess for the payoff. That’s quite a bit more to ask.

A game can’t put a player in a rough situation and also be fun, it’s never been done before

Even that can make for a good game when done right, however. The Silent Hill games gave you pretty much normal-strength humans to control while fighting through and often hiding from vicious monsters. Plowing through enemies would be a lot easier and maybe more fun in some sense, but that’s not the sort of experience those games were meant to deliver. And despite all that, the Silent Hill series is widely beloved (up through Silent Hill 3 at least.) Even though they didn’t quite empower their player characters, putting them in extremely dangerous situations with scant protection and pretty average fighting ability, they also let you work out alternative ways to get through those situations when brute force was not going to work so well. A challenge like that can be fun in itself, and I’d argue the good Silent Hill games achieved that balance.

However, there’s another problem stacked on top of the first. If a game is going to put the player through any kind of hell at all, it has to deliver a payoff at the end that’s worth the effort spent to get there. Otherwise, it’s probably going to leave a rightly frustrated and annoyed player. If a game has something truly profound to say about humanity or life that’s worth the effort it takes to make it through its challenges, then it certainly could be worth playing, just as I think a book like 1984 is worth reading or a film like Schindler’s List is worth watching. If the payoff ends up being some trite message that most every person on Earth over the age of five already knows, however, then by contrast it won’t be worth playing unless the gameplay’s fun on some level. At that point, I’m far better off instead playing a game that’s fun and has no message at all.

I’m pretty sure I wasn’t responsible for whatever this is.

Finally, there’s the problem of player agency. If a game’s going to take me to task for making the player character do something it perceives as wrong, it had damn well better give me options. Even though it doesn’t tie into its plot, I remember the old Thief games doing a good job of this: on higher difficulties the games usually forbade you from killing enemies in favor of knocking them out with your blackjack or with sleeping gas devices, the idea being that the protagonist Garrett is a professional thief, not a murderer. This was more difficult but always possible to achieve, and it made a no-kill run of a mission very satisfying to pull off on the harder levels. I think this element of player choice leading to a rewarding feeling was also a big part of why the indie RPG Undertale did so well.

However, a game that essentially forces the player to do something it deems bad only to chew them out for it afterward causes a disconnect between game and player. A game can’t simply make the protagonist do whatever it wants in the same way and with the same consequences as a novel, film, or other non-interactive work can. If I’m being put on rails and shoved down a track, you can’t make me feel bad for whatever happens as a result.2

Again, I don’t have any particular feelings about The Last of Us or Naughty Dog; I can’t and don’t plan on making any judgment of the game, and it’s no skin off my back if it ends up doing well or poorly. And after all, the market has room for all kinds of games. Some of those kinds I don’t especially care for, but why should that bother me? The same is true of every artistic medium on Earth. I just find some of the views expressed by professional reviewers who are praising it to be not very well-considered. By suggesting that this game is both profound and emotionally affecting and “not fun” and really emphasizing that “not fun” aspect, there seems to be an implication that a fun game can’t also be profound and emotionally affecting in the same way, and that doesn’t make a god damn bit of sense to me. 𒀭

1 It’s Atelier Meruru DX for the PS4, and now I’ve totally ruined the surprise when I post my review of it soon.

2 I recently bought a massive bundle of over a thousand games on itch.io. The deal is still on for a couple of days so check it out; the $5 minimum goes to the NAACP and a bunch of bail funds, which I think are pretty damn good causes. Anyway, one of the games included is 2064: Read Only Memories, a game that’s been sharply criticized for doing just this sort of obnoxious “railroad the player and then try to make them feel bad” thing. I might just have to see that for myself since I own it now. I did find the demo pretty irritating, but I shouldn’t judge it based on that alone.

However, the bundle also contains Dreaming Sarah and OneShot last I checked, and I know for a fact that those are both well worth playing.

20 thoughts on “Does fun belong in “serious” video games?”