Yet another Valentine’s Day post (or, four game characters I might want to date if they were real but probably shouldn’t)

I have to admit that there are a few games I’ve played featuring characters who I thought were pretty attractive, in that “if only she were real” sense. However, as we know, fantasy is one thing, and reality is quite another. And since reality is generally speaking a big pile of shit, it stands to reason that someone pining for their game character waifu (or husbando, let’s not forget them) might end up a bit disappointed if said waifu were real. But why? Let’s find out both the answers to that question and also possibly to why I make such terrible life decisions.  Here they are listed in random order, along with their respective official art/game CGs. 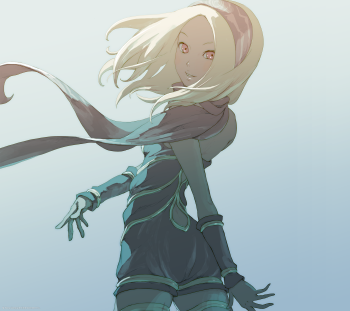 In almost every way, Kat would be an amazing catch.  She’s bright and determined.  She has a strong sense of self but doesn’t take herself too seriously.  She’s exceedingly hot (I do have a shallow side, I won’t lie to you.)  And finally, she’s got the unique ability to shift gravity around her, letting her fly through the air by “falling” in a different direction than gravity would normally allow.  This is the central mechanic of Gravity Rush and is part of what elevates it well above the standard action game.  Seems like a useful skill to have in general.

As great as Kat is, though, there’s one problem: her gravity-bending powers are a bit indiscriminate in practice.  When the player suspends Kat in mid-air before choosing what direction to send her “falling” into, other objects and even innocent bystanders in her immediate vicinity are caught in the same suspension.  Sending Kat off into another direction in this case also flings anything and anyone in the affected area through the air.  This isn’t such a problem for the inanimate objects that get caught up in Kat’s gravity field, but for the living things it is most certainly a problem.  Not that she’d ever intentionally do that to anyone, but you’ll send people flying to their deaths often enough during a playthrough of Gravity Rush even if you’re not trying to do it.  So just hanging around her might end up with me getting accidentally flung into a brick wall or off the edge of the city into the abyss below.  Though Kat honestly might be worth taking that risk. 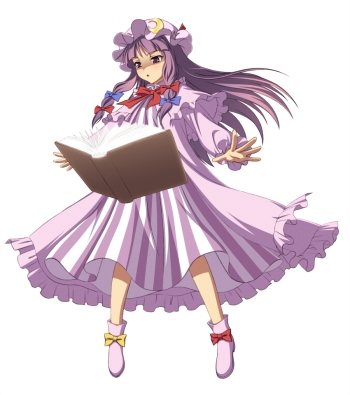 Patchouli is my favorite Touhou character.  The characters in this long-running shoot-em-up series aren’t all that fleshed out in the games themselves — the fans do a lot of the heavy lifting through their own doujin works that include fan games, comics, and animations — but Patchouli isn’t really that complicated to begin with.  She’s introduced in Touhou 6: Embodiment of Scarlet Devil as the librarian of the Scarlet Devil Mansion.  This naturally means that you have to fight her and endure her insane bullet patterns.  Outside of EoSD, though, Patchouli doesn’t seem to care for fighting very much, preferring to stay holed up in the mansion’s giant library surrounded by her books, studying and drinking tea.

So Patchouli is absolutely my kind of woman: such a complete shut-in that she never bothers to wear anything other than her pajamas (at least that’s what I think those robes are.)  However, it would be extremely dangerous to try to date her.  Not so much because of Patchouli herself, but rather because of her employer: Remilia Scarlet, the mistress of the Scarlet Devil Mansion and a straight up vampire girl.  Remilia and her even more dangerous little sister Flandre are supposed to be the descendants of Vlad Tepes, the real-life medieval Romanian ruler also known as Dracula.  Since Patchouli generally doesn’t leave her library, then, you’d have to brave the mansion and the vampiric sisters living there, and that might end up with you getting put on the mansion’s menu.  I don’t think I’m quite so brave to risk that. 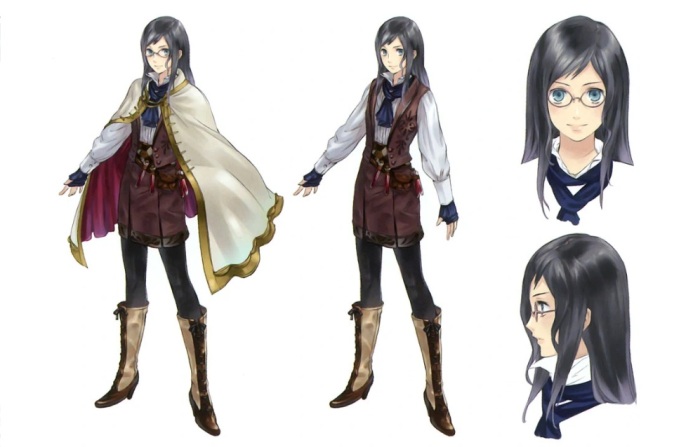 Skilled alchemist Astrid Zexis has a lot going for her.  On paper, anyway.  She has a quick mind and a sharp wit, she owns her own business, and she’s got that girl with glasses appeal that seems to be so popular these days.

However, she’s also careless and lazy to an extent that amazes even me.  As a result of her shitty attitude, by the beginning of the JRPG Atelier Rorona her alchemist shop in the capital of the Kingdom of Arland is failing and about to be shuttered.  The townspeople who might normally speak in her support hate her for screwing up their orders and generally causing a lot of trouble, so they seem more than happy to let her business flounder.  Despite her predicament, Astrid is still too lazy to actually do anything about it, so she very generously hands ownership of her atelier over to her apprentice Rorona, the clumsy but determined main character of the game.  Everything works out eventually, but that’s primarily thanks to Rorona constantly busting her ass to meet deadlines set by government agents who are working under orders to close the shop unless she can fulfill certain requirements on a regular basis.  Astrid admittedly does get around to doing some things to help Rorona, but at that point she’s just gaining back a few of the many points she’s lost. 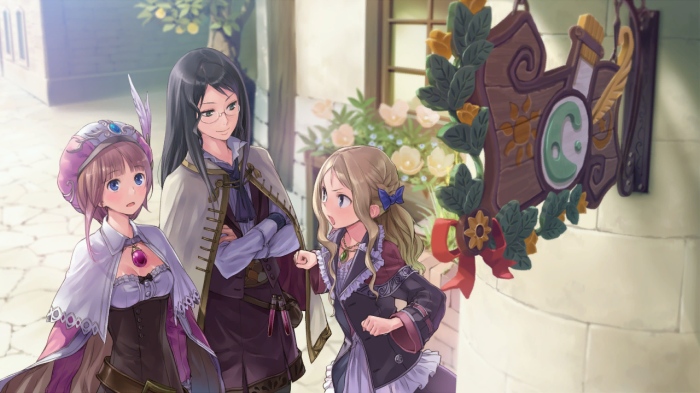 Astrid, center, pushing her failing atelier off onto Rorona, left, at the beginning of the game.  Also pictured, right: best girl Cordelia.

If you really need to know about Astrid, you might ask supporting character/party member Sterkenburg.  This stern young knight dated Astrid for a while and it didn’t end well if their interactions in the game are any indication.  I’m sure there are two sides to that story, but Astrid still seems like a real handful.  I know this because I had a relationship fall apart once because one of the partners in said relationship was an Astrid, and that Astrid was almost certainly me.  Hell, maybe I should date someone like Astrid.  Two assholes with fuck-off attitudes would probably suit each other quite well, wouldn’t they? 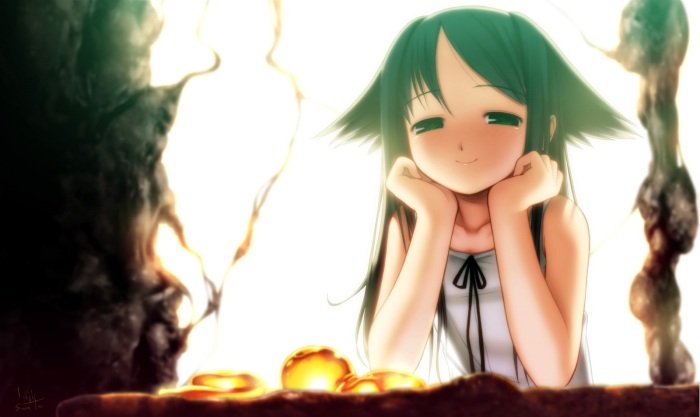 Now now, before you say anything — Saya’s on this list only because of the weird circumstances surrounding her existence.  For the uninitiated, Saya no Uta is a visual novel about one Fuminori Sakisaka, a medical student who has an accident that gives him a rare type of brain damage.  This condition makes him perceive everything in the world as disgusting to all his senses.  Even his friends now look, sound, and smell like bizarre rotten meat-creatures.  However, one single being on Earth appears to him as normal: Saya, a strange girl who discovers Fuminori while he’s contemplating suicide.  Fuminori clings to Saya as the one remaining thing in his life that seems pure and good, and Saya becomes just as attached to Fuminori.

Playing Saya no Uta, I couldn’t help but think that if I were in Fuminori’s place, I’d probably fall for Saya too, and that scares me a bit.  I won’t spoil it here, but if you want to read my take on how well Saya no Uta weaves its romance and horror elements together, check out the piece I wrote last Valentine’s Day on the game.

So hey, happy Valentine’s Day again.  Or not, if you hate this holiday, which I’d understand for a variety of reasons.  As for me — the above post is about as romantic as I can possibly get, which should tell you a lot.  Look, I couldn’t even be bothered to write a decent title for it. It does fit this holiday, though, doesn’t it? A tossed-together bullshit post, I mean. The equivalent of buying an off-brand heart-shaped box of chocolates at CVS. You deserve better than this. I’m sorry.

2 thoughts on “Yet another Valentine’s Day post (or, four game characters I might want to date if they were real but probably shouldn’t)”