Well!  We managed to almost get through the first month of the decade without a total global disaster occurring yet, so I guess that’s good.  More importantly, I got halfway through my latest deep reads series of posts this month, so check out the first and second parts of that if you haven’t already.  Since life in the world and here in my country continues despite all the unrest we’re going through, we may as well keeping listening to good music and reading good blog posts.  Here are some of those. 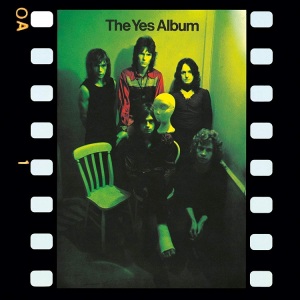 I guess it’s tradition now that I include at least one classic prog album in my listening log, so here’s another one.  Out of all the big old classic prog bands, Yes is arguably the most positive in tone (they named themselves “Yes” for just that reason supposedly) and The Yes Album is maybe the most positive-sounding of their classic period, which just happens to start with The Yes Album.  It’s the first one of theirs I heard, and it’s a great introduction to the band, featuring some typically long as hell songs with a lot of impressive solos and the insane, seemingly meaningless lyrics of unearthly high-pitched singer Jon Anderson (no, that’s not a falsetto he’s singing in, that’s really his regular voice.)

My favorite track on the album is “Starship Trooper”.  Everything about it is great — it’s sort of a combination of folk-rock and space-rock, which probably sounds like it shouldn’t work but really does.  I don’t know if it has anything to do with the Heinlein novel (it’s always hard to tell with Mr. Anderson’s bizarre lyrics) but the title does remind me of the famous shower scene from the film adaptation, which affected me so deeply when I saw it as a kid.  I also really like “I’ve Seen All Good People”, a song you’ve probably heard a bit of in a commercial or on classic rock radio if you’ve ever bothered to turn it on.  I think it was in an Intel commercial once.  Excellent album, anyway.  If you need to hear some music that feels positive even though you can’t understand what the hell it’s about, try it.  (For all the JoJo fans — “Roundabout” is on the following album Fragile, which is also excellent.)

I always feel the need to balance the moods out with the music I listen to over the long run, so to balance the sunshine and happiness of The Yes Album here’s a Radiohead album.  The Bends is one from my childhood — it came out a bit before I was old enough to be an angsty teenager, but it was there for me when I got to that point and got it along with OK Computer and Kid A.  And damn if this album wasn’t tailored exactly for an introverted 13 year-old boy to connect with.  The music has a sharp edge throughout, and Thom Yorke’s singing has a matching bitter, sarcastic feel to it.

However, this music doesn’t feel whiny or anything, partly because of that sharp instrumental edge and partly because Yorke’s voice wasn’t whiny like another popular 90s frontman’s (you know who I’m talking about maybe, no need to say his name) but mainly because most of the songs still hold up well. “Just” is especially good, my favorite on the album.  I also put “My Iron Lung” up because it captures that old teen angst from around my childhood/school years better than anything else.  Not sure that one holds up as well, but you can’t reason with nostalgia.  Though should I really be nostalgic about that time in my life?  I don’t know.  Let’s just move on. 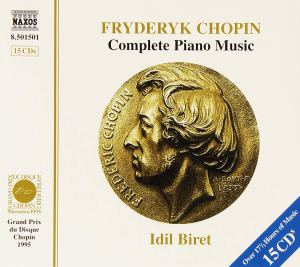 Highlights: too many to name, but here are a few samples

This album is really testing the format I’ve been using for these posts.  This truly is a collection of all the solo piano pieces written by the legend himself, the French-Polish Romantic period pianist and composer Fryderyk (or Frederic) Chopin.  This guy is claimed by both France and Poland as a kind of national artistic hero, and for good reason.  Chopin hits a wide range of emotions using only a piano.  There are plenty of longer epics on this collection, but a lot of these pieces are also very quick and catchy — a few are even under a minute.  Anyone who has a bias against classical music in general as being “that boring old stuff” should really give Chopin a try.  He’s one of my favorite composers.  In fact, if you check out the links above, you’ll discover where I got the original name for this site.  (Didn’t last very long as the “official” name, but I suppose it still is the name of the site in some sense.)

Pianist Idil Biret also does a fine job playing all these pieces.  At least I think she does.  I’m no expert.  I can scrape by with a few myself, but I make them sound like shit.  Biret is a real professional.

And now for the featured posts:

“Classical Music is Dead”: Misconceptions and More — rxtrogression takes on the many misconceptions a lot of people hold about classical music, a couple of which I mentioned in the bit above about Chopin, but also including equally mistaken ideas like “it all sounds the same.”  When you’re dealing with a set of music written across an entire continent and a few other places besides, and over a period of three centuries, you can’t generalize about it.  This piece does a great job at breaking that subject down.

5 things I’ve been doing wrong when writing posts — Irina recently attended a WordPress course and analyzes the wisdom its lecturers had to impart on writing a “good post.” These include such nuggets as “don’t go off on tangents”, “write fluff pieces”, and “don’t be too weird.”  Many of the blogs most worth reading break most of these rules, and Irina’s blog happens to be one of them, so you should check it out.

Trout Mask Replica — If you want to read some more comprehensive album reviews than the mini-reviews I write in these posts, you should follow Hi-Fi Adventures.  In this post, Matt analyzes Captain Beefheart’s Trout Mask Replica, one of the most classic “weird albums” ever to exist.  It’s a complicated and interesting work, just like Beefheart himself, and Matt covers the subject very well.

All Good Things Come To Those Who Wait: Delaying The Release Of A Video Game — If you’re disappointed about the delay of Cyberpunk 2077, simpleek’s post is a good one to read, detailing why it’s better for a game to be delayed than released in a rush and providing examples.  Reasoning these points out doesn’t remove the sting from delay announcements, but it might make them easier to bear.

The Gutenberg WordPress Block Editor – An Update — I hate the new editor, but Yomu at Umai Yomu Anime Blog has a more nuanced view of it, discussing both its strengths and weaknesses.  Maybe I’m just not willing to try anything new at this point, no matter how good it might be.

You Best Took it Serious When You Heard the Tone. The Persona 3 Retrospective Part 3: Presentation — You know the deal.  It’s about Megami Tensei so of course I’m going to talk about it.  This is the next part in Aether’s insightful Persona 3 retrospective, this time getting into the game’s distinctive and beautiful presentation.

Finally, if you haven’t already, be sure to check out Red Metal’s Star Wars sequel trilogy reviews, starting with The Force Awakens.  They’re full of spoilers, but if you’ve seen the series and want some in-depth analysis of these films’ characters, plots, general feel and all the rest, you should absolutely read them.

So that’s it for the month.  I know this post is coming a bit early, but this week is going to be hell for me, so I thought I may as well write this end-of-month piece before I get mired in bullshit as usual.  I do plan to finish the Disgaea deep reads sub-series in February, though.  And if you’ve liked these commentaries I’ve been writing, I have good news: I already have plans for #3 and #4 in the wider series.  Might take a while to actually write them, but they will happen.  Once again, you probably won’t be surprised by what I’ve decided to write about.  Until next month, take it easy.