I know I said I’d be off for the rest of the year, but there’s still one piece of old business for 2019 left to address. So let’s get right to it:

Quite an album cover, isn’t it?  Pretty magical in my opinion too, at least as far as the subject matter goes.  Magic is an album recorded by Japanese fusion band T-Square, which has existed in various forms from the late 70s up until today.  These guys along with Casiopea were apparently a big part of 80s fusion.

The problem is I don’t seem to like 80s fusion very much, not even the later Casiopea stuff I’ve listened to.  70s fusion, sure, I’m into it.  But 80s fusion might just use way too many cheesy, ridiculous synth tones for my taste.  Some of those are on Magic too, and that might also be part of why I’m not a fan of the instrumentals here.  Half the songs on this album are vocal pieces, however, and I like those.  These feature lyrics in English sung by famous Filipina vocalist Marlene (yeah, just the one name) who I only learned about last week.  Her singing is unbearably cute and uplifting and makes the album opener “It’s Magic” as well as “Sunshine Sunshine”, a song you may be shocked to hear that I really like.  I’m not crazy about the message (which is essentially “don’t mope around, just be happy” — yeah, if only it were that easy) but when I listen to the song, it’s impossible not to imagine Marlene bouncing around a stage while singing the lines “SUNSHINE SUNSHINE IT’S A SUNNY DAY SUNSHINE SUNSHINE LOVE IS HERE TO STAY!” and that does actually make me happy.  So maybe this stupid shit works.  Anyway, Magic is mostly pretty good, and maybe you’ll like it more than I do if you’re not allergic to cheesy 80s synths. 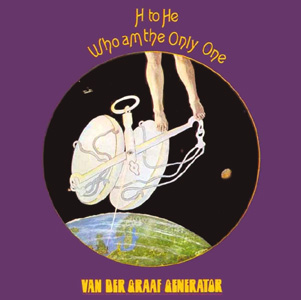 Hey, was I being positive there for a few minutes?  Fuck that!  I know just the cure: some Van der Graaf Generator.  This was an English prog rock band that started back before prog was even really a thing, fronted by excellent singer/crazy lyricist Peter Hammill.  VdGG was pretty uneven in my opinion, but when they were good they were great, and H to He (referring to the solar fusion process — no idea what the rest of the title means) is one of their best albums.  This is dark, bitter, sad artsy rock featuring Hammill singing what sound like a lot of very personal words over a saxophone/organ-dominated background.

Which you might not think you’d be especially into depending on your tastes, but the songs here are really good.  “Killer” is energetic and catchy and has a monster riff that I love, and “House With No Door” is a ballad sung by Hammill sounding like he just had his heart torn out.  My favorite is “Lost”, though.  It meanders like crazy through its 11 minute run time and bizarre time/key signature changes, all classic prog-style, but it works because the whole song is about a guy who’s lost his love and is wandering in the same fashion.  Nothing pretentious here, it’s really just a love song.  Check it out!

So it’s only two albums I’m putting up for your consideration this time, but I hope the contrast between them is enough to cover pretty much everyone’s tastes.  If it isn’t, try out some of the following excellent pieces by my fellow blog writers.

Shadows of Mass Destruction.  The Persona 3 Retrospective, Part 2-Gameplay — Aether dives deep into Persona 3 in his continuing retrospective series on the game.  If you like the Megami Tensei content I post here (what’s that, about two-thirds of my site?) you should follow Lost to the Aether as well for some great in-depth analysis.

Humanity Has Declined: Nameless Adventures With Incalculable Entities — Scott of Mechanical Anime Reviews writes about the uniquely weird anime series Humanity Has Declined and why it’s worth watching.  I liked the show a whole lot, and Scott captures the essence of it very well.

Editorial: Supporting the Little Guys — Professional and semi-pro game journalism sites are largely copy-and-paste clickbait outrage factories, and Pete Davison of MoeGamer takes on some of the problems this causes in this piece.

[GAME REVIEW] Mega Man 2 — Red Metal of Extra Life reviews one of the best NES games in such a thorough way that I don’t think there’s anything else to say about it.

Chapter 754: Hachinohe Station Giant Lanterns and History Museum — If you have any interest in traveling to Japan, or traveling anywhere for that matter, be sure to follow The Flying Tofu, now on part 754 of her travels through Japan and other lands.  I can’t go anywhere at the moment or anytime in the near future, so I like to read a few travel blogs instead, and this is one of them.

And that’s it once again.  A preemptive happy new year to everyone — doesn’t seem like it’s going to be a great year coming up in general, but we’ll see.  The last few years have turned me into a real fatalist, both as far as my personal life and public/world events have gone. But what the hell.  There’s not much ordinary people like us can do (assuming you’re ordinary too, dear reader — if you’re extraordinary, can you please do something about all this shit?)

Anyway, if all else fails, just remember this: no matter how much things might suck, nothing is forever.  That’s what I tell myself, anyway.  Until next time!