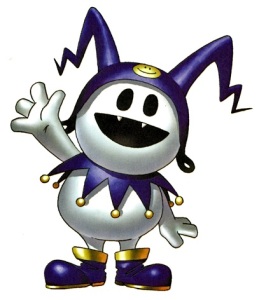 Who better to honor on the first day of this Christmas series than Jack Frost?  He’s not only the personification of winter, which all of us in the Northern Hemisphere are living through right now.  He’s also the closest thing to an official mascot for the Megami Tensei series as a whole and for its developer, Atlus.  Jack Frost, as far as I know, has been in every Megami Tensei game ever created (or at least in all the ones I’ve played.)  He even starred in Jack Bros., a bizarre spinoff for the ill-fated Virtual Boy that most people in the West probably only learned about when the Angry Video Game Nerd covered it in his Virtual Boy retrospective video on Youtube, and even he didn’t seem to realize exactly what it was.

In his normal form, Jack is usually a low-level common demon you’ll encounter in the early game.  He tends to be pretty friendly but also enjoys playing tricks on humans, so it may be just as difficult to recruit him as some of the more outwardly hostile or icy demons.  The player shouldn’t be deceived by his cute looks — Jack Frost’s tricks can end up getting your entire party killed if your team is weak to his ice skills. 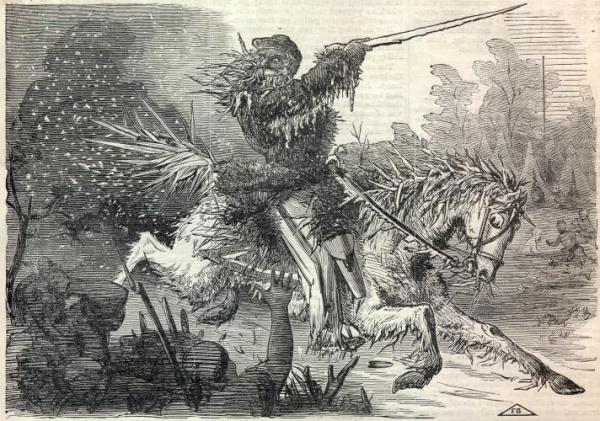 Jack Frost in earlier times, when he served as a Union general in the Civil War

The only real downside to Jack Frost being Jack Frost is that he has to share a name with not only the mythological being he’s derived from, the personification of winter, but also with all the other characters derived from him. Namely that Disney character or whatever he is (Dreamworks? The assholes who made that annoying Sing movie? I don’t know) and the shitty, extremely horrifying Michael Keaton movie from 1998 where he turns into a snowman.  Both of these guys clog up the Google Image Search results for “jack frost”, so they can go to hell.  Not Michael Keaton I mean, just the character he played and the movie he was in. 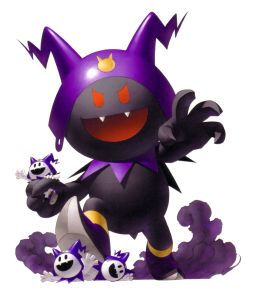 Black Frost brutalizing some regular Jack Frosts. Even when he’s being beaten up, Jack Frost has that happy expression.

Jack also has several relatives in the Jack family of demons, some of whom are far more powerful.  Most notable among these are his fire-based brother Pyro Jack, the emperor of the ice fairies depicted as a giant Jack Frost in a king’s robe and powdered wig King Frost, and Black Frost, a Jack Frost who sought great power and ended up turning evil.*  Black Frost is typically a mid-level demon and is a great asset to the player thanks to his having both ice and fire skills and resistances, so you should definitely try to fuse him any time you can.  He’s such a useful team member that some players keep him on well past the point where his level should have made him obsolete.  Those resistances are just that important in a Megaten game; if you have a demon strong to ice, fire, and dark attacks and without any weaknesses you can wipe the floor with a lot of standard-issue grunts and even with some bosses, even if they’re at a significantly higher level.

I hope you liked the two-for-one demon deal you got today, because it probably won’t happen again.  Check back tomorrow!

* Japanese language minute: The name “Black Frost” is an attempt at a translation of the Japanese name ジャアクフロスト with the “ジャアク/jyaaku” part written 邪悪, which is also pronounced ジャアク but means “evil.” These kanji puns just don’t translate.