A review of Cop Craft

Let’s finally close the book on the summer 2019 anime series Cop Craft.  My weekly review posts were all extremely spoiler-laden, so if you’re looking to go into Cop Craft more or less blind, read this spoiler-free review instead to find out if you might like it enough to check it out on Funimation’s streaming service (or to find the episodes in other very obvious ways that I won’t address here.) 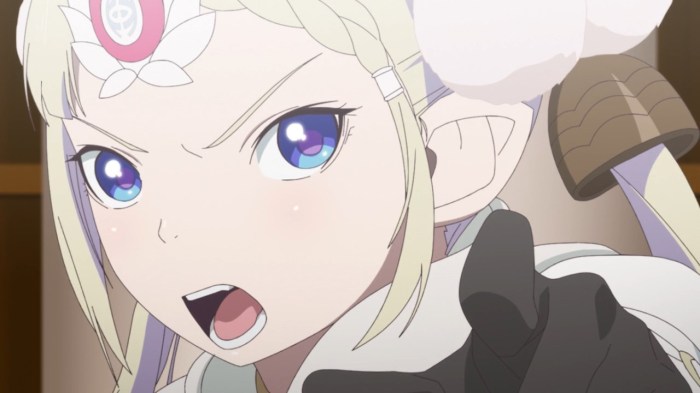 Tilarna will chase down and arrest all pirates

Our tale starts with Kei Matoba, a grizzled detective in San Teresa, a large American city on the Pacific coast (which I’m still positive is meant to be alternate universe San Francisco.)  San Teresa has a special status as the gateway city to a group of immigrants called Semanians from a planet connected to Earth through a mysterious wormhole gate thing that appeared out of nowhere some years back.  At the beginning of the series, Kei’s partner is killed by a corpse being controlled by Semanian magic during a sting operation gone wrong, and in the course of the investigation a new partner is assigned to him: the Semanian knight Tilarna Exedilica, a young noble lady with a haughty bearing but an honest and straightforward personality.  Kei and Tilarna clash at first, but they end up working together and even developing a strong bond as they learn to complement each other’s strengths and weaknesses. 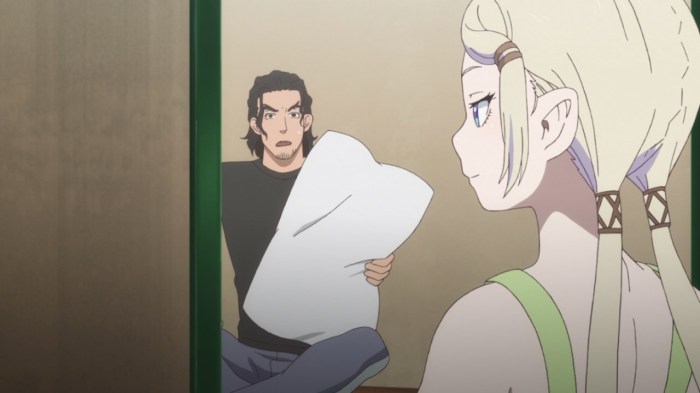 They also live together in an Odd Couple-style arrangement

If that sounds familiar, it might be because this is the basic setup of every buddy cop series and movie ever made.  Cop Craft was a bit different from most of the other series airing last season for just that reason — it borrows a lot from western sources, namely from American cop dramas, and throws in a whole lot of sci-fi and mixes them together.  This invited a lot of comparisons to Bright, the Netflix original movie with a somewhat similar premise that took a beating from critics in 2017.  Cop Craft is based on a light novel series that started in 2009, though, so there certainly wasn’t any inspiration from that film here.  In fact, a better comparison might be another Will Smith movie: Men In Black, only Tommy Lee Jones is 30 years younger and Will Smith is a cute sword-wielding girl from another planet where due process and defendant rights don’t exist. 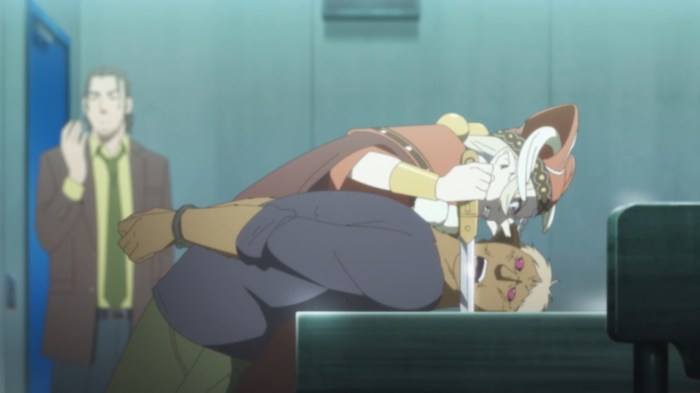 The story of Cop Craft is decent enough — there are a few plots that start and get resolved throughout the 12-episode run that are presumably taken from writer Shoji Gatoh‘s light novel work.  These plots are contained within a larger story about the clash of cultures between Earth natives and Semanians, a clash that plays out on a small scale between Kei and Tilarna.  This both gives our protagonists more depth and raises the story’s stakes, especially in the second half of the series, which deals directly with issues relevant to real life like nativism and xenophobia.  Thankfully, Cop Craft deals with these issues in a way that’s neither preachy nor heavyhanded.  Tilarna does face discrimination while working with Kei because of her origin, but the show doesn’t treat her detractors as faceless villains — they’re all depicted as real people with real fears.  Misguided fears, to be sure, because Cop Craft has an obvious anti-xenophobic message.  But that message is effective precisely because it treats these issues as complex.

The greatest strength of Cop Craft lies in its characters, however, and specifically in the relationship between Kei and Tilarna.  Kei is the jaded old cop who’s been forced to accept corruption and the influence of money and politics in his work, and Tilarna is the young hothead who acts before she thinks but who also forces Kei to remember his old ideals.  Beyond that basic archetypal stuff, these characters are just really well-written and grow closer over the series in a believable way. 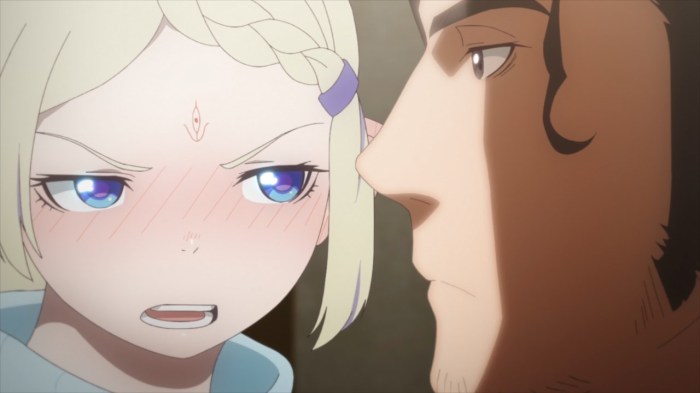 The context to this scene is pretty interesting, but I’ll let you find out about it for yourself.

There’s not much more I can say about the plot or characters without spoiling, so I’ll leave it at this: Cop Craft is worth watching just for Kei and Tilarna.  A few of the surrounding cast of characters are interesting as well, particularly the police coroner Cecil, but Kei and Tilarna are almost always at the center of the action, which is a good thing.

Speaking of action, there is action in this show and a lot of it looks lousy.  The animation in Cop Craft is wildly inconsistent, ranging from decent to awful.  If you saw the above stills and thought “wow, this show looks beautiful” — yeah, some of the still shots are detailed and nicely show off the excellent work of character designer Range Murata, but the action scenes look rough, with a lot of obvious animation shortcuts.  I don’t know much about the technical aspects of animation, but I do know what looks good to me and what doesn’t.  Most of Cop Craft looks like it was made on an extremely tight budget, with 95% of the detail reserved for the scenes where the studio obviously wanted to make Tilarna look really good.  Even some of the still shots lack detail to a distracting extent. 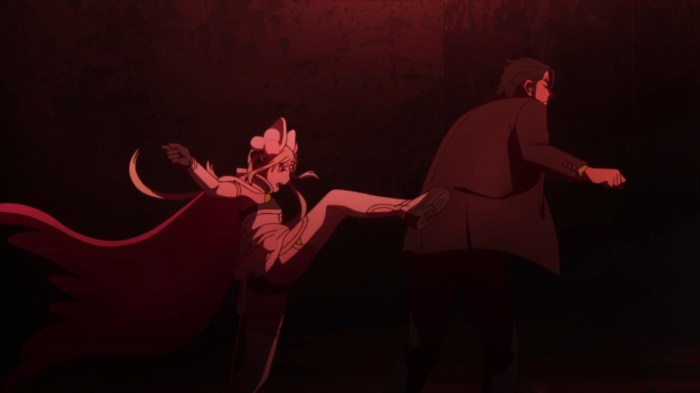 There’s also one episode that’s so dark you can barely make out anything.

I have to assume the studio (Millepensee, who also co-produced the widely hated 2016 adaptation of Berserk and what look like a few “cute girls doing cute things” comedies I’ve never heard of) just didn’t have the funds or time to make something that looked better. It’s a real shame — I know there are people who will avoid watching Cop Craft because of its rough animation, and I can’t blame them for that. This is a visual medium, and the visuals matter.

Still, if any of the above stuff sounds interesting to you, I recommend checking out Cop Craft, even if it is visually rough around the edges sometimes.  Look at it this way: if I told you the visuals and animation in Cop Craft were beautiful but that the characters and story were dogshit, I wouldn’t be recommending it at all.  If I want to see nice visuals and nothing else, I’ll look at my artbooks again. 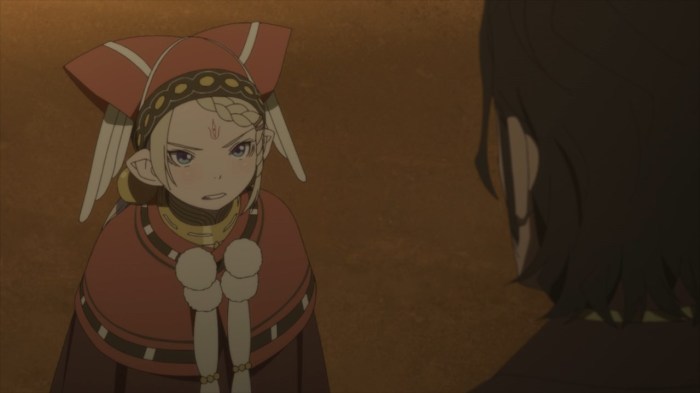 We got a lot of shots of Tilarna being cute and pouty, and that’s all that really matters

And that’s about it for Cop Craft.  Sadly, I don’t think we’ll be getting a second season considering how little attention the anime series seems to have gotten.  The light novel series is still being written and published, though, so there’s always a chance.  Maybe when the isekai craze finally dies down, there will be more demand for an urban sci-fi fantasy cop show and a better studio with more resources will be able to produce it, and then I won’t have to qualify my recommendation at all.

3 thoughts on “A review of Cop Craft”