On reviews, scores, and objectivity vs. subjectivity

I’m in despair again.  This time about review scores. 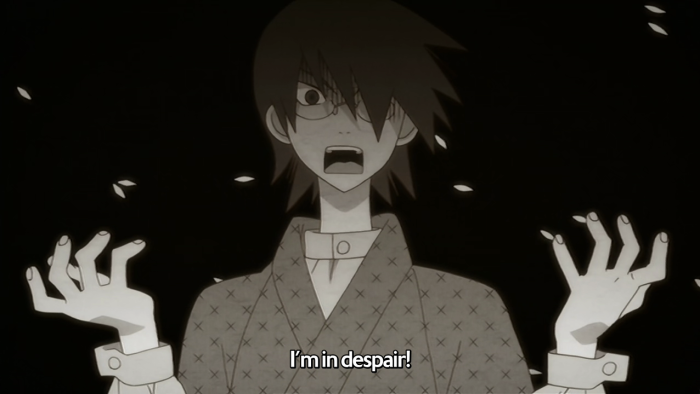 Let me back up about a decade and a half (I promise there’s a point to this trip through time, so don’t worry.)  Back in my school days, I used to follow two music reviewers: George Starostin and Mark Prindle.  These guys maintained websites dedicated to writing album reviews well before the modern age of easy blogging — before technologically untalented people like me could start free WordPress and Blogger accounts and dump words onto the internet without knowing anything beyond the most basic HTML tags.  Messrs. Starostin and Prindle were both excellent writers, very knowledgeable about music, and incredibly prolific (in fact, Starostin is still writing at a different address, though he seems to be on hiatus right now.)  Most importantly to me, they were independent voices that I felt I could trust far more than the hacks at Rolling Stone, Spin, and the other big music magazines.

However, Starostin and Prindle’s review styles were very different.  Starostin seemed to try to take a more objective approach to his music reviews.  While admitting that he couldn’t be totally objective, being a human with his own likes and dislikes when it came to music, he still tried giving a fair chance to artists whose styles he wasn’t naturally fond of (though he could and would tear an album up in a very entertaining way if he thought it was lousy.)  Prindle, by contrast, seemed not to give a damn about even trying to be objective.  He could and often did also write deep and interesting analyses of albums, but they also felt more personal in the sense that you were getting his opinions based purely on what he liked and disliked.  Prindle’s more personal style also came out in the various rants, anecdotes, and obscene jokes he’d drop into his reviews, usually without any warning to the reader.  Even though their styles were so different, I liked them pretty much equally, and I’m sure both of them have had a serious influence on my own reviewing style. 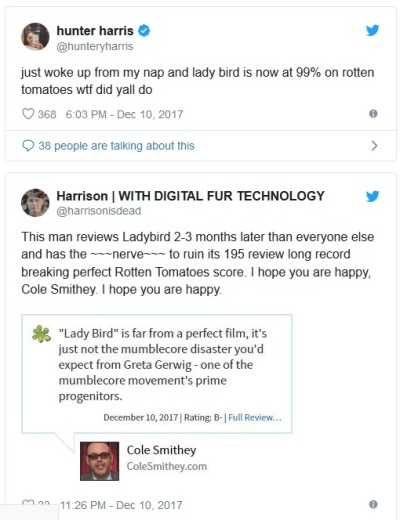 Source.  Though how “Movie X no longer has a 100% RT score” could be considered a story worth writing about, I have no fucking clue.

Now back to the present day, where people on Twitter and other platforms are tearing their hair out over the Rotten Tomatoes scores movies get.  Red Metal at Extra Life covered this already in a recent post about the reaction to the film Lady Bird getting one bad review from a critic, knocking its score down from 100% to 99%.  Some people were apparently losing their shit over this development.  If it can even be called a “development”, really.  No doubt they’d also be piling onto Red Metal if his own mixed review of Lady Bird had been factored into that score.  I haven’t seen the film, but I can say at the very least it’s impressive that a movie managed to get such dedicated fans that they’d scream bloody murder over a single poor review.

Or is that really what’s going on?  It looks to me like many people have expectations that certain artworks should be insulated from negative criticism, as though they have a God-given right to a perfect score on RT and maybe also on every other review score aggregator.  I have no idea where these expectations come from.  Even among my favorite games and albums, I can’t think of a single one that I’d yell at a reviewer for over a poor review.  I’d certainly disagree with said review, but as long as it was reasoned out well enough, I’d just think “Fine, that person has a different opinion than I do.”  Because we all have different tastes, different perspectives, different life experiences.  Not everyone has to like what I like, and I don’t have to like something even if almost everyone else likes it. 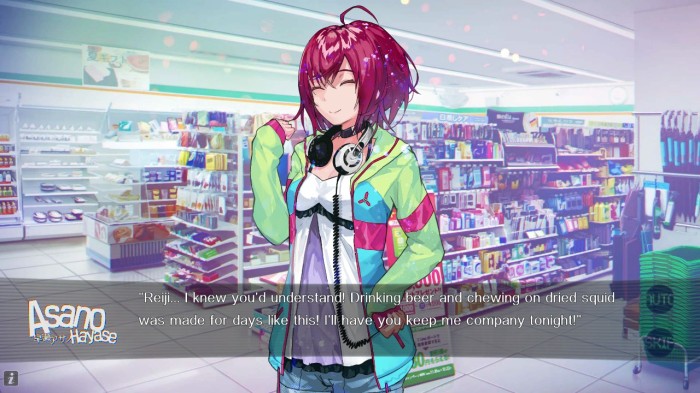 I like drinking beer, chewing on dried squid, and playing visual novels, but a lot of people don’t, and that’s okay.

So how should I approach my own reviews?  I’ve been writing reviews of games and other media for six years now (not on a very regular basis, as you can tell from looking at my index of reviews and dividing their number into six, but still, six years is a long time.)  I always try to write my reviews in such a way that they’re useful to every reader who follows this site or comes across it through a Google search.  But when it comes to the score I assign a work, I sometimes find myself facing this conundrum: if I score the work based too much upon my own subjective tastes, the score won’t be meaningful to a reader with different tastes from my own, and if I score it based too much upon some kind of as-objective-as-possible balance of factors, I’m removing my own views from the process so completely that I may as well not review the work at all.

I usually try to strike a balance between these two extremes, but sometimes that’s difficult, especially when the work I’m analyzing is directed at a niche audience.  I’m facing just this issue with the game review I’m currently writing.  Maybe I should just not worry about the problem at all and write whatever I want like Prindle, or maybe I should still try to take a more objective view of things like Starostin.  Maybe I’m overthinking this like I overthink every single other aspect of my fucking life. 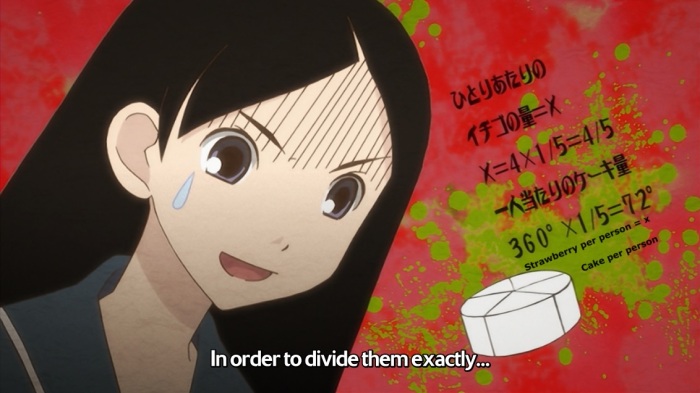 I have another question for you, the reader: if you write reviews, do you run into this problem?  How do you resolve it?  Or is it even really a problem and am I just overthinking things? If you don’t write reviews but only read them, do you really care about how objective or subjective the reviewer is trying to be?  And should anyone even care about Rotten Tomatoes or Metacritic scores aside from the film and game studios and distributors?

Sorry, that was more than one question.  You don’t have to answer all of them if you don’t feel like it.  Or any of them.  In the meantime, I’ll go back to finishing my next review.  Maybe one day, I’ll write a review that will get me a headline on Indiewire about how I’m an asshole who made people on Twitter cry.  I can only hope.

18 thoughts on “On reviews, scores, and objectivity vs. subjectivity”