I’m still dedicated to writing about games that you don’t have to pay one cent for (or one of whatever sub-denomination of currency you use.)  But the problem is that a lot of free games out there are buggy, boring, and/or unfinished, some of which I suspect are student projects that would otherwise be bound for the trash.  Or they’re MMOs, which I have no interest in playing no matter how well-made.  So I started digging around, this time on itch.io, to find something at least worth the time it would take to download, and I came across a strange sub-genre of procedurally generated games.

Well, the term “game” might not quite fit in this case.  These are more like simulations or art pieces that you can walk through.  Still, that won’t stop me from writing about them.  I’ve already written about a game that consisted entirely of a five-minute boat ride and nothing else, and Becalm is about as much of a game as the following programs are. 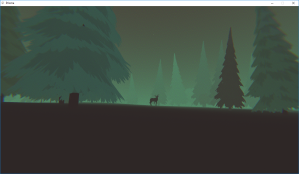 If you like the general idea of the world of Minecraft but you hate all the gameplay parts of it, Pattern is for you.  This program generates an endless land/seascape featuring forests, beaches, and what are either lakes or different sections of an ocean surrounding a bunch of islands.  It’s hard to tell.  As you run around aimlessly, night turns to day and back to night while the trees, ground and sky change color from green to red and back and a minute-long ambient loop repeats in the background.  There are a few interesting sights that break the monotony, but this describes 95 percent of the experience.

I might have sounded pretty underwhelmed in that last paragraph, but I basically like Pattern.  I find it relaxing.  There’s nothing going on in this world, at least from what I could tell, but that’s okay.  According to Talking Heads, Heaven is a place where nothing ever happens, so maybe Pattern is what Heaven will be like for those lucky enough to get in? 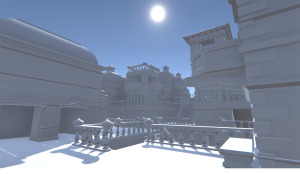 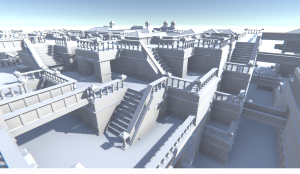 If Pattern isn’t a game, Wave Function Collapse really isn’t a game.  It consists of an infinite M. C. Escher-esque city full of staircases, balustrades, and classical-looking columns and arches that you can run over, across, and through, and that’s it. There’s no music, there’s not even sound, and there’s also apparently no way to quit the program other than alt+f4.  This one is kind of interesting just because it really does look like a city designed entirely by a computer – completely cold and inhuman, even lacking color.  Reminds me of the Copied City from NieR:Automata.

I had no idea what the title of this program meant, so I looked it up. According to Wikipedia, “wave function collapse is said to occur when a wave function—initially in a superposition of several eigenstates—appears to reduce to a single eigenstate due to interaction with the external world.”  So there you go.

According to creator Jonathan A. Daley, SiCoTa N is “[a] procedurally generated interactive environment whose movement is driven by the trigonometric functions of Sine, Cosine, and Tangent.”

Now look, I barely know a thing about how to do math beyond everyday business-related stuff.  I do remember studying sine, cosine and tangent from the trigonometry class I took in high school, but I don’t really remember what they are or know how they relate to the insane shit going on in this program, what with the cubes bouncing and the undulating polygons and block towers.  It is possible to jump off the edge of the platform to escape the madness (see right) but that won’t stop the bizarre noise music in the background from playing.  I think the background music is also procedurally generated, in fact.  I get the feeling that I just don’t understand SiCoTa N, but maybe you will if you’re a math major.

Okay, I promise I’ll review real games next time.  Probably.  I do recommend Pattern as a stress-reliever, though.  Works for me.