Yes, I caved in and bought the Persona 3: Dancing in Moonlight and Persona 5: Dancing in Starlight package for the PS4.  Yes, I am ashamed of myself for buying this grossly overpriced cash-in.  Yes, I hate myself completely and utterly, and you can’t possibly put me down in any way I haven’t already done to myself. 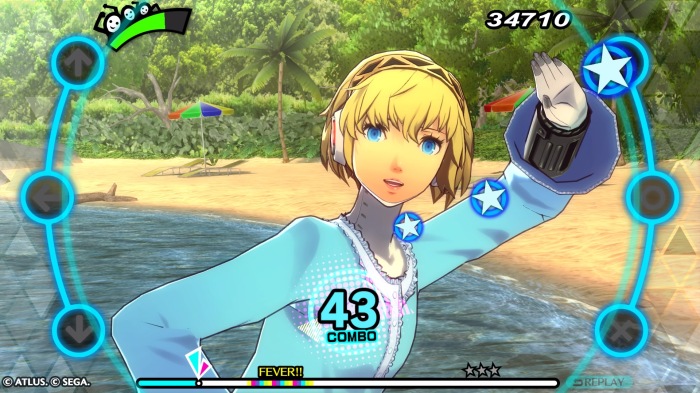 Aigis is in it, so I had to buy it. That’s my flimsy excuse.

Now that the self-hatred part of the review is out of the way, how are these games? They’re… all right.  Fine.  Kind of disappointing, to be honest, and not for the reasons you might expect.  The Persona series has one of the best sets of soundtracks of any game series ever, thanks to composer Shoji Meguro and the many performers who play the music.  So I didn’t expect to be disappointed by the tracklists to these games.  Persona 4: Dancing All Night, released back in 2015 for the Vita, was no slouch in the tracklist department and featured a lot of good remixes.  The remixes in P3D and P5D, by contrast, are mostly pretty lackluster.  It’s not good when I end up greatly preferring the original track to the remix – if that’s the case, it would be better just to use the original track instead, and that’s what Atlus ends up doing with a lot of the featured dances.  Another problem is the length of each tracklist – only around 25 or so in each game, not counting DLC songs, and some of them don’t even feature the characters dancing but rather animated cutscenes from the games.  Considering the price tag of each game, this is really not acceptable.

Dancing was invented so Atlus could milk Persona games

Some fans have also been disappointed by the fact that, unlike P4:DAN, the P3 and P5 dancing games have no story mode option.  These games instead have very thin story sections that consist of Velvet Room attendants Elizabeth (in P3D) and Justine and Caroline (in P5D) transporting all of SEES/the Phantom Thieves to special dance studio Velvet Rooms in their dreams while they all sleep to have a dance-off against each other.  The two teams never actually meet, which is another disappointment – since they’re all dreaming, and the Velvet Room attendants assure them they won’t remember any of their dreams (isn’t that convenient) it wouldn’t have affected the games’ stories at all.  Hell, you guys already had the P3 and P4 teams meet in Persona Q, and they’ll all be thrown together again in Persona Q 2, so why weren’t these two games combined into one with separate modes for each team like Q was?

The closest thing we get to story mode is a social/confidant link system with eight conversations with each team member, including Elizabeth and Justine/Caroline.  These conversations are full of references to their respective games, so parts of them aren’t going to make a whole lot of sense to newcomers to the series, but at least we get something to do other than play the rhythm game section constantly.  Although the conversations do have to be unlocked by getting achievements, so you’ll have to work for them.

Well shit.  All I’ve done is complain about these games so far, and I don’t want to give the impression that I hate them.  So what about the positives?  The music is pretty damn good on balance – the original soundtracks to both games are great, after all, and even some mediocre remixes can’t ruin good tracks.  The new Persona 3 character models look great.  And the dancing itself is really well done.  Like in P4:DAN, each character dances in a way that’s very much an expression of their personality – Mitsuru’s dancing is elegant, Yusuke has a weird, artsy style, Akihiko and Makoto use a lot of fighting moves, Aigis is extremely precise, and Fuuka is kind of awkward but clearly trying her best.  The character pairings during dances are also pretty fun; it’s especially cute how Futaba tries to imitate the style of the main dancer when she joins in.  My favorite is Haru, though – I don’t remember if she ever dropped the fact that she’d formerly been a ballerina anywhere in Persona 5, but here she busts out some great-looking ballet moves.  Pirouettes.  Swan Lake?  I don’t know ballet that well, sorry.  I’m not cultured enough; I only specialize in stupid weeb games like these. 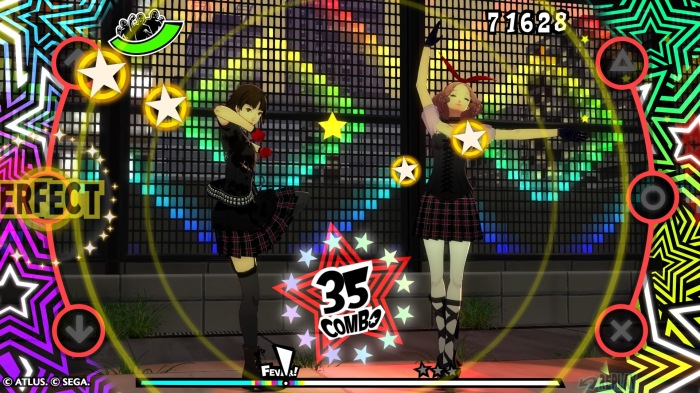 Ballet combined with aikido moves makes for a good combination.

I guess the biggest question is whether these games are worth buying at their unforgivably high sticker prices for people who haven’t played or aren’t especially fond of Persona 3 or Persona 5.  The answer is absolutely not.  I don’t usually mess around with bold text, and this is both bold and italicized, so you know I’m serious.  Not that P3D or P5D are really bad games.  To the average consumer, they’ll probably come off as serviceable rhythm games.  And if you see them on sale somewhere, I’d say at least one of them is worth buying for the non-initiate (probably not both, because they’re effectively the same game with different casts of characters and different tracks to dance to, which is partly why I’m reviewing them jointly.)  At a sticker price of 60 dollars each, however, they are stupidly overpriced.  The PS4 bundle, which includes both games and a digital copy of Persona 4: Dancing All Night for 100 dollars, is a better deal, and I might even say it’s worth getting if just to have P4:DAN on the PS4, which isn’t available separately, at least at the moment.  But that deal is hardly worth it for the non-hardcore fan.

If you’re a massive fan of the core games, you’ll obviously get more value out of these.  A lot of the content in P3D and P5D is basically dessert for people who finished P3 and P5.  We also get the expected fanservice with a lot of unlockable costumes, including the usual bathing suits and butler suits for the guys and maid outfits, swimsuits and fantasy bikini armor for the girls.  So if you’re into that kind of stuff, have fun.  There’s also plenty of paid costume DLC too, so have your fucking credit card or Paypal account ready if you really want it that badly.

Just pile on the fanservice boys, the more the better

Anyway, ratings.  I can only give each of these games a 4 on my scale – just passing.  The dancing is fun and all, and it’s nice to see our beloved P3 and P5 casts together again, but there were too many disappointments here with their respective tracklists to give these games anything higher, and I’m pissed off at Atlus for effectively using these games as a DLC delivery service.  As far as rhythm games go, the Vocaloid title Project DIVA Future Tone is far better, both in terms of value and variety of music, and it’s the one to buy if you don’t care about injecting Persona fanservice directly into your bloodstream. Bump that score up a point if you can get either or both of these games for a bargain, because they are basically good, but I’m still pissed off about the whole thing.

Maybe dessert truly is the best way to describe these games: buying and playing them are like gorging on cake.  Nice at first, and incredibly sweet, but in the end you feel sick and regret what you’ve done.

On the other hand, maybe it’s worth it to hear Akihiko’s underwear tips.

With that, I’m done spending money on games for a while.  I’m trying to keep my head above water and save some money to put a down payment on a house after the next housing bubble pops, so until Shin Megami Tensei V or Disgaea 6 forces me to finally buy a Switch, you can look forward to a bunch of reviews from my massive backlog, along with my planned soundtrack reviews, “games for broke people” reviews, the occasional post about law, and the constant depression and bitching and moaning I deliver.  In other words, nothing’s really going to change.

6 thoughts on “A review of Persona 3: Dancing in Moonlight and Persona 5: Dancing in Starlight”