For years, SimCity 2000 was one of my favorite games.  This city-building simulation was one of those games I grew up with – along with Civilization, Age of Empires, the original Mario and Sonic titles, the Thief series, etc.  So I thought, for a little while when I have bits of free time, that I’d return to the past, to a time when I didn’t have to worry about making god damn student loan and car payments.  You can now download SimCity 2000 from the games section of archive.org (god bless those people) or get it for a very low price at GOG, but I didn’t have to do either – I installed an old copy I still own of SimCity 2000 on CD onto an old copy of Windows 98 on VirtualBox. 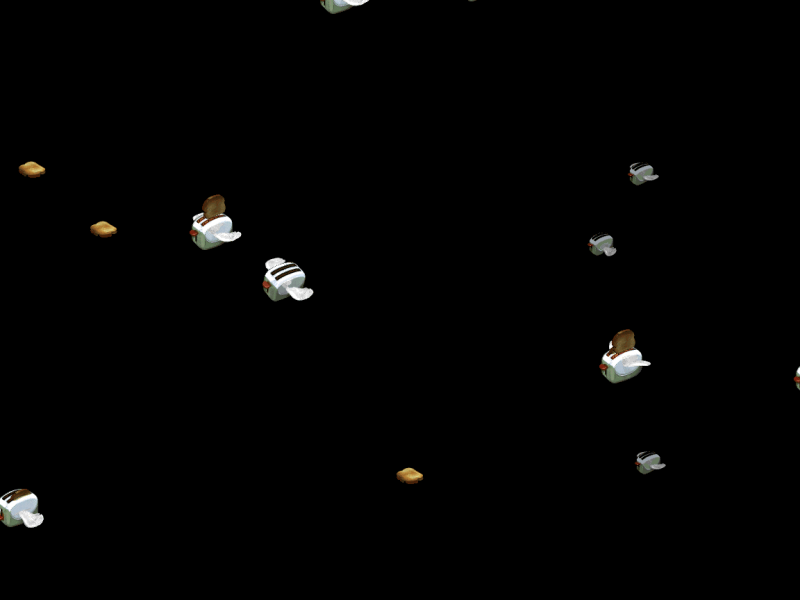 Instead of playing a reasonable game of SimCity, though, I’ve decided to make things hard for myself.  Our future is full of uncertainty – especially in this January of the year of our Lord 2017 – and I swear to God the people living in my SimCity will feel exactly the same sense of uncertainty.  They may also feel a profound sense of fear, division and mutual hatred.  Because they’re going to live in possibly the worst city ever devised.  We’re going to try to make the worst city possible, in fact, that will still attract citizens and remain in the black financially.  This is probably going to turn out part SimCity 2000 screenshot LP, part tutorial, part… whatever else I feel like throwing in, and it will run for as long as the game is interesting, or until the entire city burns down. 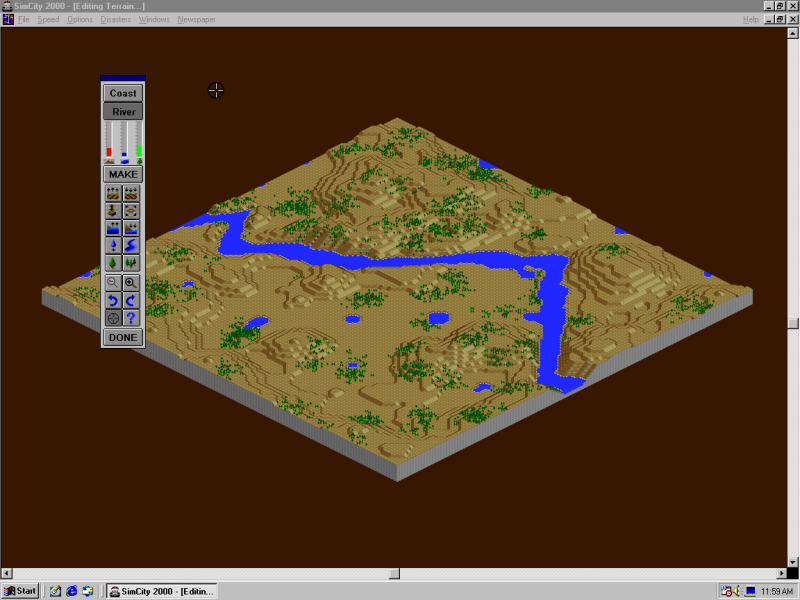 Here’s the starting screen, in which we can edit a map before we start building our city.  This randomly generated map looks great – a river and a nice flat plot of land to build on.
We’re not building a place where anyone in their right mind would want to live, though.  Let’s take out that river and move the tree and water sliders (the blue and green ones at the top left on the bar) down to zero. 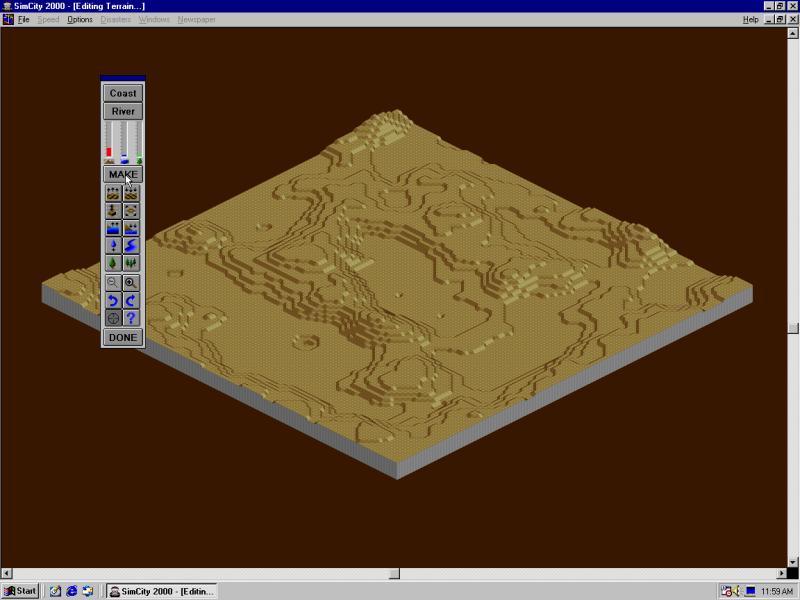 That’s better!  Damn.  Who wouldn’t want to drop everything and move here right away? 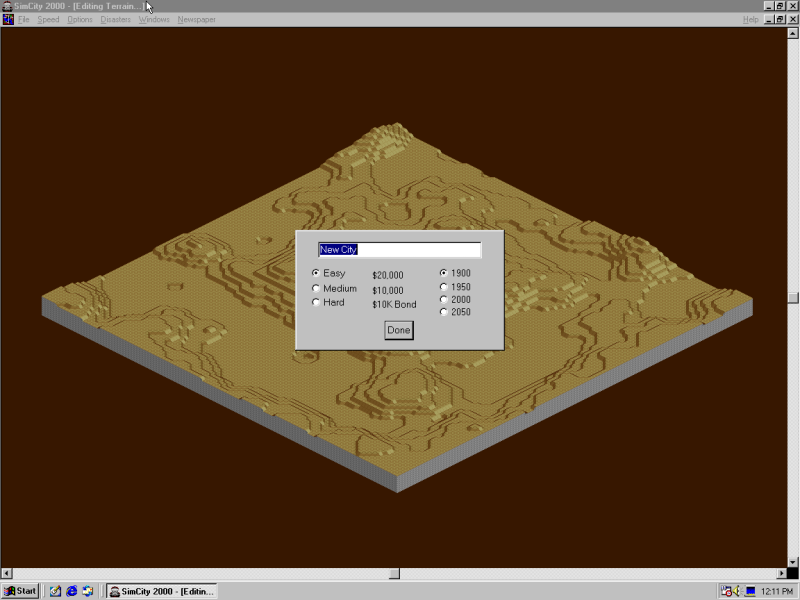 Time for perhaps the two most important decisions in a SimCity’s lifespan: when to begin building and how much money to start with.  And the name, though that can be changed later on by changing the city’s filename in the game folder.
Let’s start in 1900.  This guarantees that we will have as little technology as possible to use to our citizens’ benefit.  And playing Hard Mode goes without saying.  No Easy Mode for us.  Note that, like in Medium Mode, we’ll be starting with $10,000, but unlike in Medium Mode those ten thousand dollars will be borrowed dollars.  Meaning we’ll have to pay them back at some point, plus interest.
As for the city’s name… 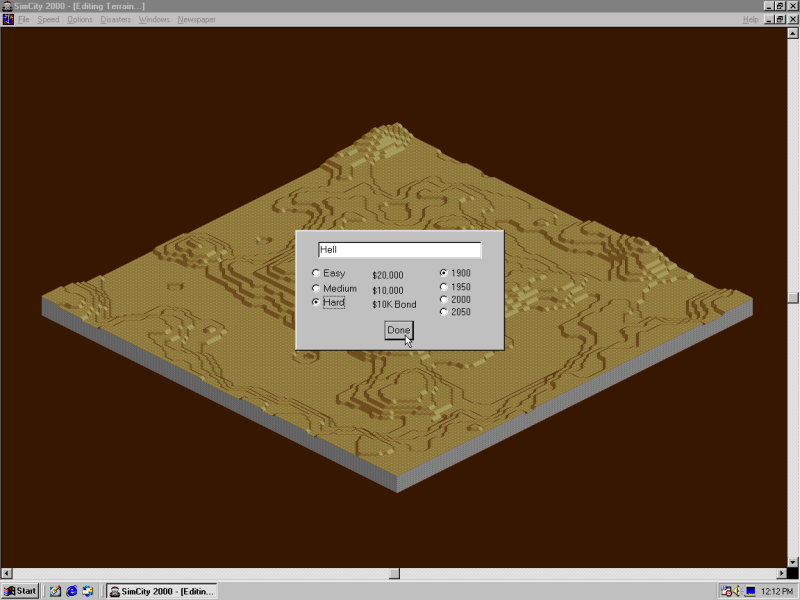 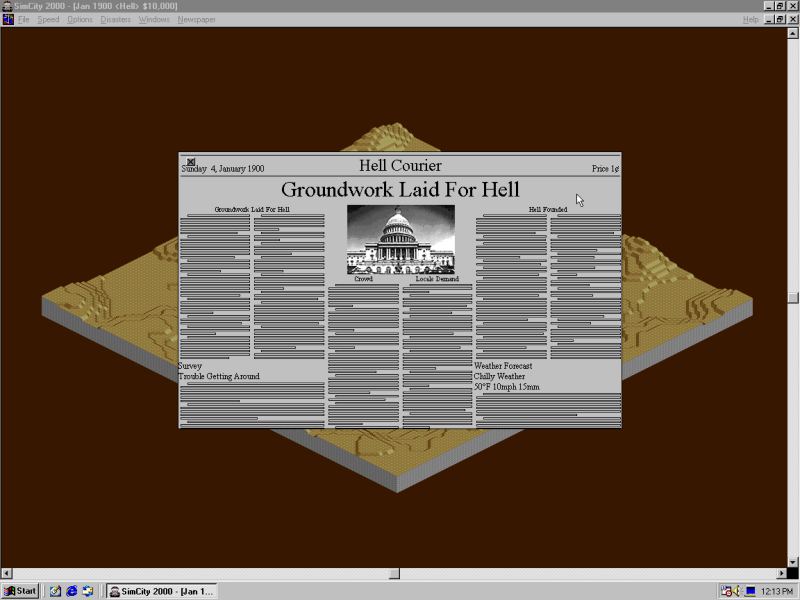 Upon starting the game, we find that our nonexistent city already has its own newspaper.  Amazing! 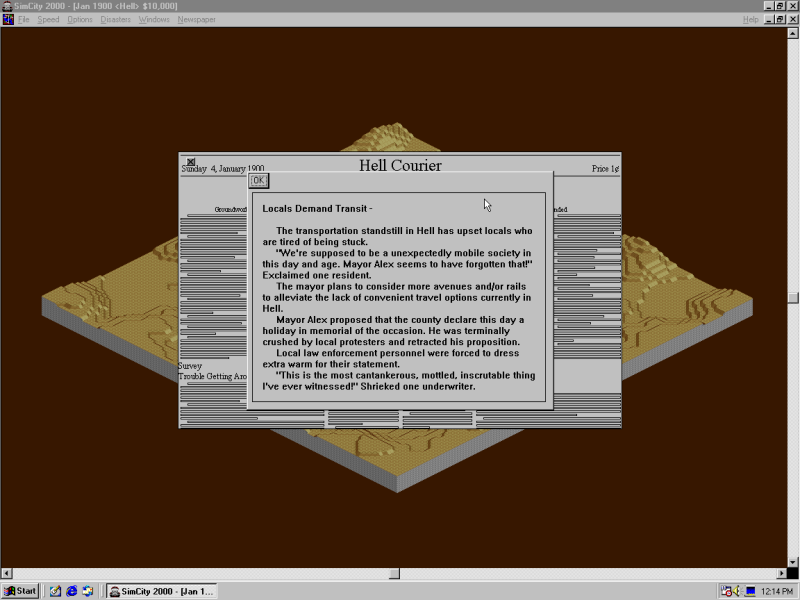 According to the Hell Courier, Hell already has citizens and traffic problems.  Even though Hell’s population is currently 0 and there are no roads or even structures of any kind built yet.

Since the writers of the only newspaper in town (?) are clearly insane, let’s put the paper away and find a place to build.  We’re looking for someplace flat.  Building on hills and mountains is difficult, expensive, and a pain in the ass. 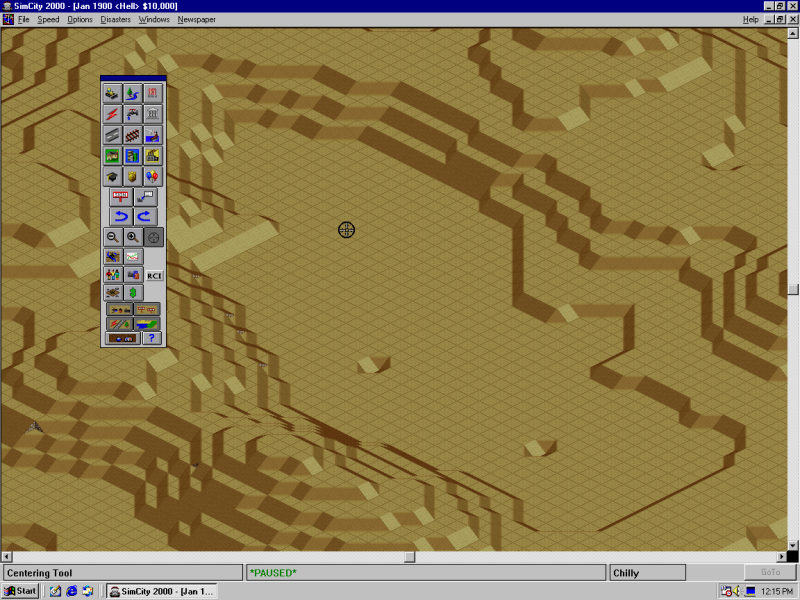 Let’s pick this nice valley in the center of the map.  What better place to build a thriving metropolis than in a crater in the middle of a desert. 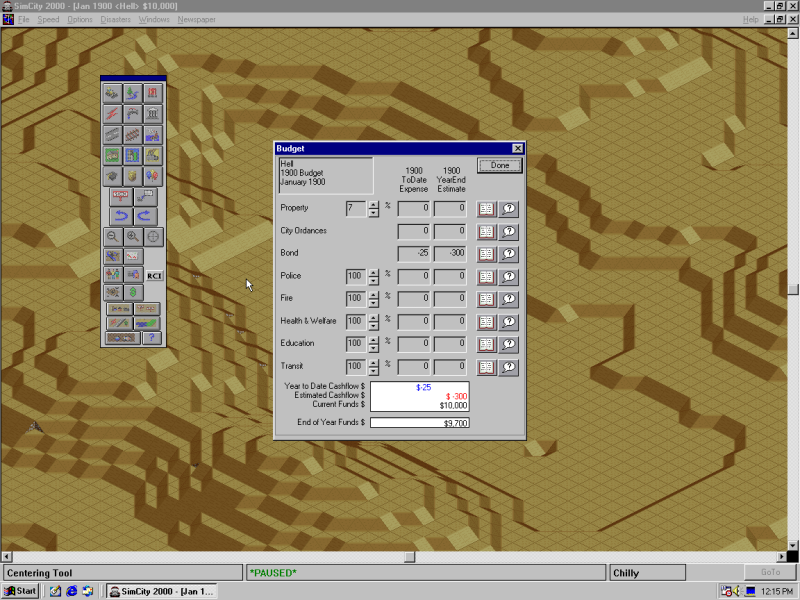 Before we start building, though, it would be a good idea to check on our finances.  We only have a $10,000 bond, after all, and we also have annual payments to make on it.  Since the interest rate is 3%, we’re on the hook for $300 a year.  Keep in mind that that $300 is merely the interest – it doesn’t count towards the principal, which in SimCity 2000 has to be paid off all at once.  So we’ll be making these interest payments for a while.
At the side of each line in the city budget, we can ask our advisors for their opinions. 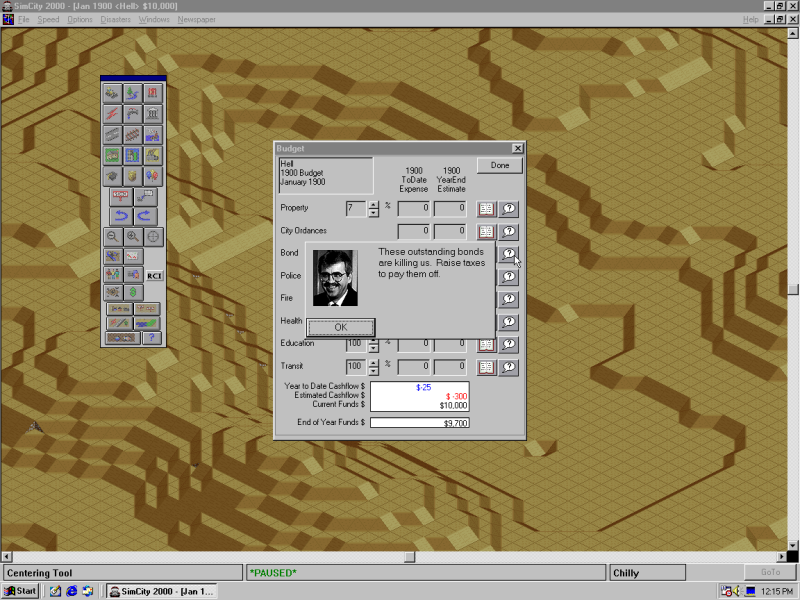 The bond advisor tells us to raise taxes (in the property tab at the top.)  That could work… if we had any taxpayers yet, which we don’t.  We’ll quickly learn that at least half of our advisors are morons and that the other half are assholes.  That’s politics for you, though. 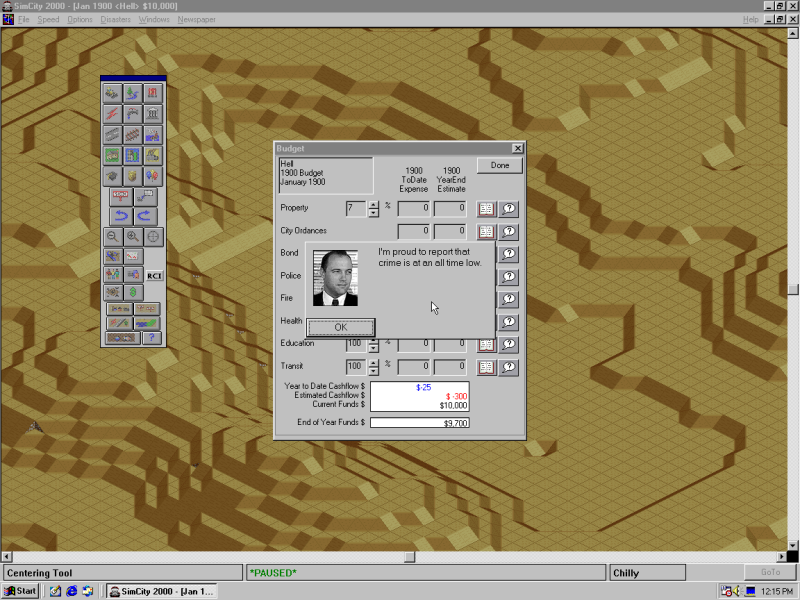 On the other hand, here’s some good news! 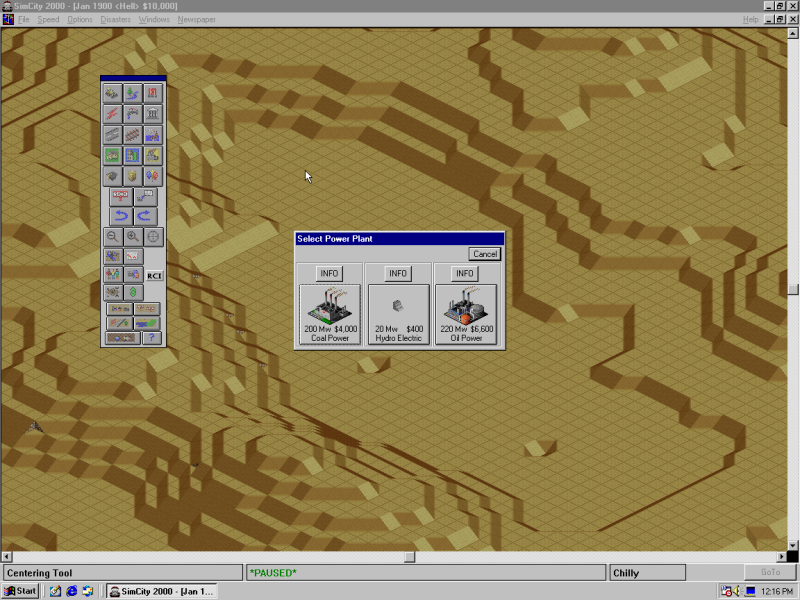 Okay, time to start doing something with that $10,000 bond.  If we just sit on it, we’ll lose money with no progress to show for it.  The first step is to select a power plant.  If we’d founded Hell at a later date, we would have a lot more options in this window, but in 1900 the only choices available are coal, hydroelectric, and oil power.
Oil power can be thrown out right off the bat.  It’s too expensive relative to the amount of power it provides, its only benefit being that it’s “marginally cleaner” than coal power.  That leaves the only other alternative hydroelectric power.  You might be thinking that it costs just as much as coal power megawatt for megawatt, and you’d be right – if Hell had any waterfalls to build dams on (or any water at all on its surface, which it doesn’t.)  As it is, each $400 dam will have to be built on a manmade waterfall, which costs $100 each to place.  Still a better deal than the oil power plant, but not by much.  The dams are also clean, but honestly – we don’t give a damn about having clean power in Hell, do we?  So let’s go with coal power. 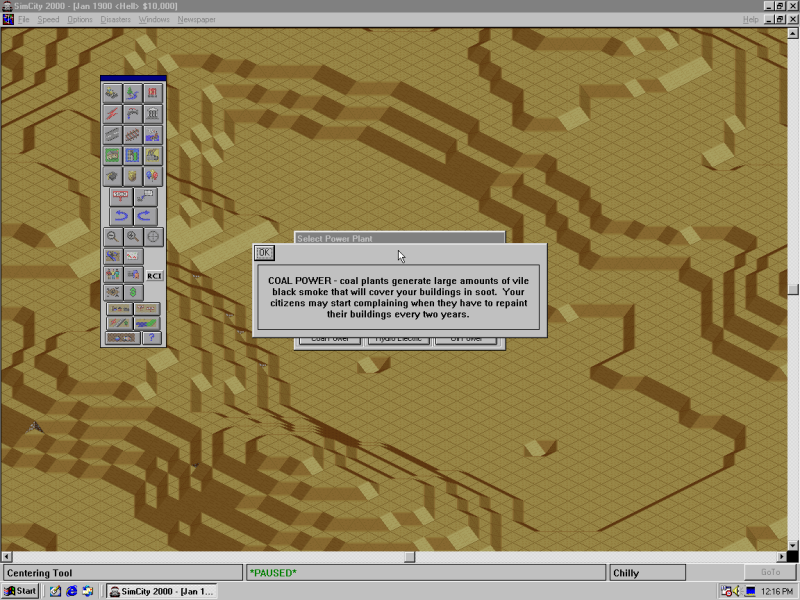 The citizens can complain about the pollution, and they will.  But they’ll still come to Hell all the same. 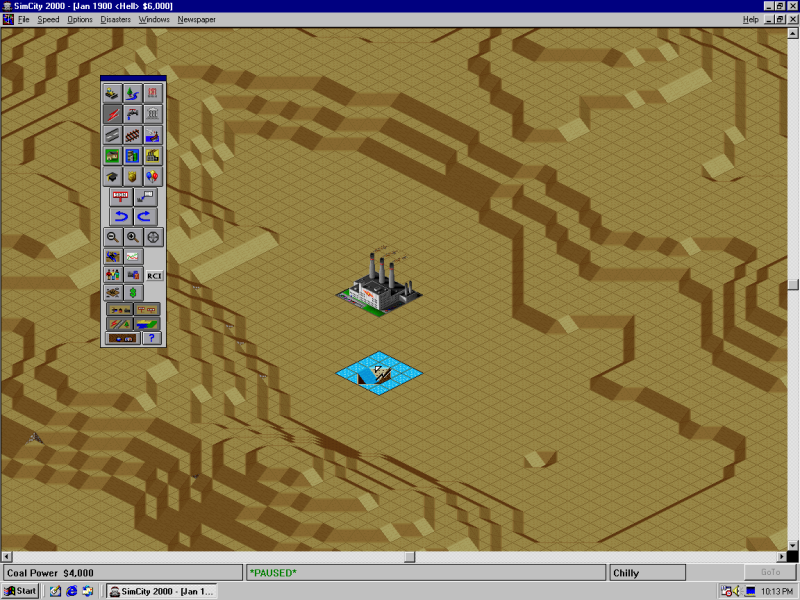 The plant is built!  It will have to be replaced in fifty years, but that’s a long way off.  And if we don’t have enough money in fifty years to spend $4,000 on a replacement plant, we’ll have failed either way.  We can always squeeze our population for taxes for a few years to cover the cost if necessary – once we have a population, anyway. 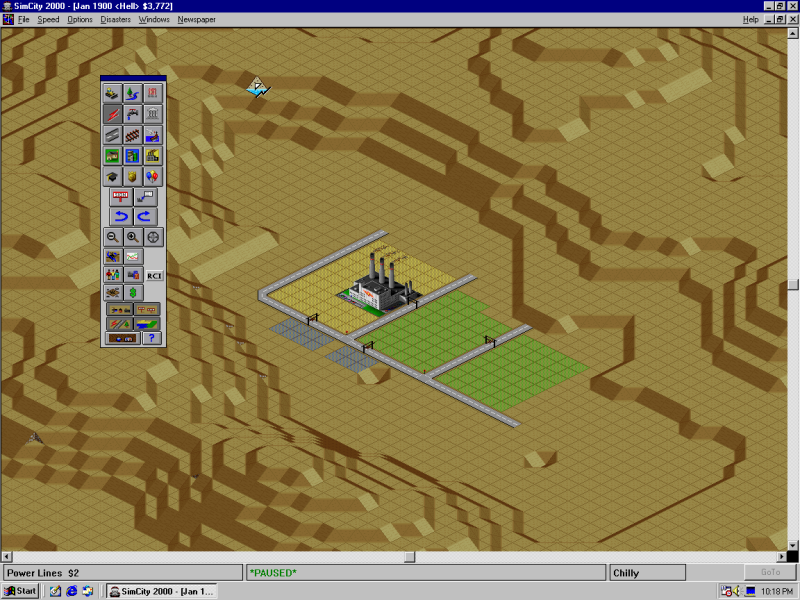 Our first task is to place industrial (yellow) zones, where Hell’s citizens will work, and residential (green) zones, where they’ll go to sleep and probably to drink and fight in the streets as well.  People usually advise placing these two types of zones far apart because of the heavy pollution that industrial zones produce.  But since we’re building Hell, we don’t care about that.  People will still move in, trust me.
Finally, a few commercial (supposedly blue, but really looks more like purple) zones, where our people can buy their cheap goods made in Asian sweatshops and their horrible processed foodstuffs and instant ramen cups, because that’s all anyone is selling in Hell. 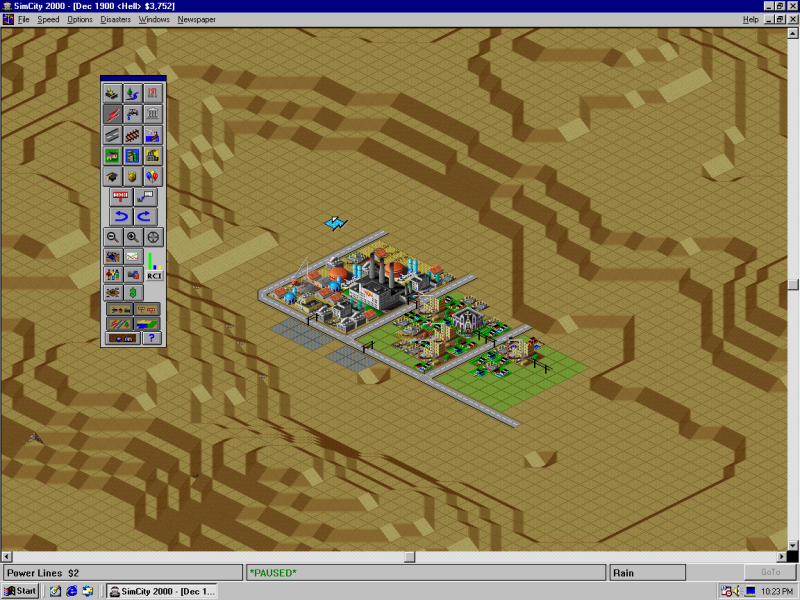 The people are moving in!  There aren’t quite enough of them to make up the gap in the budget caused by the annual interest payments, but we’re getting there.  Once we’re making money, we’ll be on the road to success. 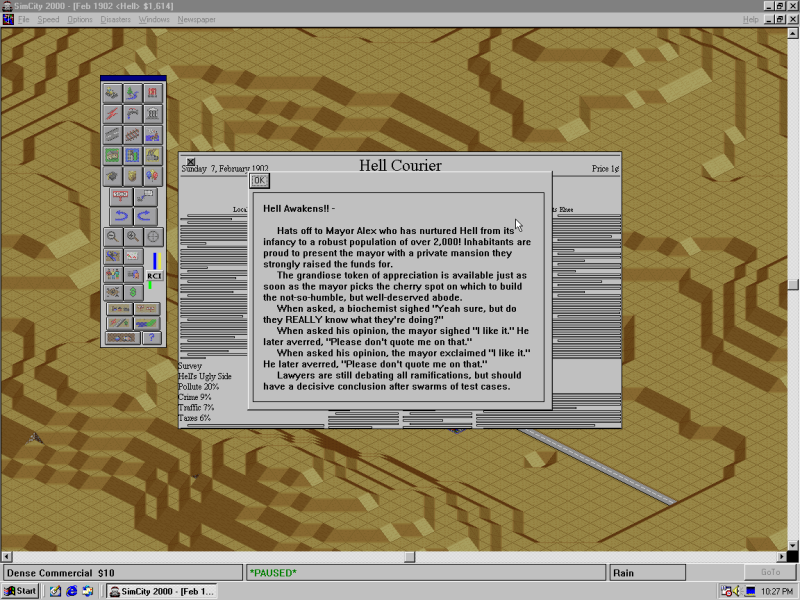 The Hell Courier, two years after its city’s founding, proudly trumpets “Hell Awakens!!” when the city’s population hits 2,000 and when I get a free mansion to build thanks to my grateful population.

Unfortunately, we’ll have to spend a lot more money before we can make it.  We’re exclusively placing dense zones (which support a whole lot more citizens per tile but are also more expensive than light zones.)   We’ve also had to build a police station and a fire station, which cost a lot of money and also require an annual payment to maintain.  This is a hard price to pay at the moment, but going without police or fire services means that in the event of an emergency, we’ll only be able to call up the national guard.  And they’re not very good at quelling riots or stomping out fires.  Unless we want to see our city pillaged by angry citizens (likely, under the circumstances) or burned to the ground, we need to drop $$$ on these essential services. 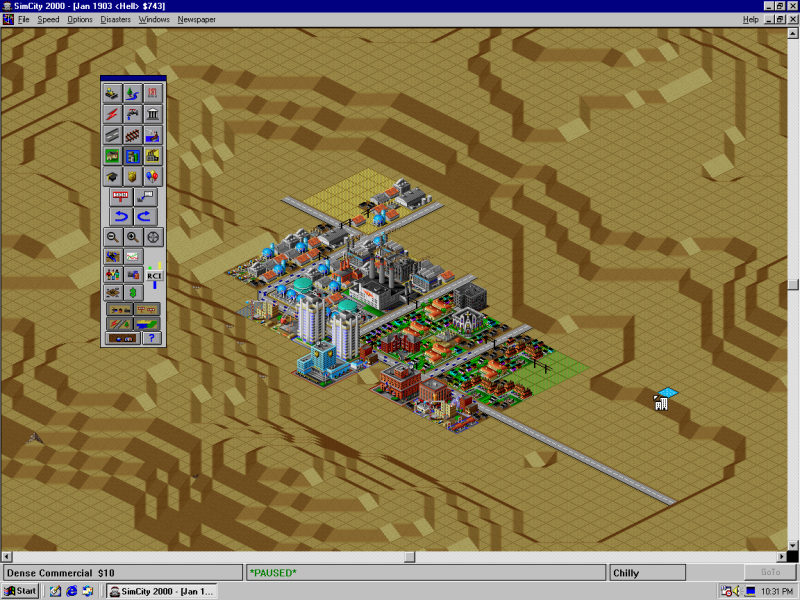 You know what we don’t need to drop money on, though?  Hospitals and schools.  Our citizens don’t need good health or education to work in dollar stores or toil in factories.
Maybe it’s not quite time to build our complimentary mayor’s mansion just yet.  We don’t want the masses overtaking his house and killing him in his sleep over his horrible mismanagement that easily. 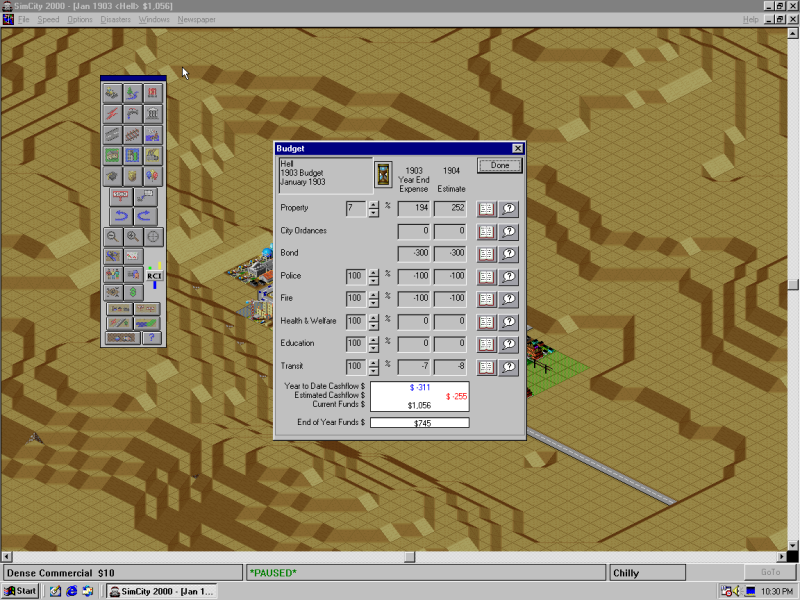 A quick glance at the 1903 budget sheet also reveals that we’re about to run out of money.  Fortunately, the mayor has a plan prepared just in case things really go badly. It involves getting into his ’83 Trans Am and driving out of town at midnight.

Maybe a few city ordinances can help us close the budget gap.  What does the ordinance advisor suggest? 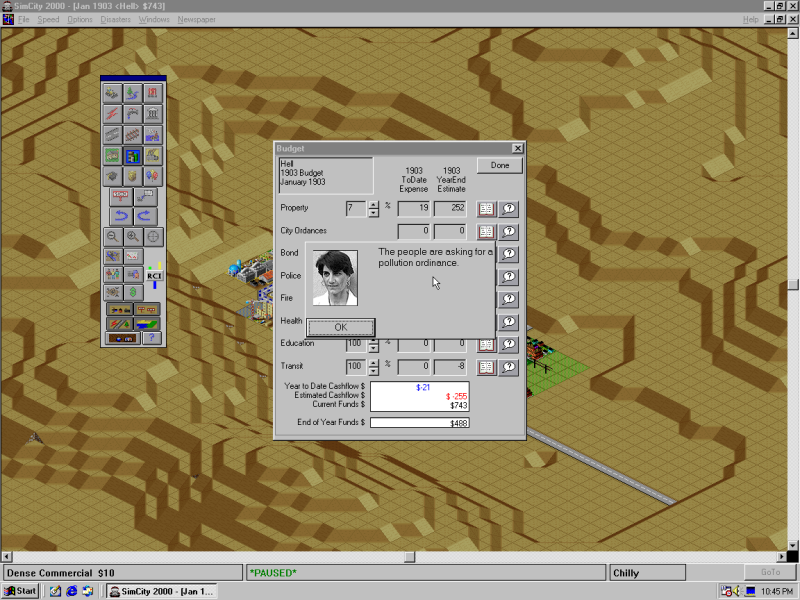 Are they now?  Let’s see what that will cost. 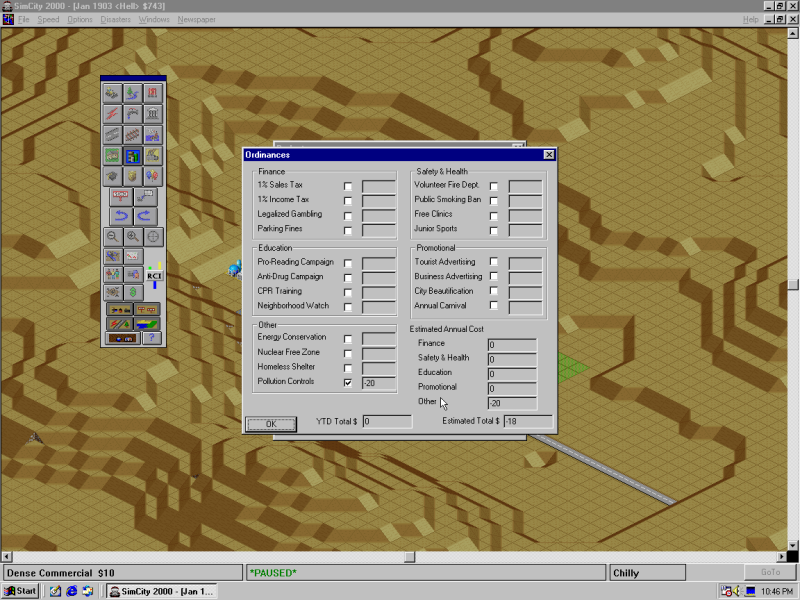 The people can go to… well, they’re already there.  In any case, no to pollution controls.  I’m trying to save money for God’s sake. 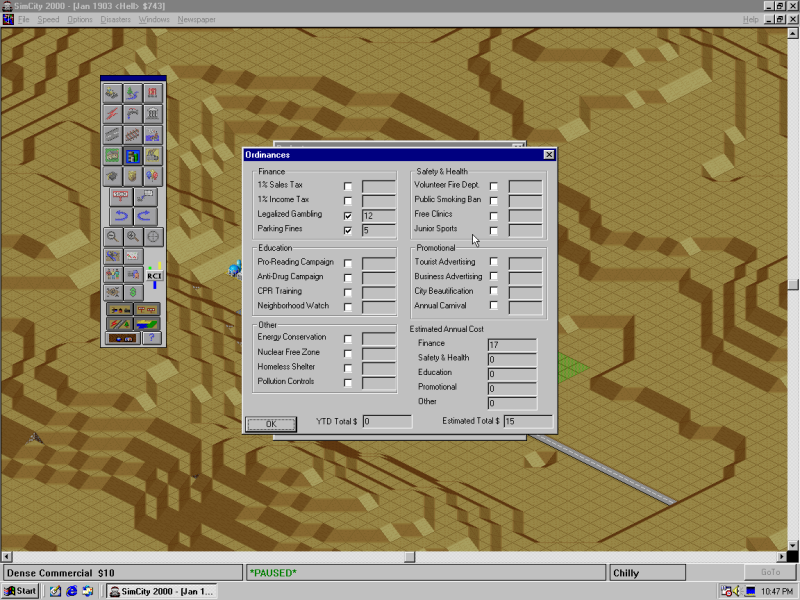 These two should help a bit.  If we legalize gambling, we can open casinos, get the gamblers drunk on cheap drinks, and then give them parking fines the next day for improperly parking overnight after they pass out.  In all, this excellent plan only generates $15 a year, but that’s fifteen dollars closer to paying off the city’s debt.

Time will tell whether Hell has to take out more debt to survive, or whether it will be able to stand on its own feet soon.  For now, though, the mayor retires to his improvised apartment in an old Motel 6 (since we haven’t built the Mayor’s House gift for reaching 2,000 people yet.)