Note: I just realized that none of this post makes any sense unless you’ve played Persona 3 already. So maybe don’t bother reading this unless you have. And you should, because Persona 3 is a good game (albeit incredibly long. I hope you have free time.)

Persona 3 Portable is a title I’ve been interested in for a while. In 2006/7, I ran through Persona 3, and about a year later I played the expanded “director’s cut” Persona 3 FES, and then I was sick of anything Persona-related (until Persona 4 came out, of course.) It’s 2015 now, though, Persona 5 is finally on its way, and there was recently a sale on P3P in the Playstation store, so what better time to look back at the series’ past? Also, it was on sale for five dollars.

If you’ve played either console version of P3, P3P does offer some new material. The most striking aspect of P3P is the choice it offers between the original male protagonist and a new female protagonist, opening up most of the main male cast to P3’s dating game. It also throws in a few completely new characters for the lady protagonist to interact with. A few things about P3P strike me as interesting, in fact. Here they are. 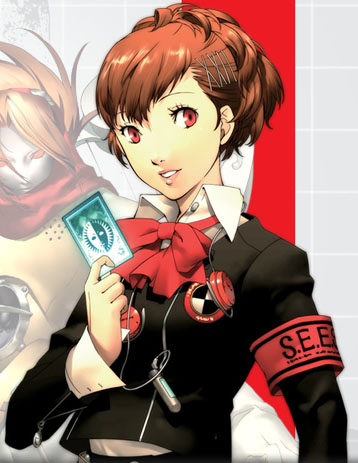 The female player character’s hairclip (hairbands? whatever) isn’t something most people would look at twice. I certainly didn’t think about it at first. But there is something significant about it: it’s a mark of her identity. It takes the form of two X’s and two straight lines. Unless I’m crazy, I would say it looks just like the Roman numeral XXII.

The reason this jumped out at me was the tarot. Anyone who knows even two sentences of information about the Persona series knows that the tarot is one of its key themes, even going back as far as the old Persona games on the Playstation. And as Igor tells you near the beginning of P3, you, the player character, are 0, “The Fool”, the card that represents infinite possibilities (or something.) If you take a closer look at the tarot, however, you’ll find that The Fool is categorized both as Arcana 0 and Arcana XXII. Thus, the female protagonist’s XXII hairclip/band thing. There’s no way in hell it’s a coincidence, and it’s just one of the subtle details the artist/character designer quietly slipped into the game. I think this is pretty cool. 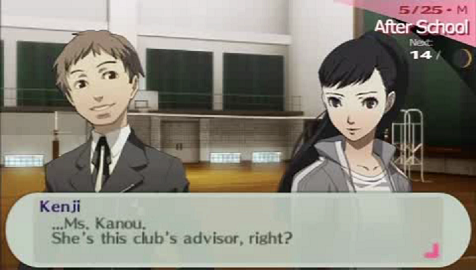 If you played P3 vanilla or P3 FES, you should absolutely play as the girl first. Not just to fulfill your inner dream of pretending to be a schoolgirl (as was the case for me, obviously) but because the female protagonist’s social links are in part different from the male protagonist’s. Most of the links seem to be with the same characters, but much of the contents of the links are different because of the player character’s opposite sex. Yukari’s link is a good example of this: while she’s initially a little removed from the hero, she’s much more open towards the heroine from the very beginning.

P3P does feature a few brand new links, though, and they dovetail nicely with the existing ones. Rio, for example, is the captain of the tennis/volleyball team (the only female sports teams at the school, apparently) with a longing for one of the male protagonist’s social link friends. Even characters who were talked about but never had lines in the old P3 make an appearance in the course of these new social links. And, of course, you can now date the dudes. (Unfortunately, you can’t really date the girls as a girl – no same-sex relations in the world of Persona.) These new social links, and the additions to the old ones, help make P3P feel like a fresh experience. They also make me remember how unlikeable some of those characters were, like creepy fuck Kenji shown above, or like main cast character Yukari, who honestly is annoying (but entirely realistic!) in parts.

3) Your teachers are still incompetent

One of the common threads running through P3 and P4 (and P5?) are the goofy teachers. Who can forget the extremely crabby Japanese-with-a-New-York-accent Mr. Morooka, or the slutty mature lady teacher Ms. Kashiwagi, who came pretty close to showing her cooch to the entire class on her very first day? Even the less central teachers get weird personalities, though, and P3P continues that trend. The greatest standouts here have to be the math teacher who can’t seem to do math problems without getting three wildly different answers, and the Japanese history teacher who can’t shut up about the Sengoku era and breezes over whole centuries-long time periods in a couple of minutes because he only wants to talk about samurai and bushido and all that stuff. I’ve worked as a history teacher, and I can tell you that if I had skipped over 3000 years of world history just to spend three weeks on the Mongol conquests, I’d have been kicked out of my teaching position on my ass. It’s a wonder that P3’s Gekkoukan High and P4’s Yasoinaba High keep hiring these dipshit teachers – only a few stand out as competent. Oh well, they’re good comic relief.

4) There’s a Ken Amada social link now, and it gets weird

If you played either P3 on the PS2, you probably remember Ken Amada. He’s the little kid of the P3 team. There are spoilerish reasons for why an elementary school student is on your high school shadow monster battle squad, so I won’t go into them. The important point here is that Ken is a little kid. Mature for his age, sure, but he’s still 10 according to Atlus.

So it’s kind of weird that you, as the female protagonist, can date Ken in your social link with him. You could argue that’s not quite what you’re doing, but you totally are. Nothing illegal is suggested, but the real litmus test in my opinion is whether the same scenario presented in this social link would have worked if the characters’ sexes had been reversed. My guess is that Atlus would have removed that social link the fuck out of the game as quickly as possible.

The Persona games seem to be unique among the Shin Megami Tensei family for featuring a small degree of fanservice. These bits of fanservice usually sit out of the way of the normal course of the game (i.e. you need to do a sidequest or fulfill a certain condition to get the fanservice in question) and they aren’t featured in the plain vanilla versions of P3 and P4. In P3P, though, the fanservice is compounded by the fact that you can now play as a girl and run around Tartarus in a bikini, the same one you wear on the summer vacation part of the game. FES let you do this with Yukari and Mitsuru, and their beach outfits remain in this version of the game. You can also dress up all three in fantasy-style bikini armor, which is prominently featured in Tartarus early on in glowing yellow chests. Of course, I had to use this armor, because it was the best around at the time. That extra 12 DEF is vital, you know.

Okay, so maybe the fanservice isn’t all that surprising, but I wonder about the point of it. If you want the beachwear, you have to pay out the ass for it, like 300K each. It is fun to listen to Yukari complain about being forced to wear a bikini in battle when you talk to her, I guess, but that’s about it. To P3P’s credit, it also offers bathing suits for the male characters to wear in battle, so you can’t accuse Atlus of being misogynist. Though I’m sure the multitudes of Tumblr users somehow found a way to do so.

Anyway, P3P is worth playing, even if you’ve played P3 already. You’ll have to find some way to spend the time until Persona 5 comes out, after all.