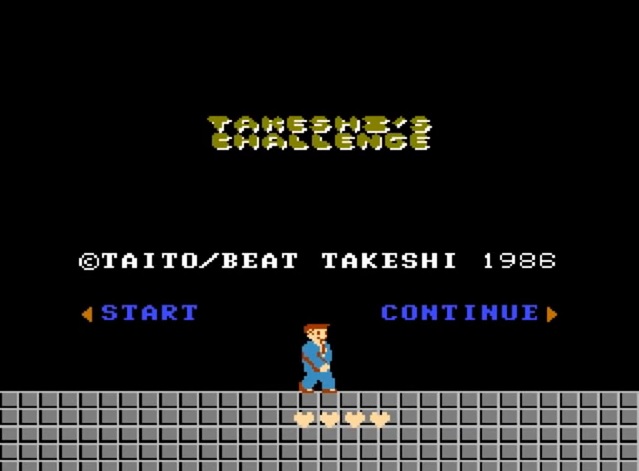 If you’re reading this, you probably already know about Takeshi’s Challenge. Never released in the West, this Famicom title is notorious in its home country for being an obtuse, ridiculous game that shits on the player every possible chance it gets. This game isn’t just hard – it’s practically impossible to play without having a walkthrough, because progression requires the player to simply know exactly what to do without any hints whatsoever, and many of the “right” choices make no sense at all. Takeshi’s Challenge is famous for its badness. Its infamy has even spread somewhat to the rest of the world thanks to Youtube let’s plays and video game shows.

That “Beat Takeshi” printed next to Taito on the title screen is not a game developer. The point of this game is that it’s a vehicle for then-and-still-famous comedian/writer/actor/director/etc. “Beat” Takeshi Kitano. Kitano is best known in the States for Takeshi’s Castle, aired in America on Spike TV as Most Extreme Elimination Challenge, that Japanese game show where contestants run through silly obstacle courses, but Kitano’s real reputation seems to lie in his old comedy act, his violent cop/gangster movies, and his later, more artsy works. As it happens, understanding Kitano, a guy with a sarcastic streak and a weird sense of humor, is important to understanding just why Takeshi’s Challenge is the way it is. It’s my opinion that Takeshi’s Challenge is not a bad game. No, in fact, it’s a masterpiece that tries to teach its player valuable lessons about life. Thankfully, someone who recognized this game’s greatness did an unofficial localization of Takeshi’s Challenge into English so that we’d all be able to enjoy it.

If you consider “PUNCH YOUR MANAGER” a viable option while at work, I’d consider getting a new job.

You play as Nameless Salaryman and start the game at your company’s office. You might think you play as Takeshi himself because of the game’s title, and that’s possible, but the game never names the protagonist, and it’s just as likely that the true meaning of the title Takeshi’s Challenge is that Takeshi himself is challenging you, the player, to complete his game. This will become clearer as the game progresses.

Mr. Salaryman works at a loan company and his sales are down, as emphasized by his manager when you first talk to him and by a big chart in the other room that says “SALES” with a red line sloping down. Here the game presents you with your first choice: you must SIGN RESIGNATION. The manager, despite his earlier scolding, pleasantly thanks you for your service and offers you an extra bonus as a parting gift. Maybe he’s just happy to be rid of you. Whatever the case, this is the first in a series of several brash actions that you must take to win the game.

So you’ve quit your job. What’s your next destination? Obviously it’s the bar. Time to get wasted! 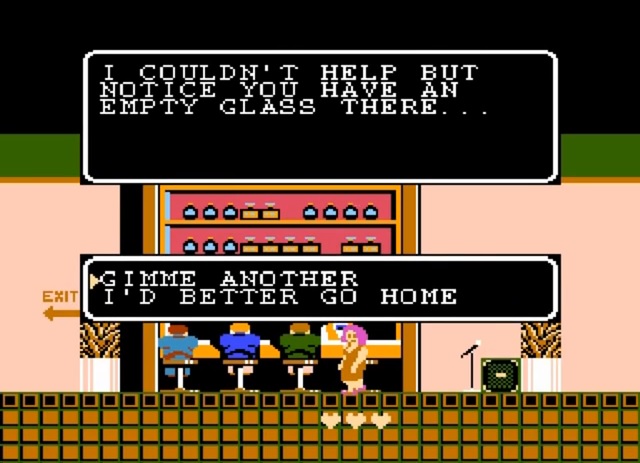 In America, Nintendo did its best to remove all adult themes from its releases. In Japan, Nintendo allowed children to get black-out drunk and punch people.

Correct decision #2: leave your office and drown your worries in LIQUOR. Ignore the karaoke machine in the corner (but just for now!) Drink until you black out. Yes, really. Did I mention this game was meant for children? Back in the 80s, kids were the great majority of the video game-playing populace. Thanks for the great life lessons here, Mr. Kitano. 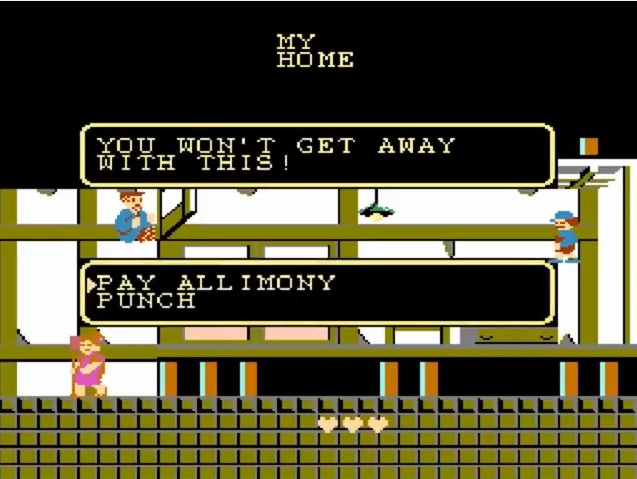 Just when you thought it couldn’t get any better.

After blacking out (quite literally: after several drinks the world goes black) you wake up in your large square house. Your wife is scolding you for being drunk yet again. At this point, you face option #3, and out of a series of choices, the correct one is “I WANT A DIVORCE”. To appease your wife, you should then “PAY ALLIMONY” (sic). Your wife seems happy enough to take most of the money on you, but she’ll still punch you for being drunk, so leave your house right after. Ignore your kid, but I’m sure the protagonist has already been ignoring him for a while now.

It’s here that the first truth of Takeshi’s Challenge emerges: to start a new life, you must destroy all links to your old one. You must quit your job and divorce your wife. Also, you should be drunk as often as possible. All I can say is that I’ve done most of these things, and I likely would have divorced my wife by now if I’d ever been married in the first place. So I don’t personally need this lesson, but it’s surely helpful to other, less enlightened players.

Since you’re now just about broke, still drunk, and without a home, you should go back to the bar. Oh yeah, at some point in this mess, you should have gone to the “Culture Club” to learn to play the shamisen (a kind of Japanese lute.) Just one of those little things you’re required to do to win the game that you’re given no idea about.

Once you’re at the bar, have two drinks to work up enough courage to sing karaoke. There’s exactly one song out of the 20 or so listed that the customers actually want to hear, though again, the game will not tell you this. You must sing this song three times (you can tap A along with the music, though the game was designed to be sung into – the Famicom had a microphone attachment. And this was in the 80s!) Assuming the other drunk people liked your singing, a bunch of green-haired dudes enter (I think they’re meant to be yakuza guys, at least since this is a Takeshi Kitano game) who you have to beat up. Then an old man approaches you and gives you a blank map that he wants you to decipher (because you were so good at singing and beating up thugs? All right, sure.) Out of your current options, you should expose the map to the sun. Then, leave the game sitting for one whole hour. Go have lunch or something. Go outside for a while. Not in the game, in real life.

This is the game’s second lesson: good things come to those who wait. In this case, hitting any button before an hour is up “ruins” the map, and your game is over. More importantly, though, the game is teaching us that games are stupid, and that you should get your ass outside for a while. Like, right now.

Once the hour is up, the blank map somehow turns into a crude map of an archipelago. This is your path to the treasure that is your end goal (again, the game has not really said anything at this point about finding a treasure, but finding it is indeed the winning condition.) Before you leave the bar, though, beat up the old man who gave you the map. 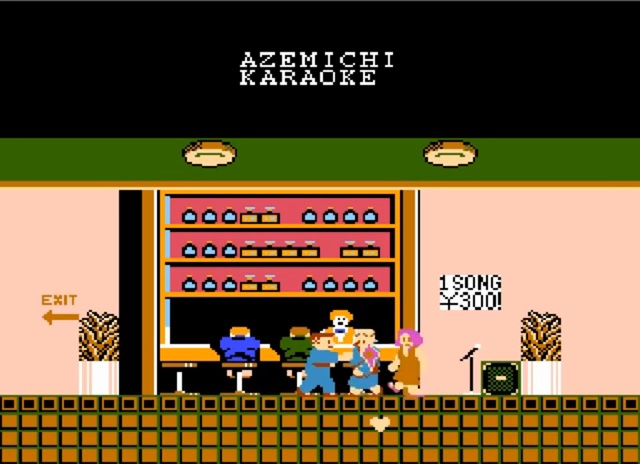 What’s the meaning of this betrayal? This sequence reveals the game’s third lesson: you can’t trust anyone, especially old guys who give you treasure maps. If you don’t beat up the old man, he will pop up when you finally somehow find the treasure at the end of the game and beat you up, taking it all for himself. Of course, this is the ultimate dick move, because once again the game gives you no indication of the old man’s intentions. In Takeshi’s Challenge, the correct choice is often the most ruthless one, and only the player with the foresight to take care of his only rival for the treasure will succeed.

After this you have to buy a plane ticket and fly to the archipelago, though you must first win a shamisen by losing at pachinko and beating up the yakuza who enter the parlor to fight you for no reason (because they’re loaded with pachinko balls that you can steal and turn in to the pachinko lady for a prize.) If you fail to do any one of the required tasks before leaving your hometown for your new treasure-hunting life, the plane you’re riding blows up on the way there. Yeah, it just blows up. The game briefly wonders “WAS THAT A TERRORIST ACT?” before kicking you to the title screen.

Assuming you avoid this bizarre bad end, the game goes on like this with similarly incomprehensible island adventures and frustrations until you finally find the treasure.

The only video game in history where strangers get upset when you barge into their houses uninvited.

Here you get the final screen where, if you wait long enough (say, for a credits sequence) an 8-bit Takeshi Kitano will tell you to stop taking this game so seriously and get a damn life.

You sure told us, Mr. Kitano!

Did I mention that Kitano is on record as hating video games? This is another key to unlocking the puzzle that is Takeshi’s Challenge. Legend has it (or Gamecenter CX has it, anyway) that the development team sat down with Kitano sometime in the mid-80s at a restaurant and talked to him about the game. Meanwhile Kitano, who knew nothing about video games, gave the Taito guys all kinds of ideas for what they should put into the game. All the while, Mr. Kitano was allegedly getting drunker and drunker on sake. This may well explain some of the more ridiculous or insane aspects of Takeshi’s Challenge. 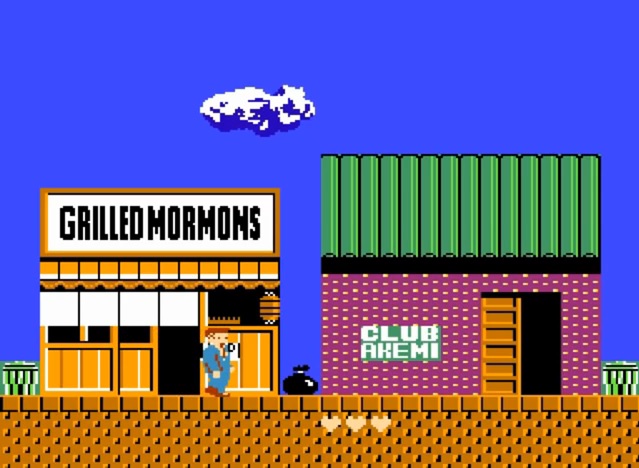 For really good grilled Mormons, you have to go to Utah.

Still, despite Mr. Kitano’s disdain of games and his probable intent here to simply play a big practical joke on the children of Japan, I think his game has some value. It’s almost a proto-GTA: you can punch anyone and run around being a belligerent asshole, and Takeshi almost encourages you to engage in these kinds of dangerous anti-social behaviors. If it had been released this year on Steam for five dollars, people would probably think of it not as a terrible game, but as a kind of surreal exploration of the world of the aimless, alcoholic white collar worker. The game would stir up internet arguments about domestic violence and first world privilege.

All that from one drunken conversation over lunch. What an achievement!