I’m a big fan of Nippon Ichi Software. Their approach to the strategy RPG is unique, and their games have a light comedic quality that’s a real breath of fresh air in a genre that is choked with seriousness and end-of-the-world scenarios and angst-filled heroes (SRPGs as a whole aren’t as guilty of this sort of thing as more typical turn-based JRPG titles are, but they’ve got their fair share of DRAMA.)

NIS, a Japanese developer (if you couldn’t tell from their name – “Japan’s Best” I think it means?) started out getting notoriety with the release of Marl Kingdom for the Playstation. I’ve never played Marl Kingdom, but it is apparently an RPG about a teenage girl in a fairytale land with a puppet girl as her best friend and is full of Disneyesque musical numbers. For a reason that is totally impossible to understand, this game was stamped with the title Rhapsody: A Musical Adventure and imported to the US, where I’m pretty sure 98% of Playstation owners at the time were teenage boys who wouldn’t be caught dead with such a game in their Playstations (well, I know because I was one of them.) So the game flopped Stateside. NIS followed up with the SRPG La Pucelle Tactics for the PS2, which I have played, and it really tones down the pure unadulterated cheese of Marl Kingdom. You play as a tomboy nun-in-training who’s also a member of an elite demon-hunting team. So that’s different right there. 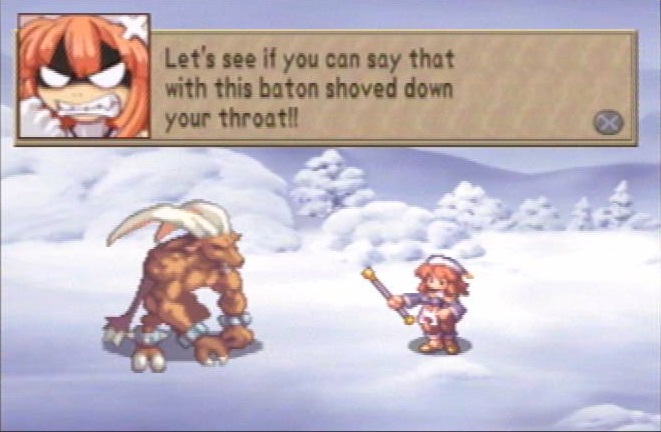 It’s still a pretty obscure game here, but La Pucelle must have been a relative success in the States, because big-time developer and publisher Atlus took a chance on 2003’s Disgaea and published it in the US. And Disgaea was definitely a hit – it would become the first title in a long line of sequels, spinoffs and ports to portable systems.

So what is Disgaea exactly? For the novice, imagine an SRPG – say a Fire Emblem or Shining Force game – with soldier and mage sort of characters moving around on a grid and attacking each other. Now replace these soldiers and mages with demons and monsters that have 500,000 HP, 300,000 MP and attacks that can bring down meteors and giant lasers upon their opponents. Every turn. Also, exploding penguins. That’s Disgaea.

Step 1: Become the Overlord of the Netherworld. Step 2: Laugh menacingly inside your huge castle.

Disgaea tells the story of Laharl, the son of the king of the Netherworld, who unbeknownst to him has been dead for two years (because Laharl has been taking a two-year nap, you see.) Laharl, who now believes himself to have inherited the title of Overlord from his dead father, decides to show all his new vassals that he means business. Sadly for him, nobody seems to accept this kid as their new king, so he’ll have to use some force to get his subjects to obey him.

Laharl doesn’t get much respect initially, no.

Even worse, an angelic assassin has been sent from Celestia to kill him. Fortunately for Laharl, she’s new to the job and doesn’t really know what she’s doing (see top of page.) Together with his “loyal” vassal, Etna, the three of them end up having wacky Netherworld antics together. Or something. It’s definitely a nice story, and in 2003 Disgaea stood out for its humor where most other games in the genre were deadly serious. Juvenile jokes are mixed up with references to the Power Rangers (or old sentai shows if you’re from Japan) and 50s sci-fi serial Buck Rogers-type stuff. It’s a weird mix, to be sure, and it could be dismissed as a lot of pointless goofiness, but I think it works.

Gameplay-wise, as good for its time as La Pucelle was, Disgaea outdid it in every category. Disgaea is more or less divided into two parts: the initial game, which covers the main story, and the post-game, which is totally optional and can potentially go on forever if you let it. The core of the gameplay should be familiar to anyone who’s touched an SRPG before. You have your units and move them around on a map divided into squares on a big diagonal grid. The object of each map is usually to kill all the enemy units, though there are also maps where the goal is to reach a particular space on the map.

Disgaea has a lot more to offer than its regular missions, though – specifically two innovations that have become a staple of the series. The Dark Assembly (or the Dark Senate) is the first. Here, you can choose one of your characters to present a “bill” to an assembly of other demons who will vote on it. Subjects for debate include opening up new post-game areas, getting triple exp on the next map played, and even extorting money from the senators. If your bill fails, you even have the option of forcing it through – by beating up all the nay-voting senators in the assembly.

Like this, but with more swords and magic spells.

The second innovation in Disgaea is the Item World. The Item World is a truly devilish gameplay element. It allows you to level up any item in the game by playing through a succession of maps “inside” that item (it’s weird, I know.) Most items contain 30 levels, but some have 60 and some 100. Each level is designed to be beatable but is otherwise more or less randomly generated. The Item World is infuriatingly addictive and may well comprise the part of Disgaea you spend the most time playing. An actual Item World level. They’re usually not this easy, believe me.

Together with the ability to create new units from dozens of different character types and classes that can fight alongside the story characters, Disgaea offered an insane amount of customization and depth when it came out. I played the hell out of it and loved every minute, and that’s why I’m now an NIS fanboy. Not the proudest of badges to wear, but I will wear it all the same.

Disgaea has spawned three sequels featuring different casts and stories (Disgaea 2, 3 and 4), a direct sequel featuring the original cast (Disgaea D2), a bunch of SRPG spinoffs with different stories and different gameplay mechanics (Makai Kingdom, Phantom Brave, Soul Nomad and the World Eaters), a couple of stupidly difficult PSP platformers (Prinny 1 and 2), a weird visual novel sort of thing (Disgaea Infinite), a sort of crappy looking anime adaptation, and a truckload of portable system ports for the PSP, the Vita, and the DS (basically one for every Disgaea game and then some.) It also inspired this cross-stitch of one of its main characters, Etna:

To be honest, later Disgaea games have really improved on the old formula, especially the third one; Disgaea 3 is a great title that I like about as much as the original. Still, the original is the original and should get some respect. The original Disgaea is currently out in its PS2 original and as a port to the DS and the PSP. Of the two ports, the PSP one is definitely better, though the DS port has a couple of extras that fans might like (like the opportunity to get fan favorite silent girl Pleinair as a playable character.)

Pleinair doesn’t talk. That’s her thing. She has a sentient stuffed rabbit toy that sometimes talks for her. No, I don’t get it.

So if you’re unemployed and need something to do between searching for jobs, or you’re in solitary confinement for life and somehow get to have a PSP or Vita in your cell with you, I highly recommend Disgaea. I’d also recommend Disgaea 3, which is just as good cast-wise and has tons more content (and also looks prettier, being a PS3 game.) You can’t really go wrong with either one. The only danger involved is that you’ll become an NIS fanboy/girl, which is not really a fate I can recommend. Well, better than being a brony, I guess.