The Dreamcast had a sadly short life, doomed as it was to be SEGA’s last shot effort at staying in the console-making game. Unlike its disastrous predecessor Saturn, however, the Dreamcast is still more or less beloved among a lot of gamers now in their 20s. Maybe it’s because everyone knew it was SEGA’s last shot, or because some of its games were actually pretty good.

Grandia II was one of these. Released in 2000, Grandia II was in many ways a typical JRPG – lots of battles, boss fights, traveling, dialogue, dialogue, dialogue, and all in the context of an epic quest to save the world. Your hero is Ryudo, a young mercenary who runs around the countryside looking for work with his pet (?) talking falcon (???) Skye (no, the game never explains this. Especially confusing because Skye is the only talking/intelligent animal in the game; the rest don’t say a word. Also, in the English dub Skye sounds like George Takei.) Ryudo is kind of a dick, and although Skye tries to keep him in line it doesn’t always work. 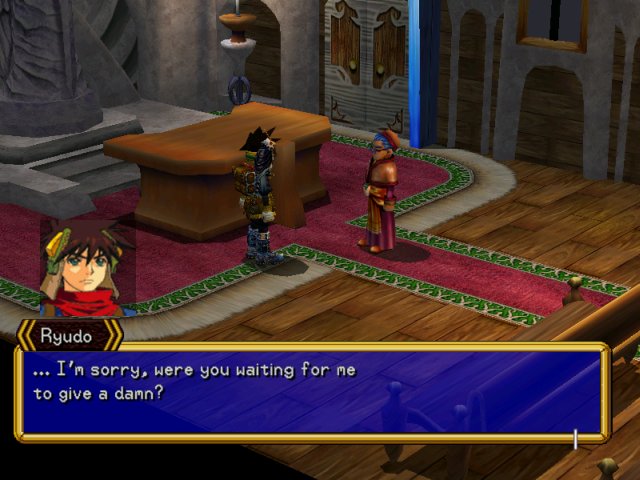 One of Ryudo’s many quips

The gist of Grandia II is that you, as Ryudo, have to take a job from the church that controls your country to seal an ancient evil together with a nun who is the key to sealing that evil, because of a reason I can’t remember. You travel to see the pope while meeting people who have serious problems you have to fix, after which a few of them will join your party as permanent members. ……..

Right, so in terms of setting, plot and basic character layout, it’s a generic JRPG. Painfully generic, and as stale as a week-old baguette. The hero is a jaded sarcastic guy, the main female lead is a nice girl who wants to help everybody. There’s also a kid, a warrior furry lion sort-of guy and a robot girl. And if you’ve played even a few JRPGs of this kind, you’ll see the plot twists coming several hours before they hit. Hell, you might be able to figure out everything that’s going on, all the way to the very end of the game, after finishing just about a third of it. Really, that’s not right at all. 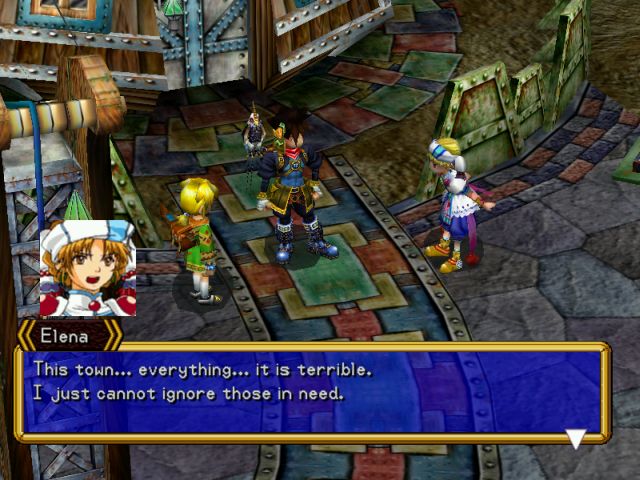 Despite that, Grandia II is a good game if only for its gameplay, and namely for its battle system. It’s a mix of turn-based and real-time battle. Each of your members has his or her turn along with each of the enemies. However, the order of everyone’s turns is determined by their speed stats and whether your party was able to catch the enemy off guard or was ambushed by the enemy. Each turn, represented by the character’s face, moves along the initiative bar to the blue COM threshold, where you can input a command for that character. Once they hit the ACT line, that character will carry out their inputted action. Both you and your enemies’ actions can be cancelled, however, if they’re attacked before carrying said action out. Getting canceled flings the affected actor’s icon way to the left (i.e. the beginning) of the initiative bar again.

Your characters also get a whole crapload of moves and spells to learn, some of which do various amounts of area damage. A few moves are great for canceling imminent enemy attacks. 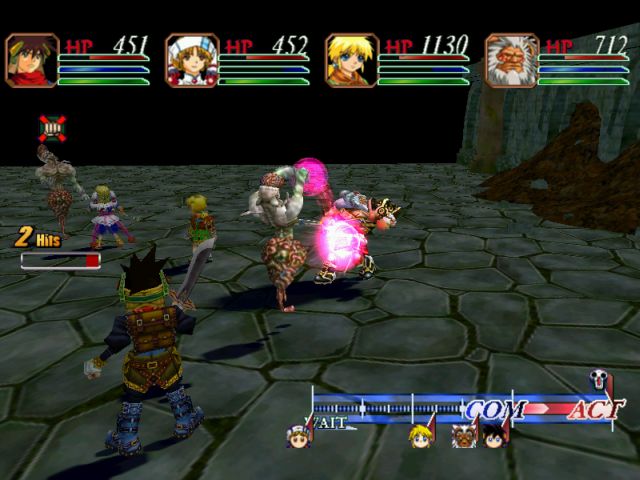 This system might sound complicated, but it’s really easy to pick up and a lot of fun once you’ve gotten the hang of it. Battles in Grandia II are a lot more than simple point-and-click or run-around-the-field-swinging-your-sword deals as they are in many other JRPGs, and that adds a lot of value to the game.

Another nice addition to Grandia II is this bit that comes up maybe six or eight times throughout the game where you get to sit in on a dinner conservation with your party. It’s not especially substantive or anything, but it adds some flavor to the game, and the characters’ interactions can be amusing sometimes. In fact, most of Grandia II‘s dialogue is pretty well-written, even in the context of its stale plot. 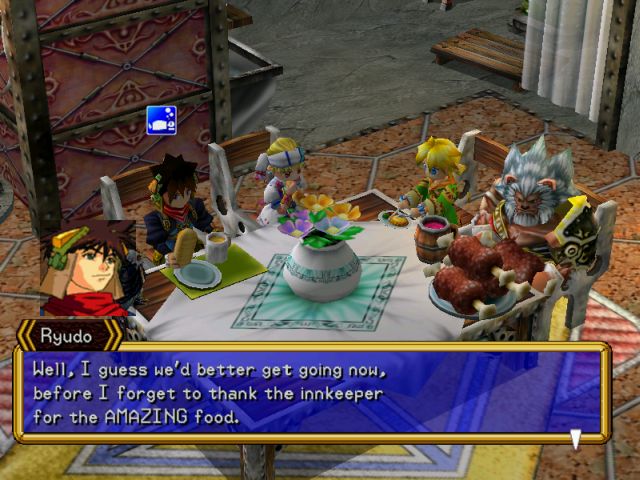 Is he being sarcastic? Who can tell.

Grandia II is a nice JRPG that’s well worth playing if you live in 2000 and own a Dreamcast. And though it hasn’t aged all that well, really, even today it’s fun. I played it a couple of times as a kid, and returning to the game, I can still enjoy it.

Sadly, it’s kind of hard to track down today in its original form – copies of the Dreamcast version are on sale for $150 on Amazon (it’s the same with Skies of Arcadia, actually – what is it with Dreamcast RPGs being expensive as hell now?) The PS2 version might be cheaper, though I’ve never played it – it could also be a horribly broken port for all I know. And the PC (!) version is probably damn near impossible to play on a Windows 7/8 machine. Still, if you can track this game down for a decent price, it’s well worth a play. I don’t know if it’s necessarily $150 worth of it, but it’s certainly worth something.