a.k.a. Mahjong Legend Akagi: The Genius Who Descended into the Darkness

I’m going to approach this series a little differently. Instead of writing a normal review of the show, I’m going to take you through the first episode. Why? Why not? I do have a reason for doing this, but it might not be apparent until the end of this post.

The first episode opens with a minute of background. The setting is late 1950s Tokyo. Japan is finally over its post-war slump and is starting to grow again.

This is all explained by the narrator. He talks constantly throughout the series, but he’s not obtrusive at all and in fact is often extremely necessary, so you’ll get used to him.

The story begins in a smoky hole-in-the-wall mahjong parlor. Four players sit around a table. Big deal, so they’re playing some mahjong. Nothing strange about that.

But this game is different. One of the players, Nangou, is deep in debt to the mob. Three of the other players are Yakuza guys. One of them, a local mob boss, has had his mistress take out a life insurance policy on Nangou. You can see where this is going.

Since the Yakuza are nice guys, they let Nangou try to cut a path out of his debts by beating them in a mahjong match. Sadly for Nangou, it’s not going too well for him. He’s nearly out of points and is about to lose the game and his life. Nangou reaches into the wall of tiles to pull one, praying to anyone, even the Devil, to help him out of his predicament. At that very moment, the door to the parlor opens.

A kid (yeah, he is a kid, even if he doesn’t look like it) is at the door, seemingly looking for shelter from the driving rain outside. The Yakuza thugs try to throw him out, but Nangou tells them he called the kid to the parlor just in case he, you know, “went missing.” Of course, Nangou and this kid have never seen each other – Nangou just wants a break from the game to collect his nerves. Luckily for him, the kid plays along with his story.

After a few minutes, the game is back on. Nangou prepares to make a deal that he needs to complete to build his hand. However, he gets nervous, because that same tile is one that his main opponent (Ryuuzaki, the boss) might need to complete his hand. Nangou decides instead to deal a “safe” tile – a defensive rather than offensive move. After all, if he loses this hand, it’s quite literally all over for him.

He’s all set to make this defensive play when the boy sitting behind him speaks.

Nangou turns around and asks the kid what he’s talking about.

This kid admits to Nangou that he’s never played mahjong before, but that he could sense Nangou’s feeling of hopelessness. He tells Nangou that to survive, he’ll have to be aggressive – to take a risk. Nangou turns back to his hand and realizes that the kid is right. He returns to his original deal – and it passes! Nangou ends up completing his hand and winning on the next deal. His life – at least for now – is safe. (Incidentally, as the narrator explains, that “safe” tile deal would have completed a different player’s hand, meaning Nangou would have lost had he dealt it.)

The Yakuza guys, disappointed that they couldn’t finish Nangou off then and there, break again for a few minutes. In the meantime, Nangou questions this mysterious kid about his identity and what he’s doing hanging around a Yakuza mahjong parlor at midnight. The boy is 13 year-old Shigeru Akagi, but beyond that he says nothing. For the first time, Nangou notices something strange about Akagi: his clothes are covered in sand. He guesses (rightly, as we’ll soon learn) that Akagi came close to death that night.

How can Nangou tell? Because, as he explains to Akagi, he’s near death as well. Nangou then makes a request of Akagi. 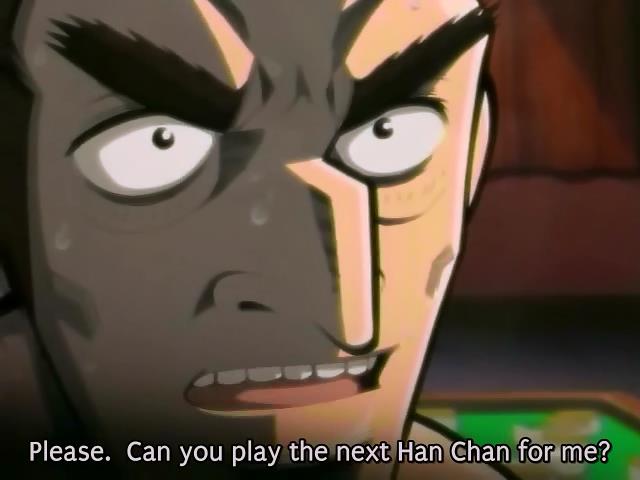 Nangou can sense something great in Akagi, something that Nangou himself doesn’t possess. Despite never having played mahjong before, Akagi agrees to sit in for Nangou and gets a five-minute primer on the basics of mahjong.

And we get to learn along with him!

When the game starts again, the Yakuza players have no idea what the hell is going on but they roll with it anyway, figuring that some kid will probably be even easier to beat in mahjong than Nangou. And they might be right.

Perhaps in a case of extreme beginner’s luck, Akagi’s very first hand is a monster: he has pairs of each dragon tile. A hand with three of each of these tiles (white, green and red, all on the left) is one of the biggest hands in the game – a dai san gen. It’s also one of the most difficult to get, because completing a dai san gen usually involves having to call someone else’s dragon tile when they deal it, and any hint of a dai san gen will cause the other players to act defensively and not deal dragons.

Still, Akagi will have to call those tiles to complete the hand. The first dragon is thrown out.

One by one, each of the other dragons are thrown out, and Akagi lets each one pass, completely wrecking his hand. Nangou starts cursing himself for letting this stupid kid take over his life-or-death mahjong game.

What the hell was Akagi thinking?

At that moment, there’s a knock on the door of the mahjong parlor. It’s a police officer. Turns out the police are looking for the survivor from a game of chicken that involved severe casualties.

Everyone in the room turns to Akagi, who says nothing. The Yakuza boss is duly impressed by Akagi’s guts and tells his henchman to shoo the policeman away. Akagi, however, knows that that’s not going down, because the cops followed him here on a lead and won’t let him go. So he decides to make a deal with Nangou.

Nangou is pretty miffed at this suggestion. This kid just let a monster hand get ruined and he wants me to help him? Nangou points out that Akagi needs something to offer him to make such a bold request. Akagi says he does have something to offer.

Suddenly Akagi’s hand has three of each dragon tile, where before it only had pairs. Akagi has a dai san gen one tile away from completion. At first, Nangou has no idea what the hell is going on, but then he realizes what Akagi has done: he used the Yakuza guys’ distraction in dealing with the policeman to covertly steal each of the dragon tiles he needed from the pond (the center of the table where players put their discarded tiles.) Now Akagi doesn’t have to call anyone’s tiles: he can win right away.

Not wanting to lose his shot at a huge win, Nangou agrees to provide Akagi with a cover story. A few seconds later, a detective barges into the room. 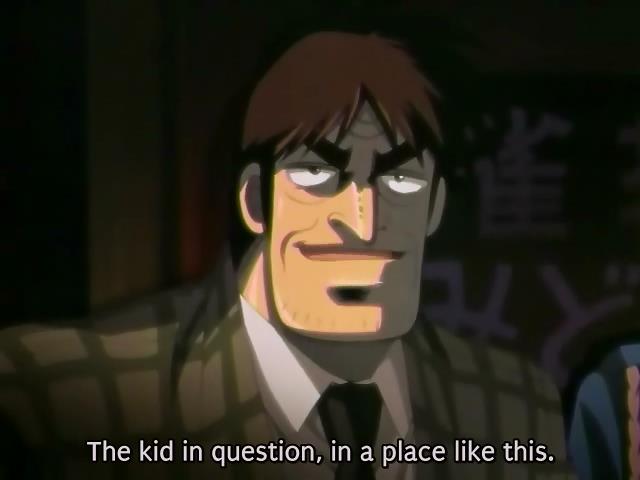 The detective pinpoints Akagi as the chicken survivor he’s looking for. Nangou, however, springs to action and covers for Akagi.

He claims Akagi has been in the parlor all night. Ryuuzaki and the other gangsters go along with Nangou’s story because they want the police to leave.

The detective isn’t buying this story, so he decides to hang around for a while. The Yakuza dudes at this point are distracted and pissed off that they couldn’t get rid of the cops, so Akagi reminds them that they’re in the middle of a round of mahjong and that they should get back to playing.

Still caught in a daze, they turn back to their game, and one of them immediately deals into Akagi’s dai san gen. Only too late do they notice that the pond is missing a few tiles. 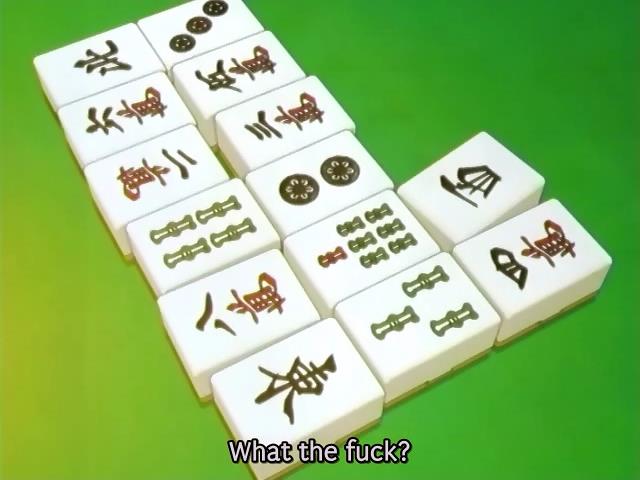 Ryuuzaki and his buddies would love to beat the shit out of Akagi right now, but they can’t – because the cops are in the room with them. As it happened, Akagi planned on this as well. So Ryuuzaki gives Akagi the dai san gen and lets him off with a warning.

The gangsters, now thoroughly pissed off, take yet another break and go into a back room. One suggests they call in their “rep player” – a guy whose sole job is to win mahjong matches for the mob. Ryuuzaki is offended by this suggestion. 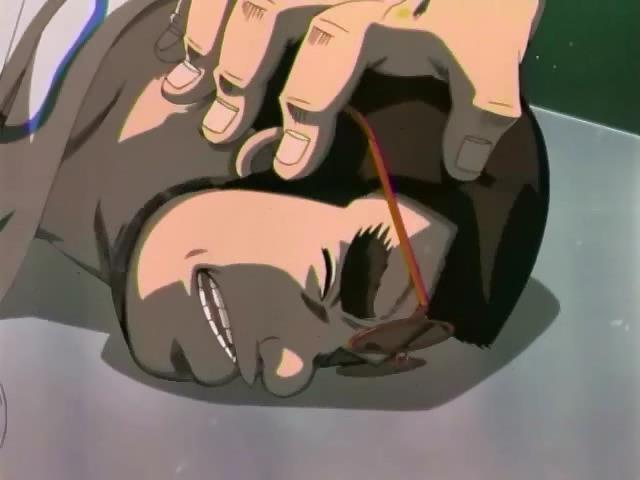 The boss says he can’t call in their rep player just to take care of some amateur punk kid. All Akagi did was pull off a massive cheat – he won’t be able to do it a second time. They’ll defeat Akagi and kill Nangou without the rep player’s help. They all return to the game, with the detective watching. Sadly for the Yakuza guys, they don’t realize just how much Akagi can do.

Will Akagi continue to win? Will Nangou survive the night? How will Akagi deal with the detective on his trail? If you want to find out, watch the second episode! It’s all on Youtube, and I’m sure you can also torrent it if you wish, as Akagi has never been licensed in the US.

If the art style and the subject matter of Mahjong Legend Akagi seem familiar, that’s no coincidence: it’s another Nobuyuki Fukumoto work. Akagi isn’t much like Gambling Apocalypse Kaiji, though, and that’s because of the differences in their respective title characters. Kaiji Itou, the protagonist of Kaiji, experiences fear. He often panics when in a dire situation before realizing exactly how to escape it. Perhaps most importantly, Kaiji makes mistakes. He’s a genius, but a very human one.

All of these things make Kaiji much more relatable than Akagi, who is less a human than a force of nature that destroys everything in its way. Unlike Kaiji, Akagi has no doubts about his abilities and no compunction about using those abilities to completely destroy his opponents. Really, the only thing that makes Akagi not a villain is the fact that his opponents are all gangsters and thugs or other gamblers working for criminal organizations. Except for his final opponent – but I can’t tell you who that is. Just watch the show! I’m not one to claim I have “favorite _____s” usually (I can’t say I have a favorite album, for example, because I love a lot of music) but I can make an exception here: Akagi is my favorite anime series. Not a second of the show is wasted. There’s absolutely no filler, no scenes simply for their own sake – everything moves along the plot or establishes character. And Akagi has plenty of great surprises in store for you if you decide to watch.

Note on the mahjong terminology: If you’re scared off by all the crazy jargon, don’t worry: that’s completely normal. The story does a pretty good job of explaining the whats and whys of everything that’s going on, so don’t worry if you don’t know what a “tan yao pin fu dora dora” is. For this purpose, I recommend getting the Triad subs if you decide to go for a torrent: the notes at the top of the screen explain a lot of the terms that often crop up throughout the series.

3 thoughts on “Anime for people who hate anime: Akagi”