Sometimes I get nostalgic for my old Dreamcast, and when I do one of the games I think about is this one. Skies of Arcadia was released in 2000 and it stands on its own, without any sequels or spinoffs (the Gamecube port with added content, Skies of Arcadia Legends, doesn’t count.) And it’s still one of my favorite games of all time.

Skies of Arcadia didn’t have an especially fresh plot or complex characters or anything like that – it was a pretty standard “save the world” sort of deal, and the characters were, for the most part, either just plain good guys or bad guys. Moreover, a lot of the bad guy characters in this game are of the goofy, sort of incompetent type. SoA did have a nice lightheartedness to it that a lot of RPGs lacked, though, and the characters were genuinely dynamic and fun – just don’t expect any big deep human drama or anything like that. 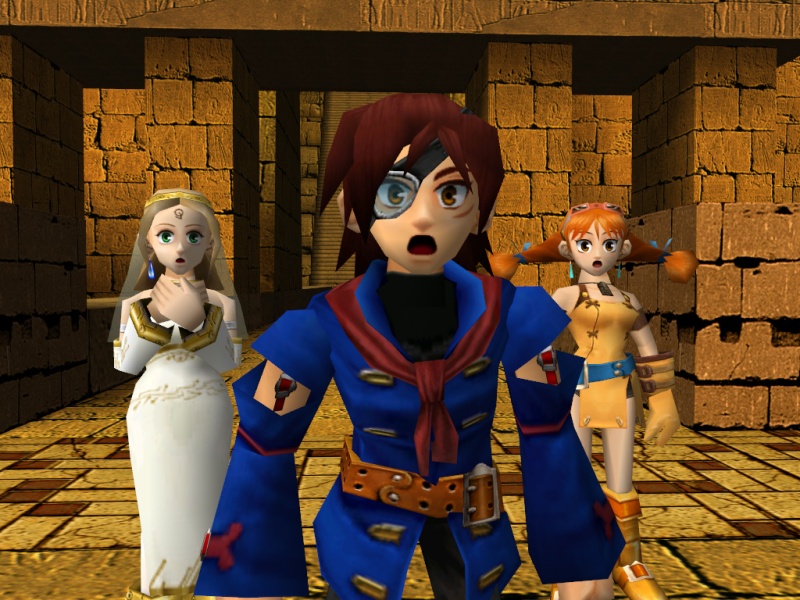 The heroes of Skies. Please don’t laugh at the graphics too much; 2000 was a different time.

But as far as setting went, Skies was unique as hell. The main character here is Vyse, the son of a pirate captain (a good guy pirate, meaning he only plunders bad guys.) Only, as the name implies, these pirates don’t sail the seas: they sail the skies. The whole world of Skies of Arcadia is suspended in the sky, including the land masses and the ships. Imagine the good Pirates of the Caribbean movie, only it takes place a few miles above ground, and you’ll have a good idea of what’s going on here. 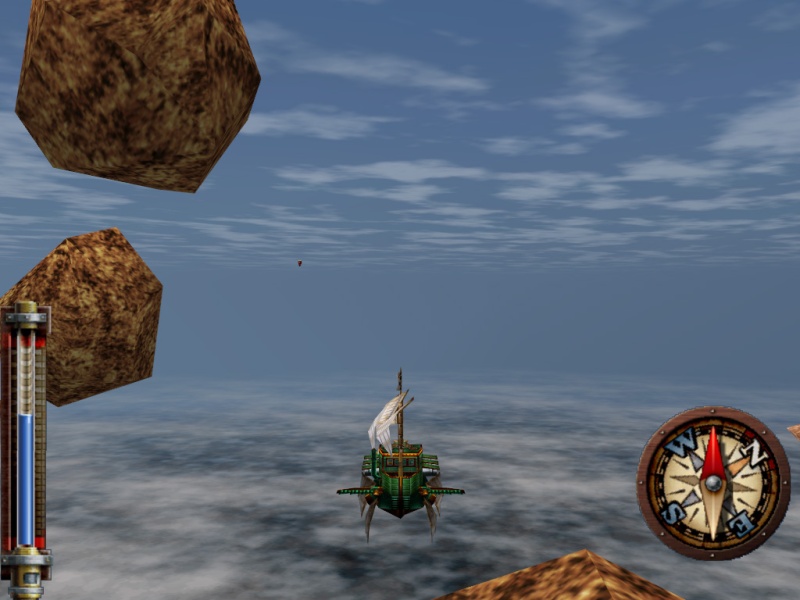 This is your navigation screen while you’re piloting your ship.

There’s no real explanation of how or why everything in this game is in the sky or how it’s all floating up there, and no indication of why the developers decided to set a pirate-themed RPG in the sky. Somehow, though, it all works. SoA offers the player a big world to fly around in (at least for a game made in 2000) with new parts of the map revealed as the game progresses, all RPG style. Your character can dock at ports, some of which are town areas and some entrances to dungeon/field areas. At this point, you set out on foot.

This is generally when you get into fights. SoA’s combat system is pretty standard, but RPG lovers should enjoy it. There are way too damn many random battles, though.

A lot of SoA‘s gameplay is pretty normal turn-based RPG fare. Where the game gets interesting is in its ship battles. At certain points in the game, you will enter into battle with an enemy ship, during which you must choose your ship’s actions (usually you’ll get three or four of them, depending on how many characters are in your active party) against your prediction of what you think the enemy ship will do. Here you’ll have to use some tactical thinking to take advantage of times at which your enemy is most vulnerable to attack and to shield yourself when your ship is weakest in position. You can outfit your ship with plenty of weapon types, including normal cannons, smaller guns that can fire in succession and torpedoes that can hit the enemy up to two turns away from when they’re launched, allowing you to concentrate a lot of firepower at the point where your enemy is exposed to attack. Trust me; it’s all a lot of fun when you actually play it.

Ship battles also feature a lot of “turning point” decisions like this that can change your fortunes for better or worse.

Later on in the game, you can enhance your ship by recruiting crew members who add special abilities to your craft such as added attack, defense and healing. The whole ship battle thing might have come off as gimmicky if it had been shoehorned into the flow of the game or was done poorly, but I think it really ties in well with the story and the action of Skies. 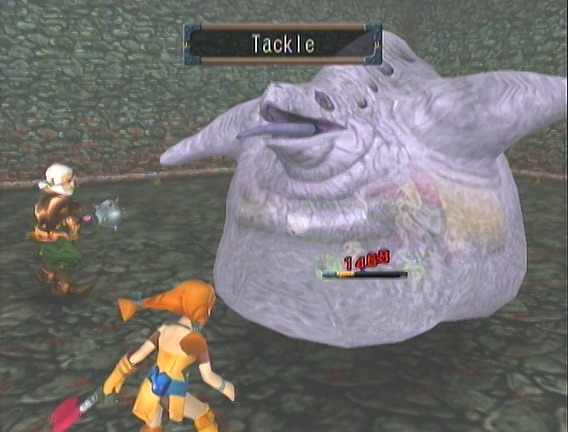 Also, you fight this thing.

Sadly, SEGA never followed up on this classic. I’d guess that it didn’t sell all that well, only that can’t be true, otherwise they wouldn’t have re-released it on the Gamecube with a ton of added content. So what happened? Nobody seems to know. Fans of the game have been badgering SEGA to put out a sequel, or at the very least an HD remake of the original, and SEGA has consistently put off those hopes. I’m not holding my breath, myself.

If you’re looking to play Skies of Arcadia today, you might have a hard time going about it. Both the Dreamcast original and the Gamecube port are currently selling for $150 on Amazon and similar amounts on eBay and other sites. You might notice that this is completely insane. I don’t know why copies of Skies are so rare these days, but they are.

That said, if you have the money to burn and the time to fully enjoy this fantastic RPG, I’d advise you to go for it. Skies of Arcadia is worth it – it offers dozens upon dozens of hours of gameplay and is just a lot of fun.

Or it could just be the nostalgia talking. Either way, Skies was a great game that still holds up today.

4 thoughts on “Retrospective: Skies of Arcadia”