As a 1L at law school, I’ve just gotten through one of the most infamous cases in the standard first year curriculum: Pennoyer v. Neff. Pennoyer was written in 1877 and is the final link in a chain that extends through two lawsuits between a total of three parties involved in a twisted web of unpaid fees, land grabs and weaselly tactics so confusing that the Supreme Court had to create new law just to settle the matter. Pennoyer is a definitive case in the history of personal jurisdiction in the US despite the fact that it’s been upended by later cases like International Shoe Co. v. Washington (which I have to read this weekend.) That’s what my Civil Procedure professor tells me, at least.

But Pennoyer is more than seven pages of drudgery in a casebook. It’s an interesting story in its own right. It involves one Marcus Neff, a guy we don’t know much about except for the fact that he sought out some land in Oregon pre-Civil War and his claim was held up for well over a decade. Neff hired John H. Mitchell, a prominent Portland-based lawyer, to take care of the paperwork. For a reason the casebook doesn’t explain, Neff never paid Mitchell and absconded to California, which was where he was when Mitchell sued him in Oregon state court for his outstanding fees. Mitchell won a default judgment after Neff didn’t show up to court. Not that Neff had been negligent of his duties – the Oregon court had published Neff’s summons in an Oregon paper, printed and circulated in a place that Neff would have never found because, well, he was in California. 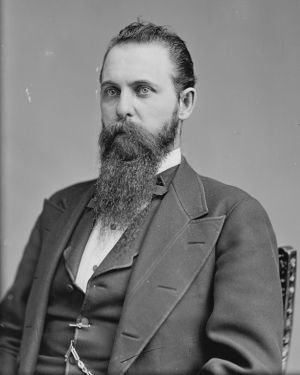 Thus bringing us to the most interesting character in the story. John H. Mitchell was originally John M. Hipple of Pennsylvania. He started out as a teacher, but apparently succumbed to the charms of one of his students, because he ended up impregnating a 15 year old girl under his charge (apparently this wasn’t illegal in Pennsylvania at the time.) The 22 year-old Hipple was subsequently forced into a marriage. Sadly, things didn’t go so well for the new couple, and after taking up the law as a profession for a few years, Hipple took off to the newly conquered West with a new lover, another schoolteacher, in tow.

This new relationship didn’t last either. When they reached California, Hipple (now Mitchell) left his paramour behind because she’d come down with a terminal illness. What a guy.

Mitchell ran off to Portland, Oregon, where he established another law practice.

Here Neff met Mitchell and the shit went down. Mitchell ended up collecting his unpaid legal fees from Neff by having the state court confiscate and sell Neff’s property in auction. The man who bought Neff’s property just happened to be Sylvester Pennoyer, future governor of Oregon. Neff soon found out that his land was in the hands of another man and sued Pennoyer, claiming the sale of his land resulting from Mitchell’s default judgment win was invalid.

I could go on, but it’s enough to say that the case went to the U.S. Supreme Court, which ruled that the Oregon court in the original lawsuit had had no personal jurisdiction over Neff, since he was in California and hadn’t been served proper notice (service by publication doesn’t count if you’re an out-of-stater) and that, much more importantly, Neff had bought his land after the Mitchell judgment and therefore the sale was invalid. It’s all supremely confusing, but I think I get the gist of it now.

This case is an essential one for several reasons. It’s a definitive Supreme Court case defining personal jurisdiction, but it’s also a fascinating personal drama. And as a fellow teacher-turned-(prospective) lawyer, I can feel some camaraderie with John H. Mitchell. Minus the whole part about knocking up his 15 year-old student and abandoning his sick lover and all-around being a scumbag deal. Then again, being a scumbag didn’t stop him from being elected to the US Senate three times, so hey. Whatever works.

P.S. – If you’re a law student looking up info about this landmark case, welcome to my site.  I wrote this article back when I was a 1L.  Now I’m an attorney, but I still write about video games as a diversion.  It’s more fun than writing on a law school journal, that’s for fucking sure.

I just wanted to wish you luck at law school and to say that I’m sorry that you’re currently in law school.  You really have no idea yet what you’re facing, even if you think you do.  And be sure to take as many bar-related courses as you can in your second and third years.  You’ll be thankful that you did once bar review time comes around.